I've been beavering away on my 6mm Americans and have just given the vehicles a dark wash to bring out the details.

As I have a terrible habit of losing the notes I make on paper regarding this kind of thing, I'm putting the formula on here so that I can find it again.  It was something like this:

6 drops of water,
4 drops of Klear,
3 drops of Devlan Mud wash,
half a matchstick stir of Tamiya Nato Black (XF-69)

The tracks and running gear were given an earlier wash, 50/50 Tamiya Smoke and Gunze Sangyo Mr Hobby Retarder Mild.

Here then are a couple of WIP shots to give an idea of how they are coming along. 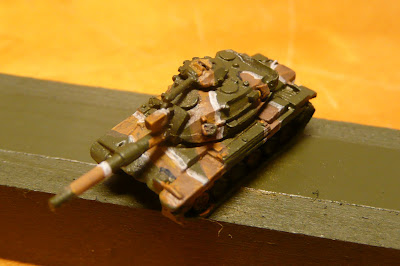 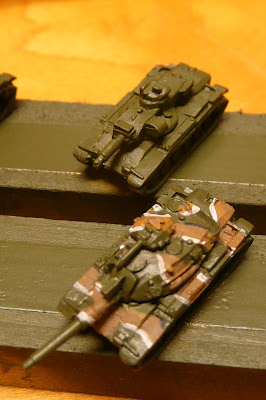 The last one shows an undercoated M60A2 for contrast's sake.

I'm enjoying painting the 6mm much more than I anticipated.  So far I've found it very rewarding, and as there are a lot fewer stages to go through compared to my usual 15mm figures seeing them progress so quickly is great for the motivation.

Next up will be a drybrush, some weathering, a painting in of the guns and then it will be time to start on the infantry.