From way back: photos of first hobby efforts.

My wife was looking through some old photo CD-ROMs the other night and came across a folder containing shots from the very first batch of figures I ever painted, waaaay back in December 2005.

This find seemed like a good excuse to reminisce about first starting out, and some of the changes that have occurred. 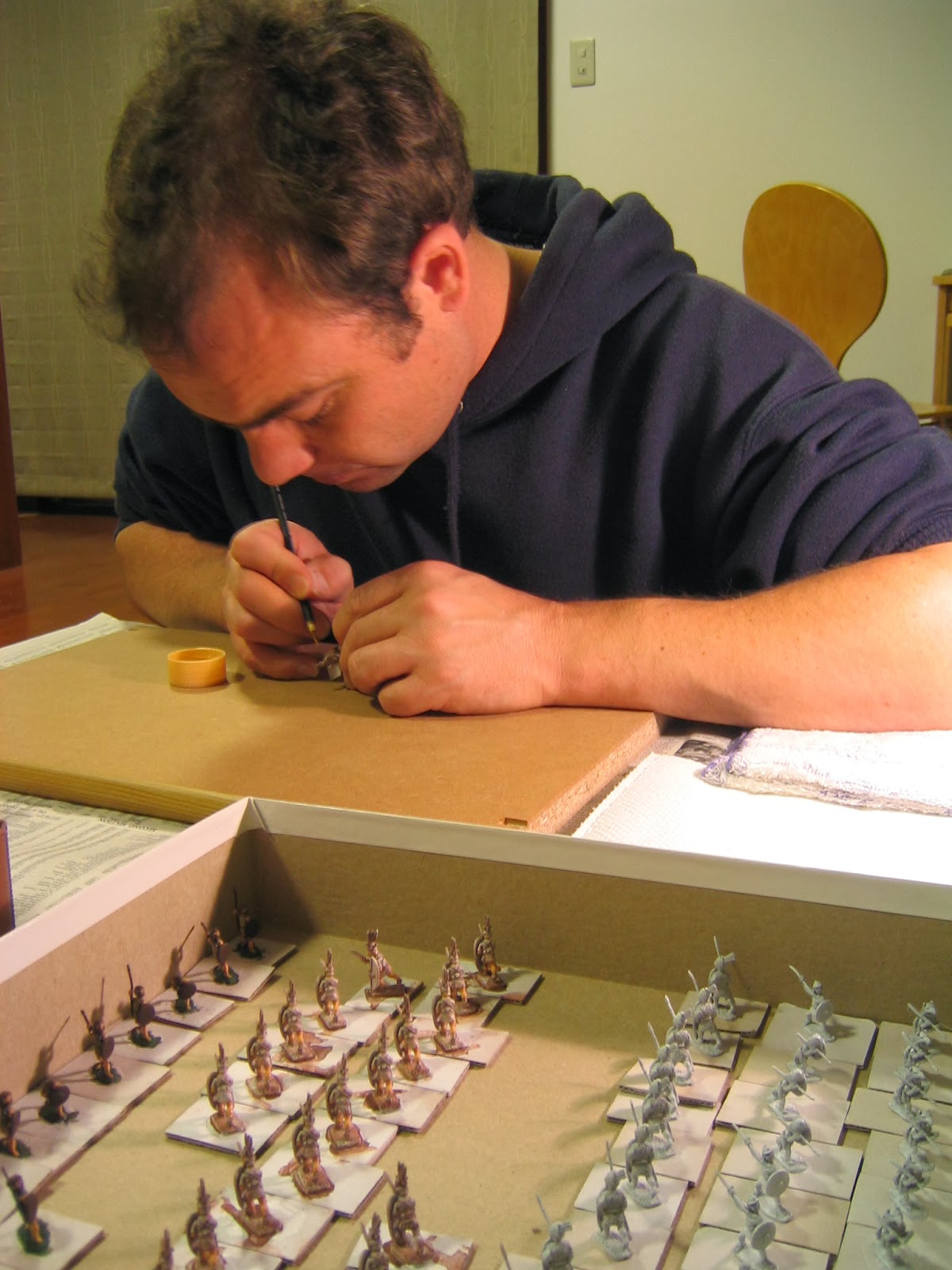 The shots on this album are the only known photos of me painting, and I didn't even know about these until the other night.  The figures are from the Chariot/Magister Militum Polybian Roman and Later Carthaginian ranges.  I began with 2 DBM starter armies and built up from there, and Richard at MM was really helpful to a newbie.  If I remember rightly these figures were then £1.85 a pack; they are now £3.00, but the DBM armies still give a surprisingly good discount.

Other nerdy things to note: these days I mount figures on card in groups of 4-8 rather than individually.  I actually use lighting, and even lift the figures up to my face  rather than the other way around!  I also use the hobby room instead of the lounge.  We have had three kids since these photos were taken and the lounge is now a little too messy to be shown to decent company...

Amusingly enough, I seem to be employing the lid as a paint dish here.  I still use Tamiya and Mr Color paints occasionally (then ￥100, now c.￥150), but they are mostly supplanted by Turner Acryl Gouache.  My choice of brush has not advanced much, however.

Lastly, I have considerably less hair now than I did then, and am probably about 5kg sturdier.  But we won't dwell on that just yet... 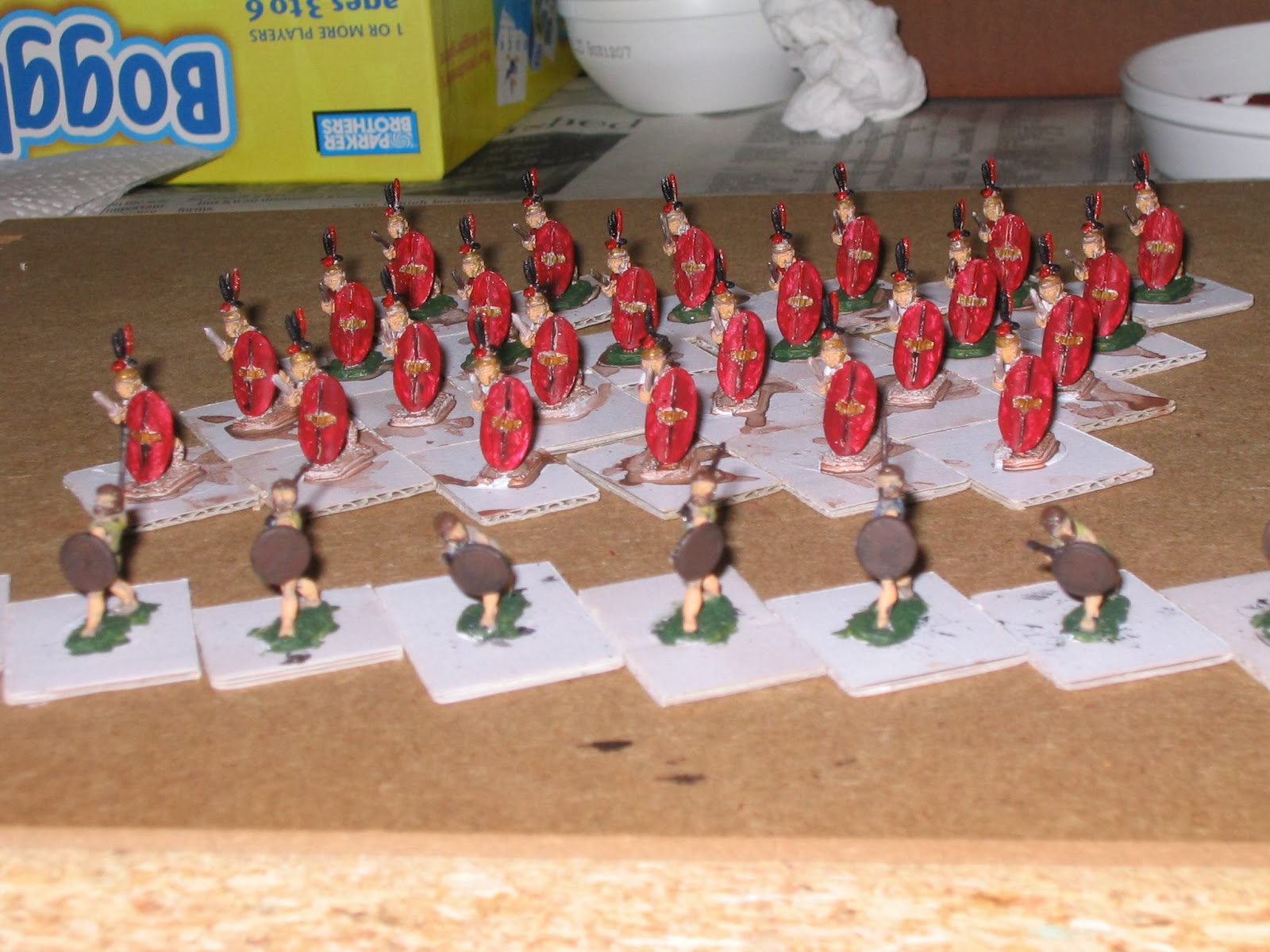 Look at this for sublime artistry!  Close observation will reveal the signs of early experimentation with a 'magic (brown) wash' on the hastati at the back there.  It is not clear whether it did any good or not. 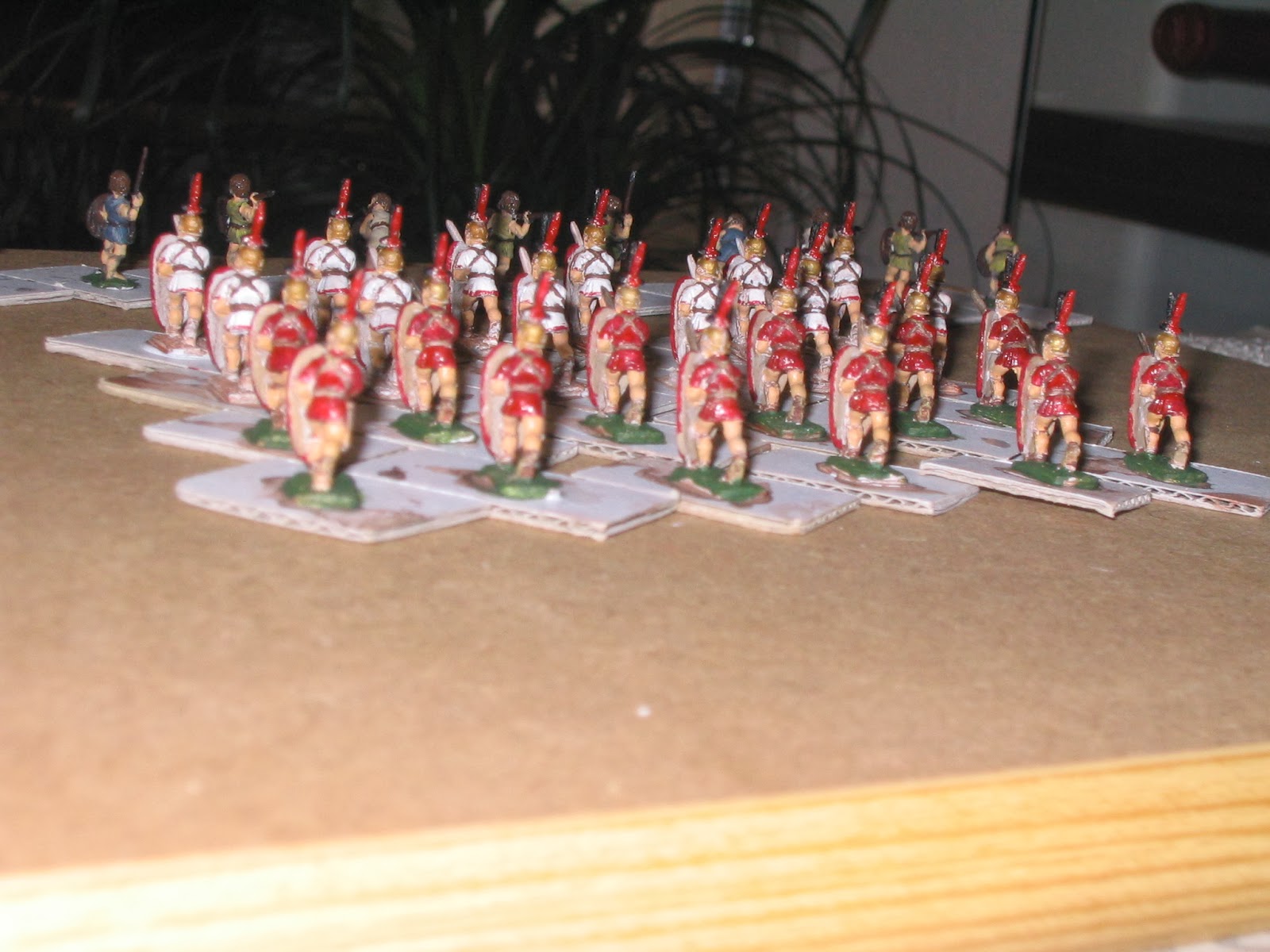 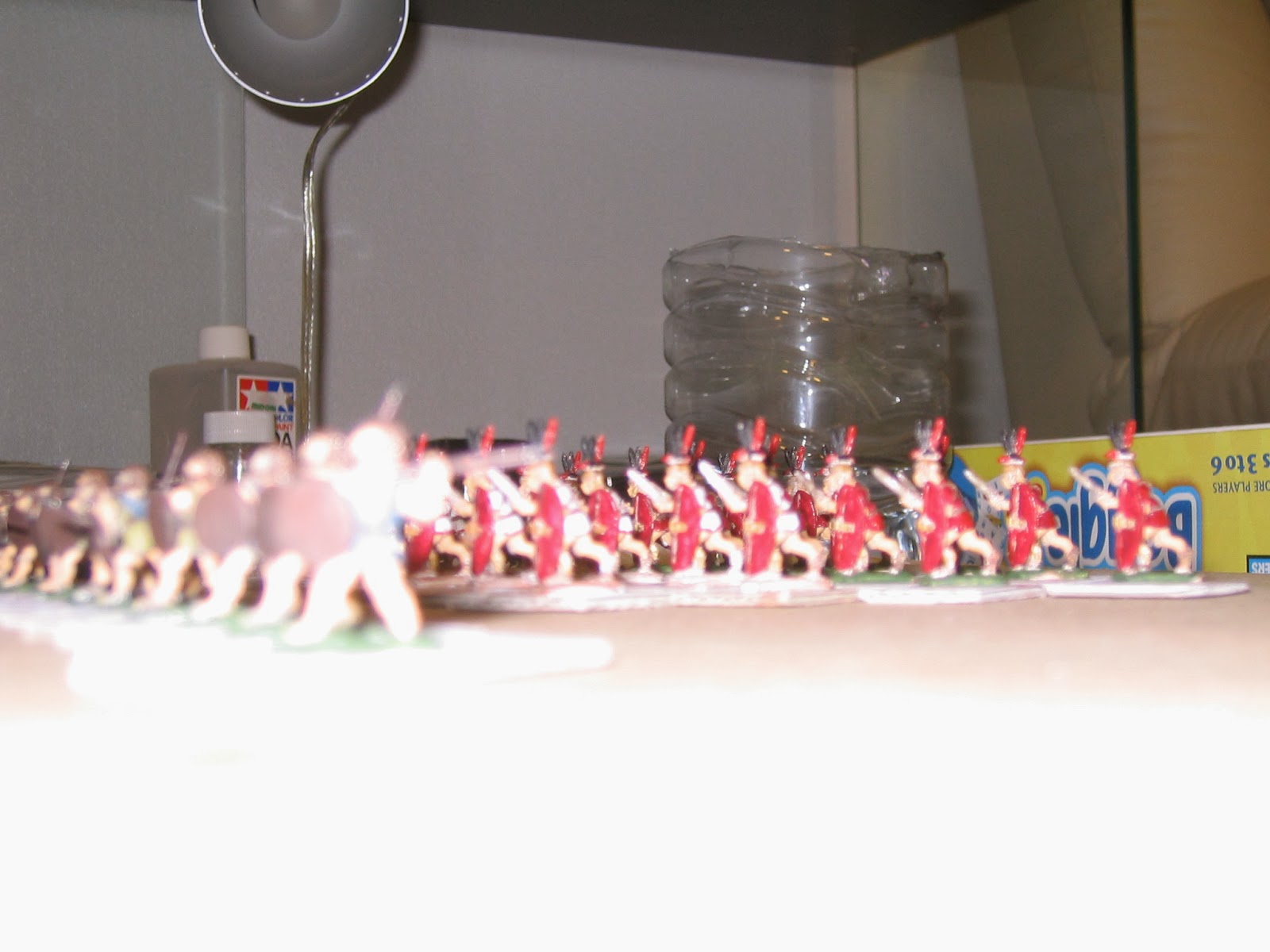 Ah, such innocence in this low angle shot!  We have a better class of digital camera now.  Sadly, that Junior Boggle box has gone the way of all flesh... 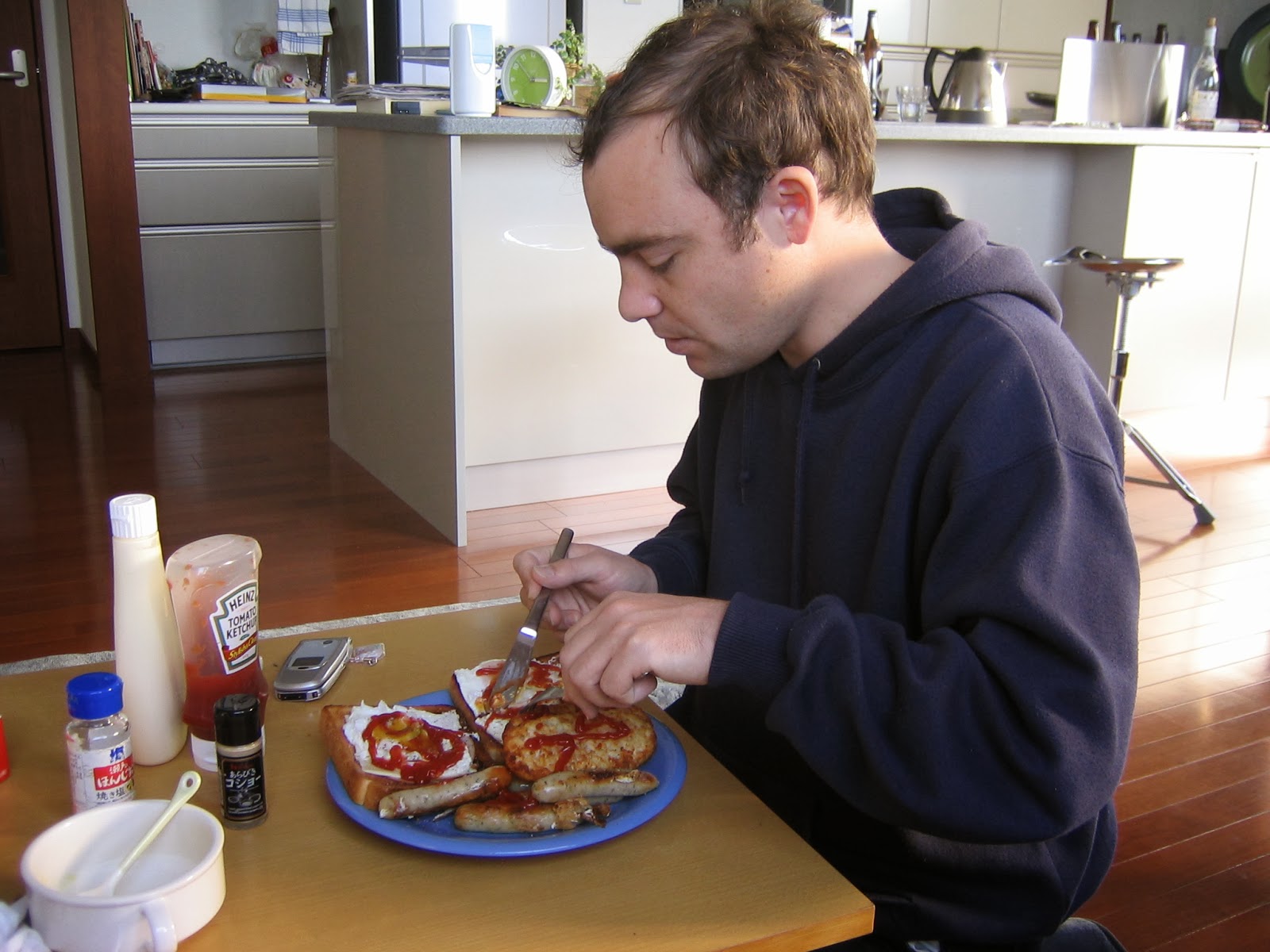 An intriguing morning-after clue to how I became 5kgs heavier? 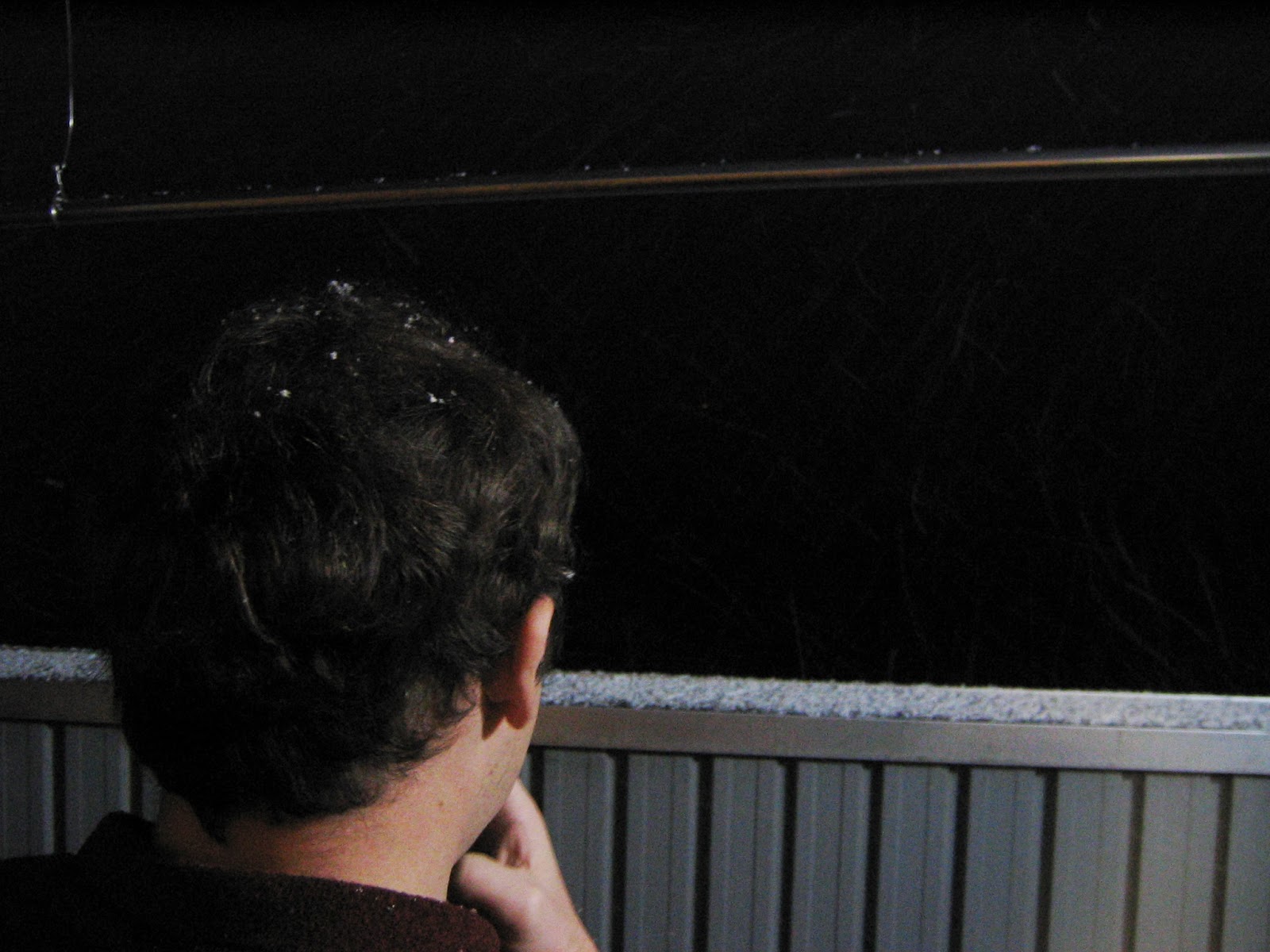 But on a more positive note, I no longer indulge in my other 'head out to the balcony every hour and light up' hobby, so perhaps it all evens out!

So, there we go.  I had a wee chuckle looking at these, and I hope you will too.

Oh, and before I go, here's a shot showing today's postal goodies, just to prove that some things haven't changed! 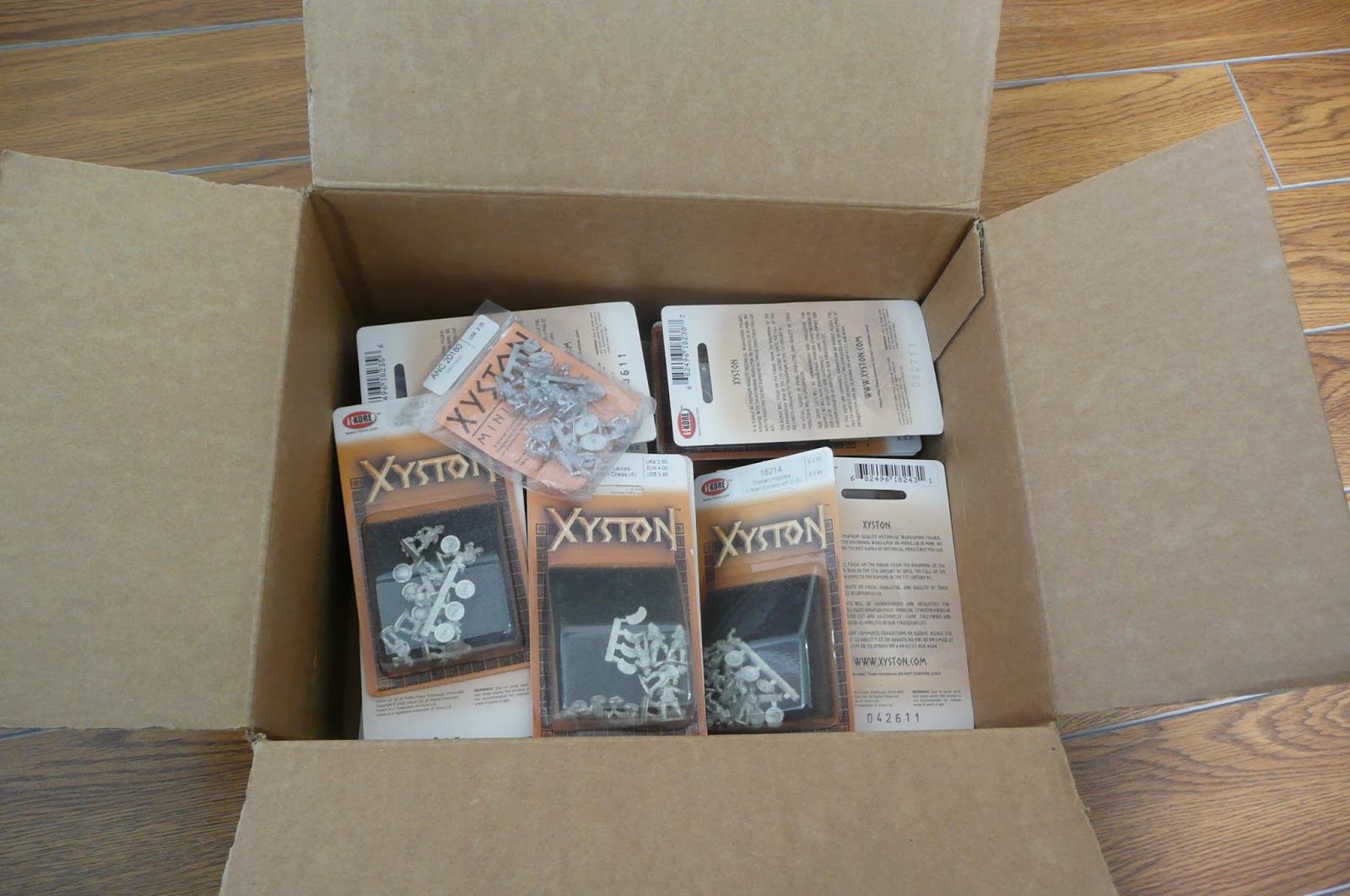 Email ThisBlogThis!Share to TwitterShare to FacebookShare to Pinterest
Labels: blast from the past, miscellaneous

I've recently been playing one of my Christmas presents.  I'm enjoying it but as the plan is to do a review on it at some stage I won't say too much at the moment. 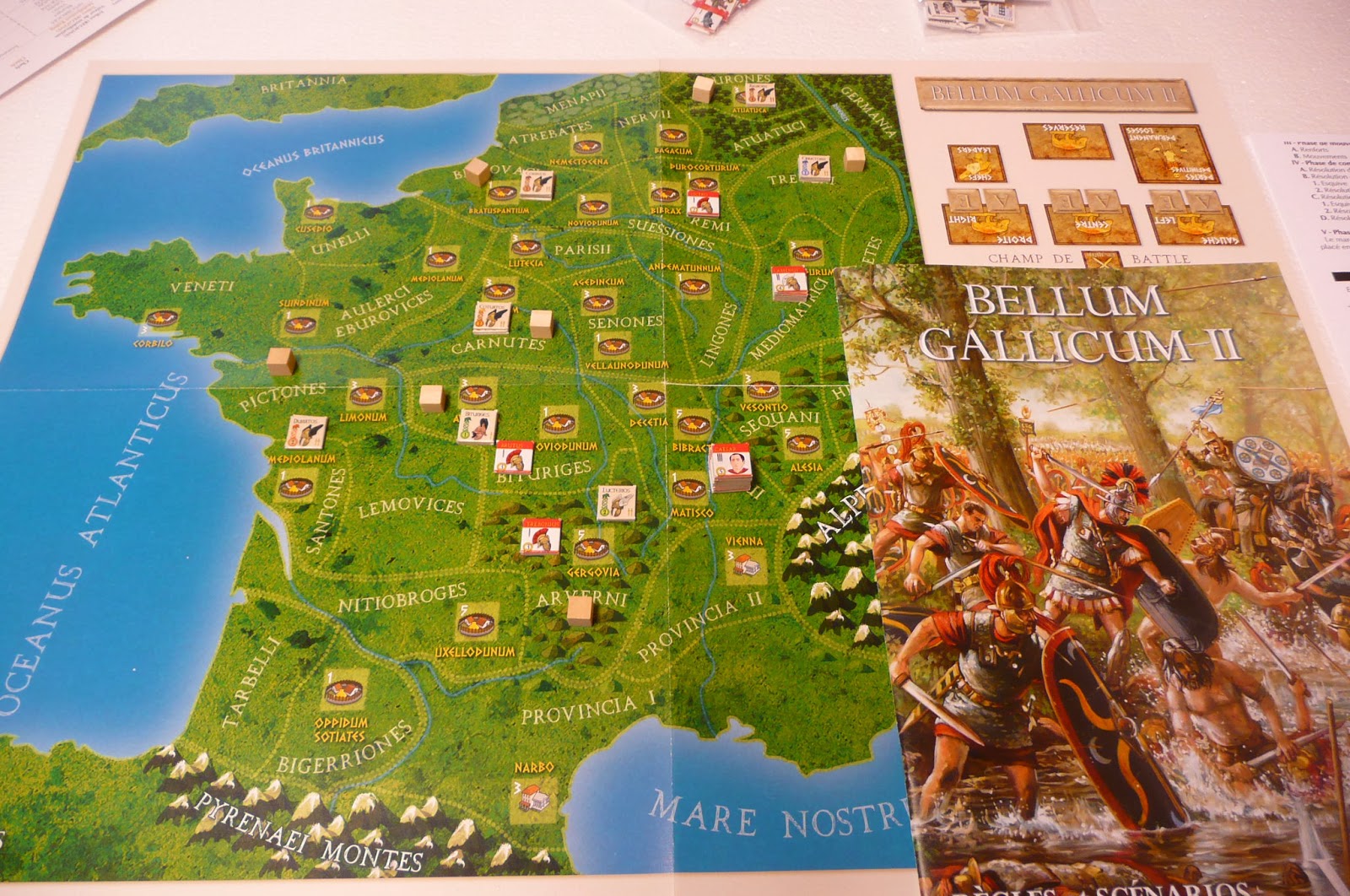 I will say though that due to the scope of the game and the limited number of counters occasionally the named leaders for the Gallic tribes are a bit out of place in a given scenario. Being a Caesar freak I couldn't take that and decided to make up my own counter for brave Dumnacus.  I'd taken a counter scan before cutting the counters out, so used Microsoft Paint to do a bit of wizardry and ta-da!  What a genius!

I then did the same thing with the obverse, saved and printed out.

I was all very proud of myself until I realised that as well as saving the doctored images separately, I'd stuffed something up and saved the improvised ones in place of the original counter scans, too.  Ta-da!  What an idiot!

There's a fine line between stupid and, uh, clever, as Nigel Tufnel and David St. Hubbins so famously said...

Well, today has been a good day.

An order I put in with Brookhurst Hobbies for some of their Xyston clearance packs has been confirmed and they had nearly everything I was after.  In addition, this morning there was a break in the cold weather and I managed to prime some Strategia Nova Samnites and all of the Old Glory Marian legionaries I need to complete my armies for Caesar's wars against the Optimates.

I am well satisfied and now all I need to do is paint them!

It sounds so easy when you put it like that...
Posted by Prufrock at 2:32 PM 2 comments:

This is just a quick comparison for an Ancmed member who is wondering about figure compatibility. 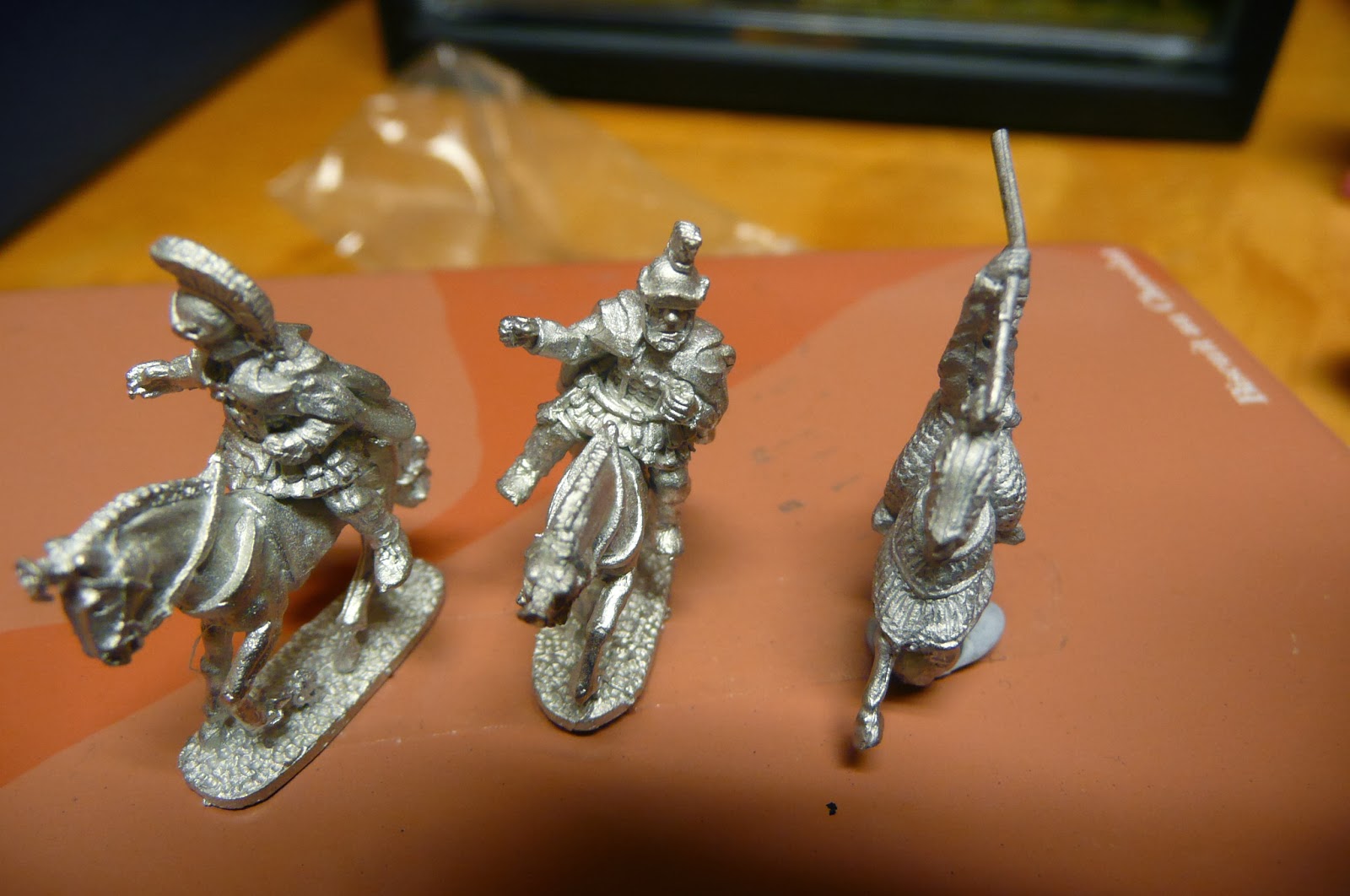 Xyston Persian command centre and left; Essex on the right. 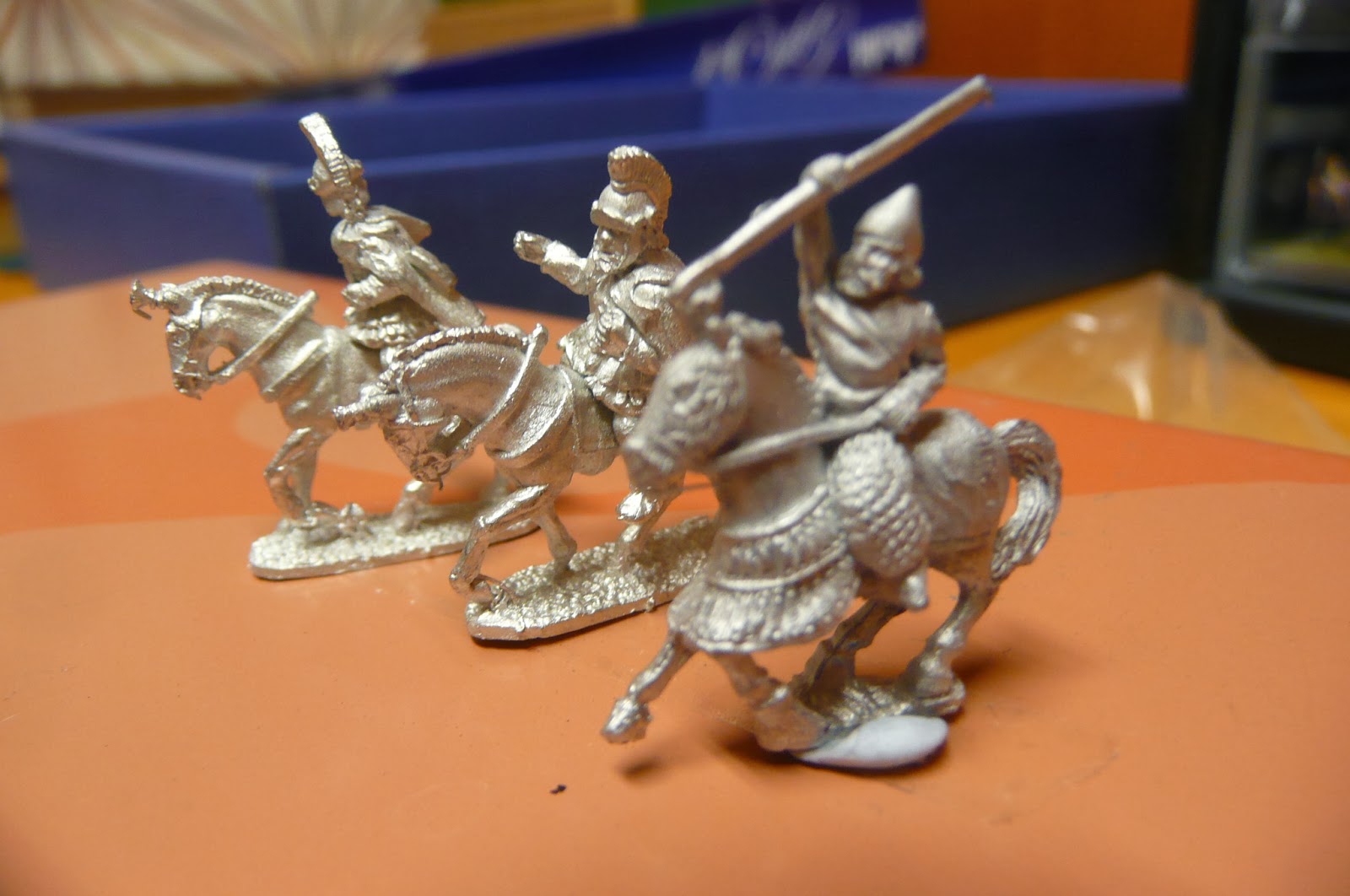 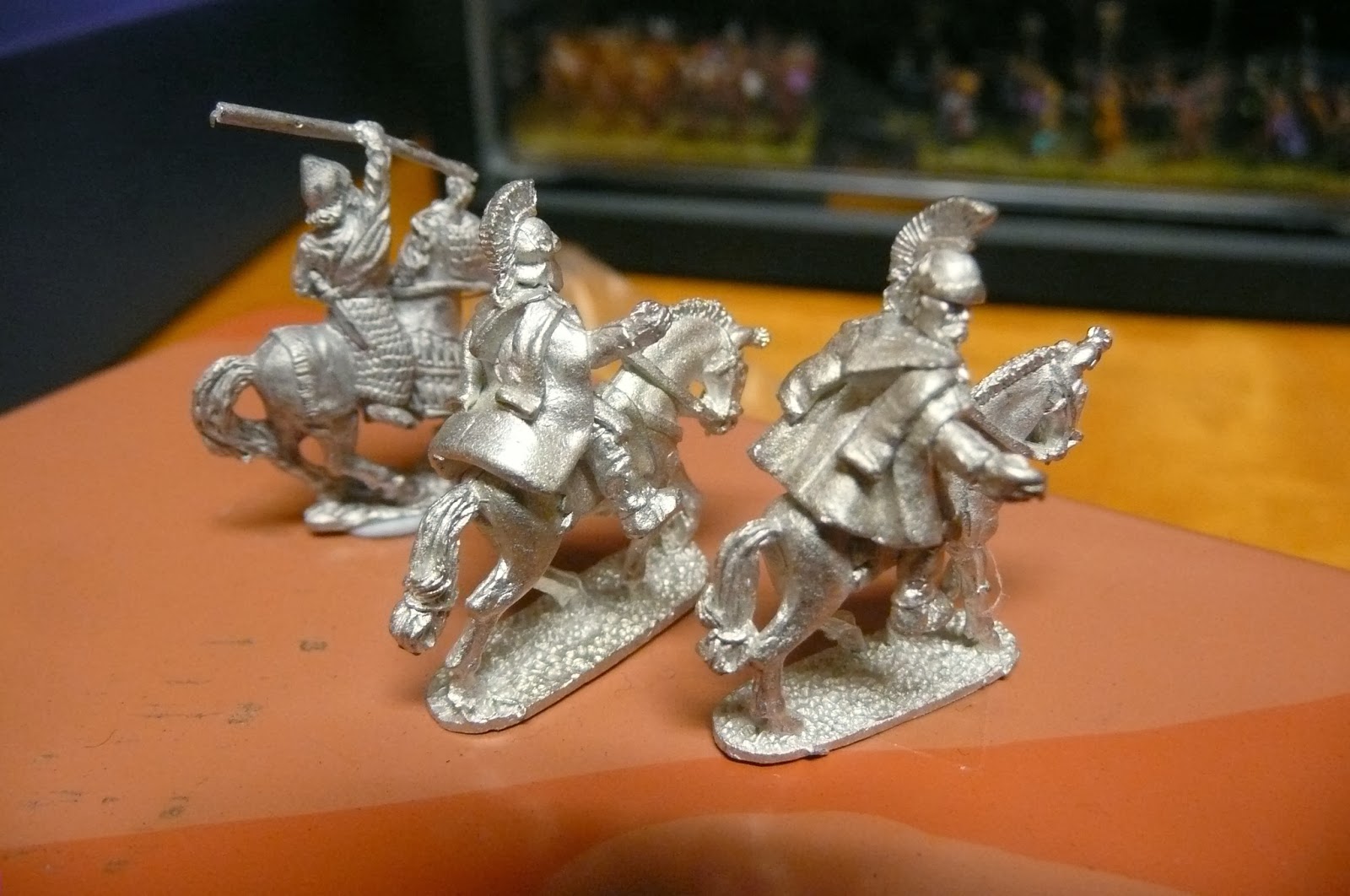 From the rear.  Xyston figures are chunkier, but I don't think unreasonably so. 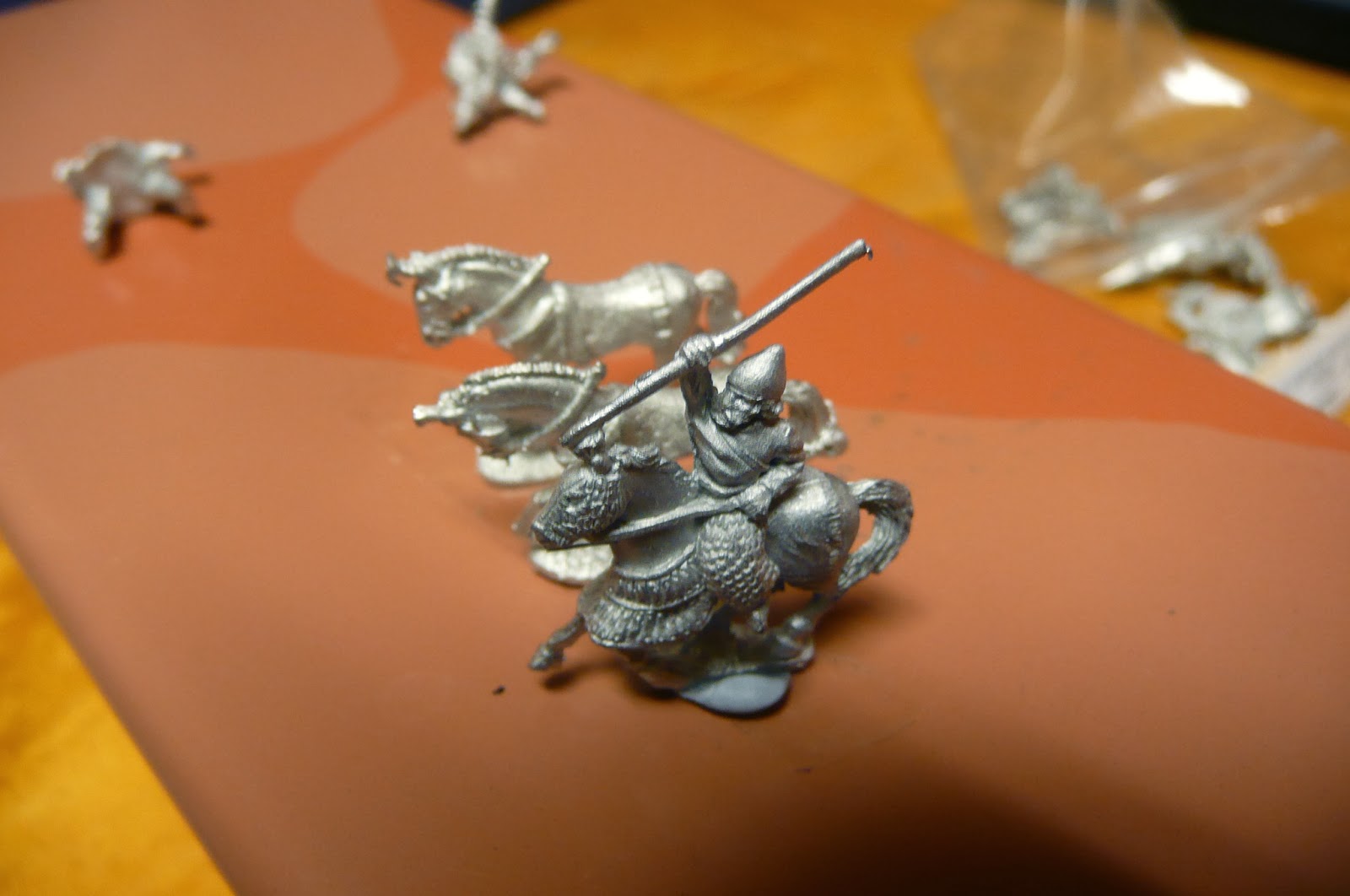 The horses: Xyston slightly longer, but the height is about the same. 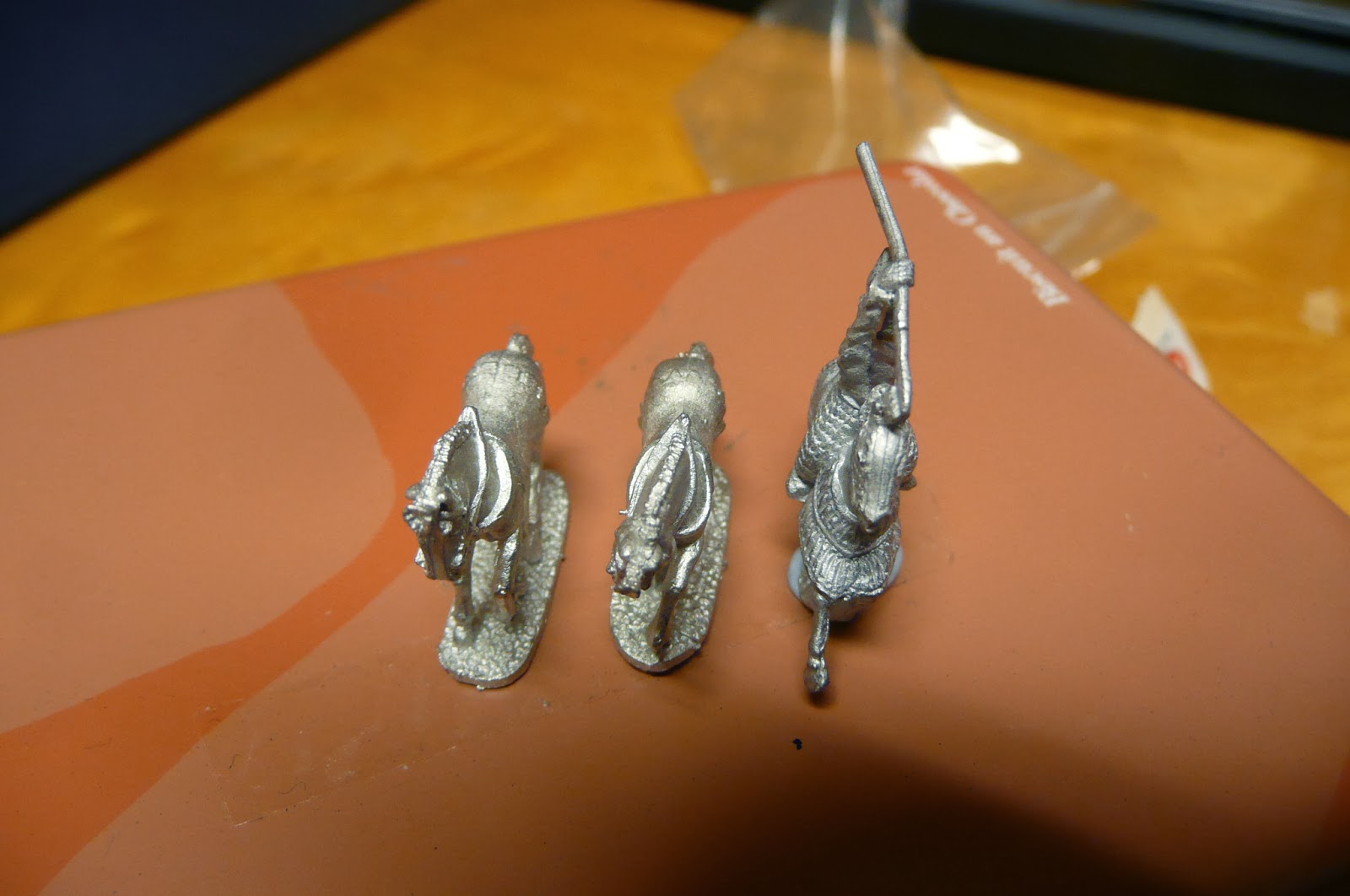 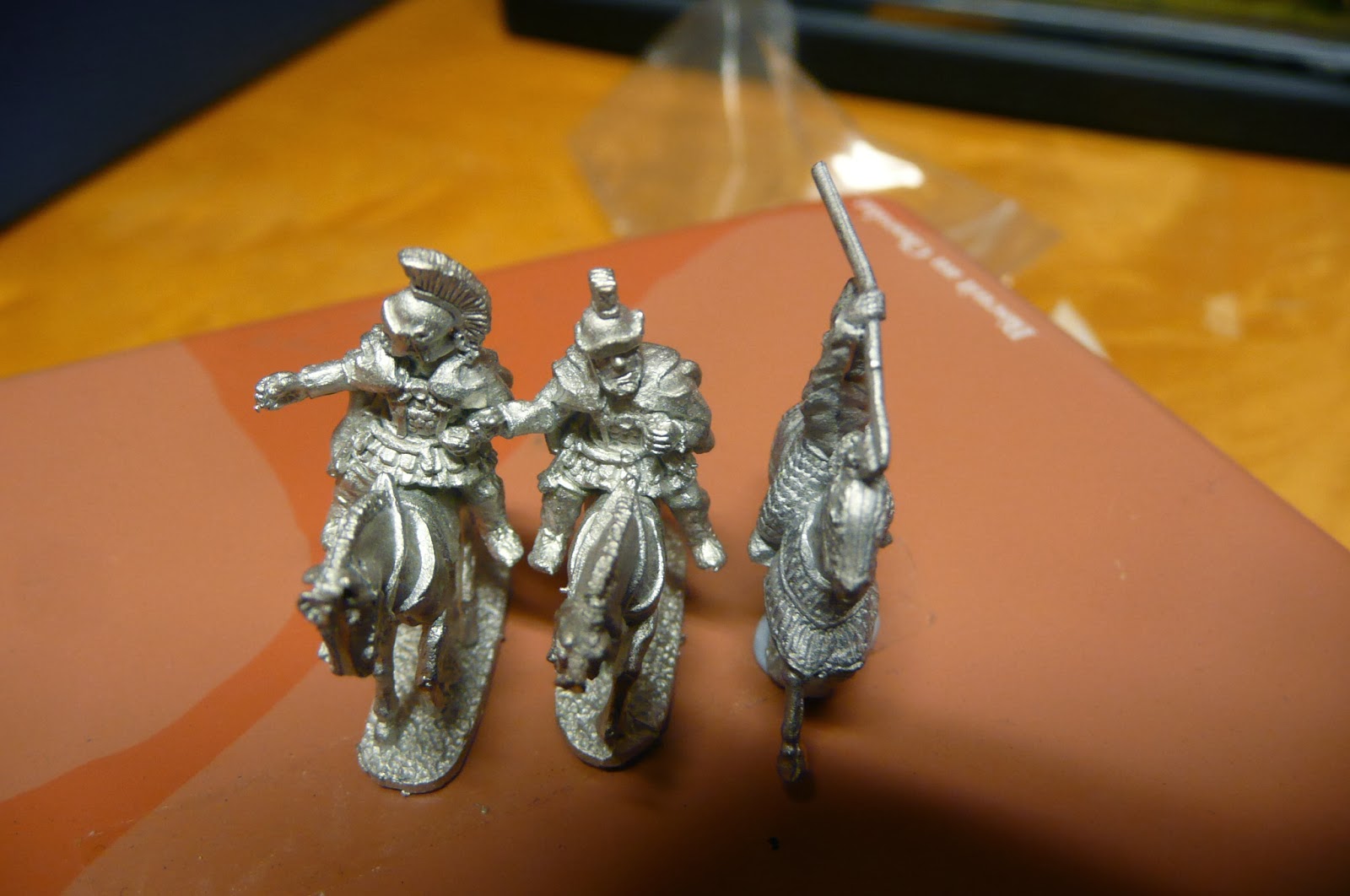 Some more from different angles. 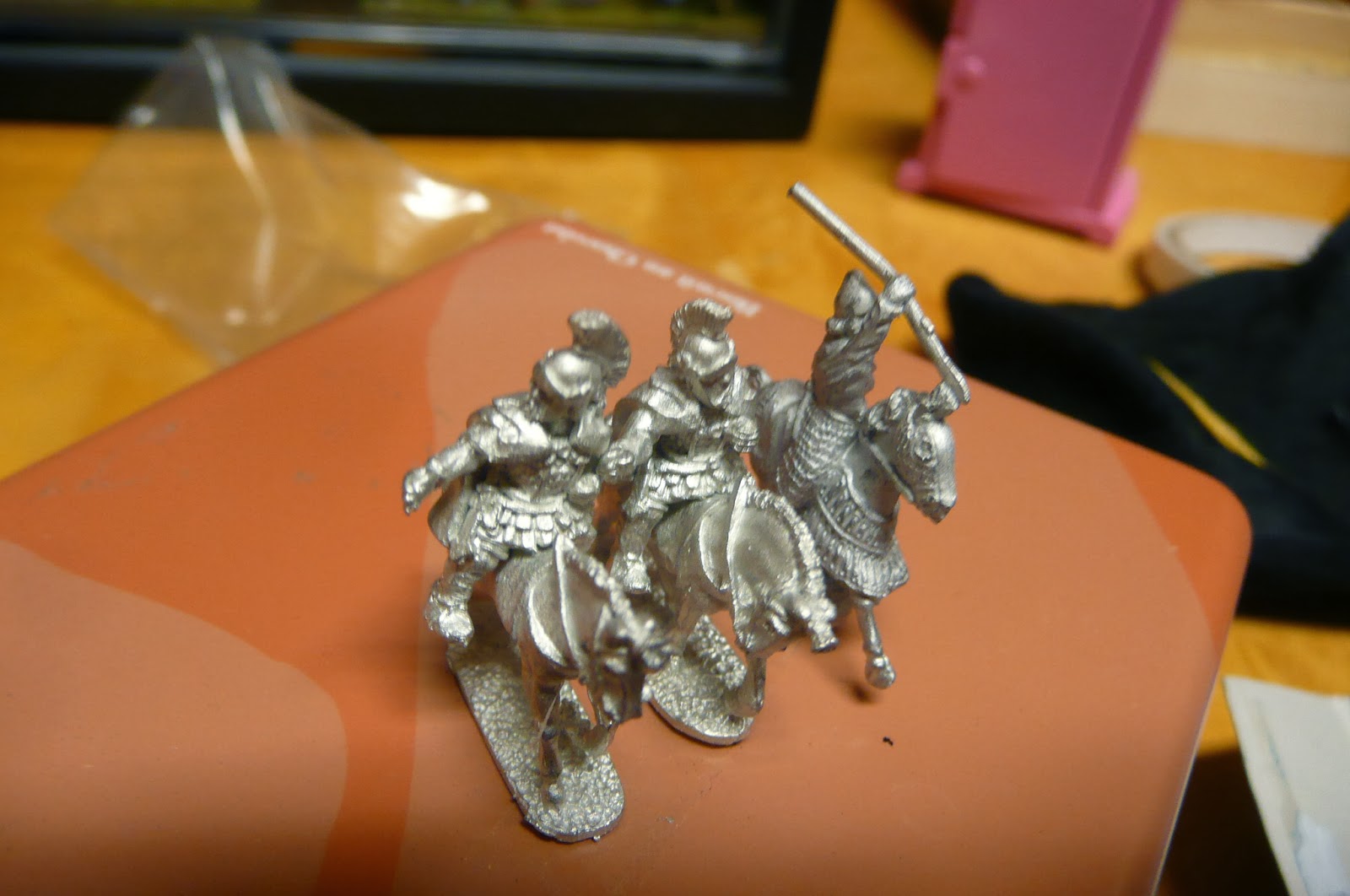 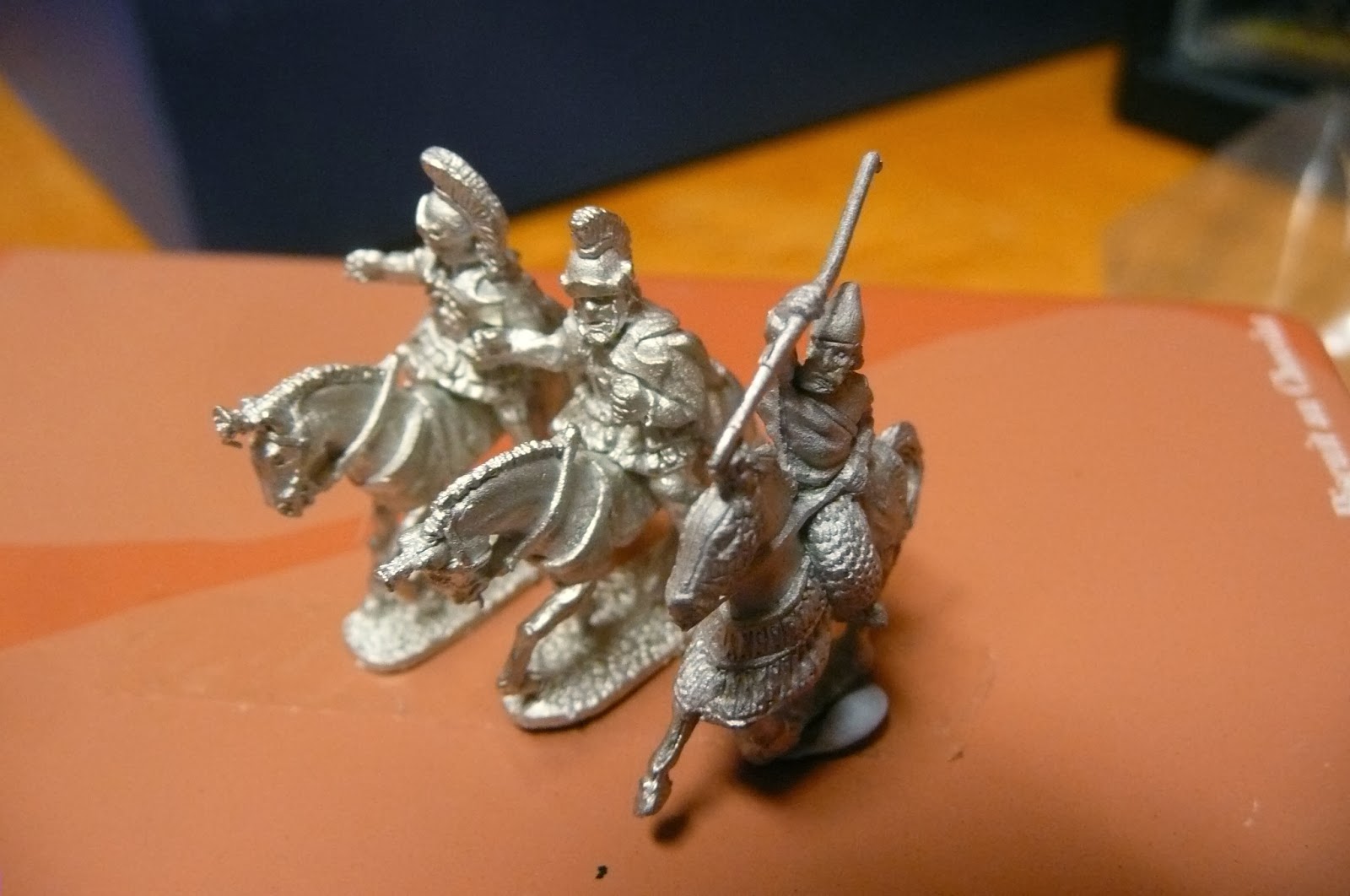 My conclusion is that they'll go together fine - especially being well-fed and caparisoned commanders - but I'm less picky than some!
Posted by Prufrock at 1:26 AM 7 comments:

In December 1979 the 1st Brigade of the US 3rd Infantry Division was tasked with hitting the flank of the advancing Czech 15th Motor Rifle Division and stalling its approach to the Main River.


Accordingly, the commander laid plans to do just that.

The forward deployed 3/7 ACAV troop, on the scene at daybreak, was ordered to advance to the Main and follow it north until it encountered the enemy. 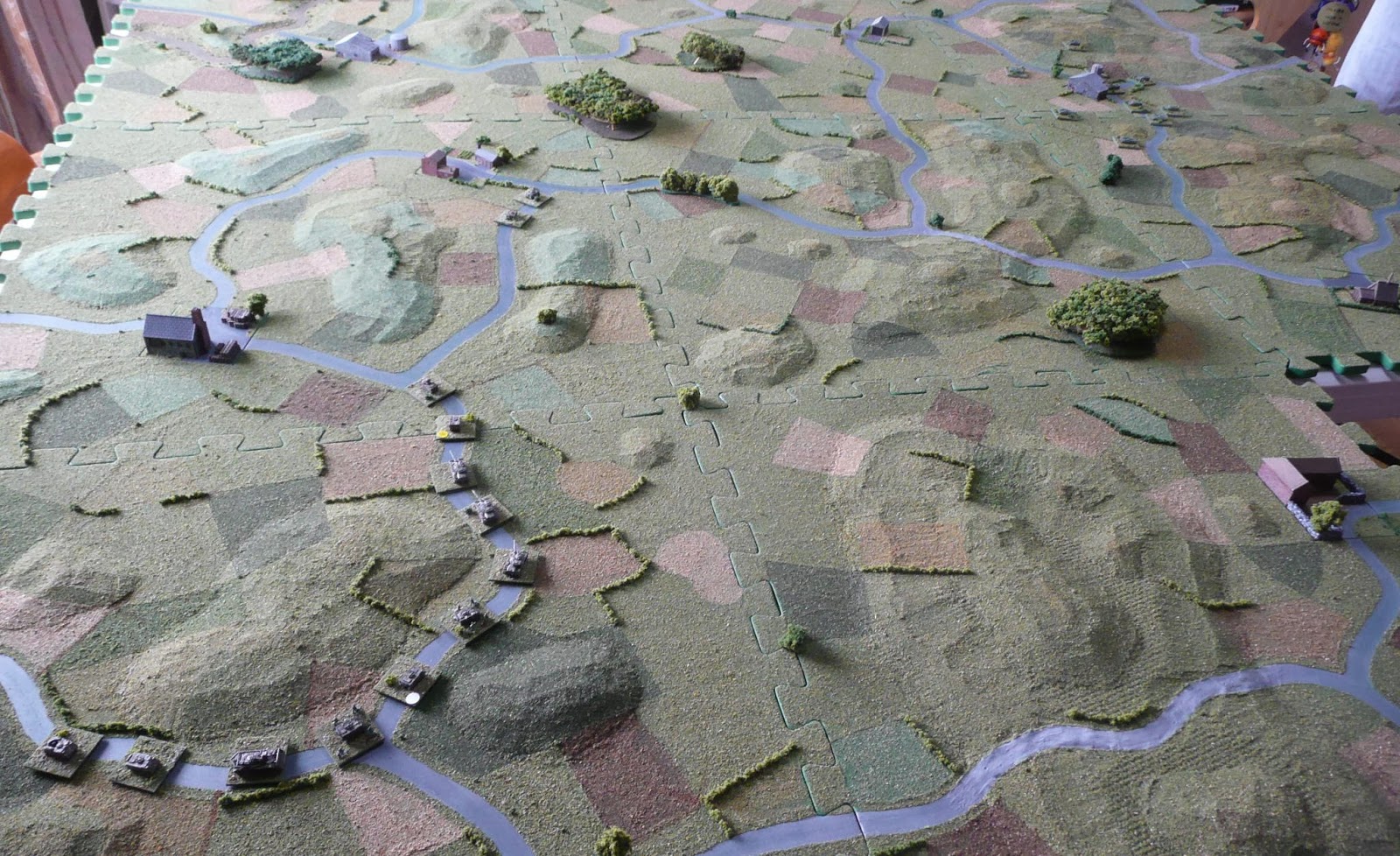 But in a shock to the ACAV's recon elements, it happened that the Czechs were closer then anyone had thought... 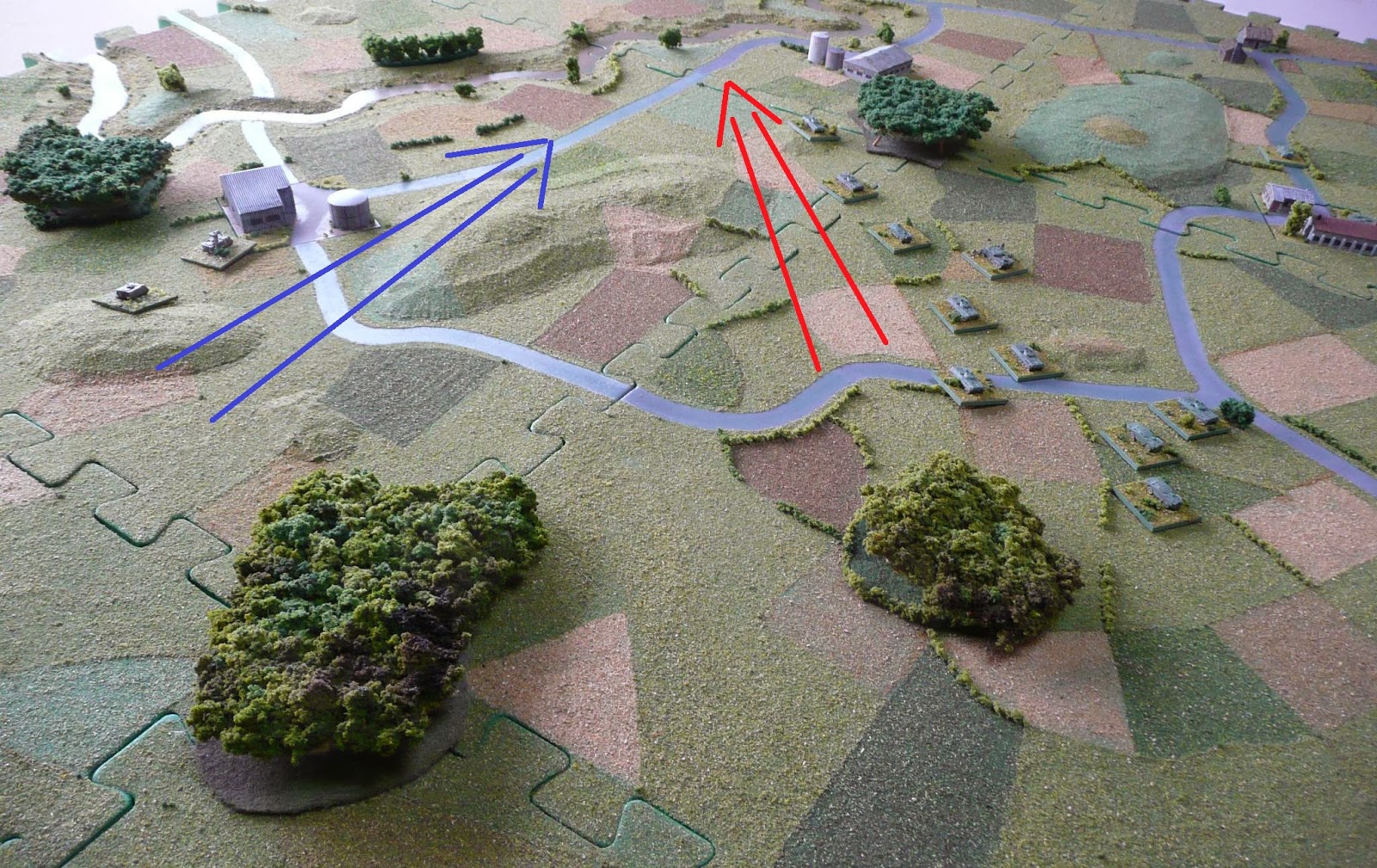 As the lead recon units began to trade fire, other Czech units were making their way to the combat zone. Thankfully for the Americans, heavy rain turned the fields into boggy hindrances to the Czech advance. 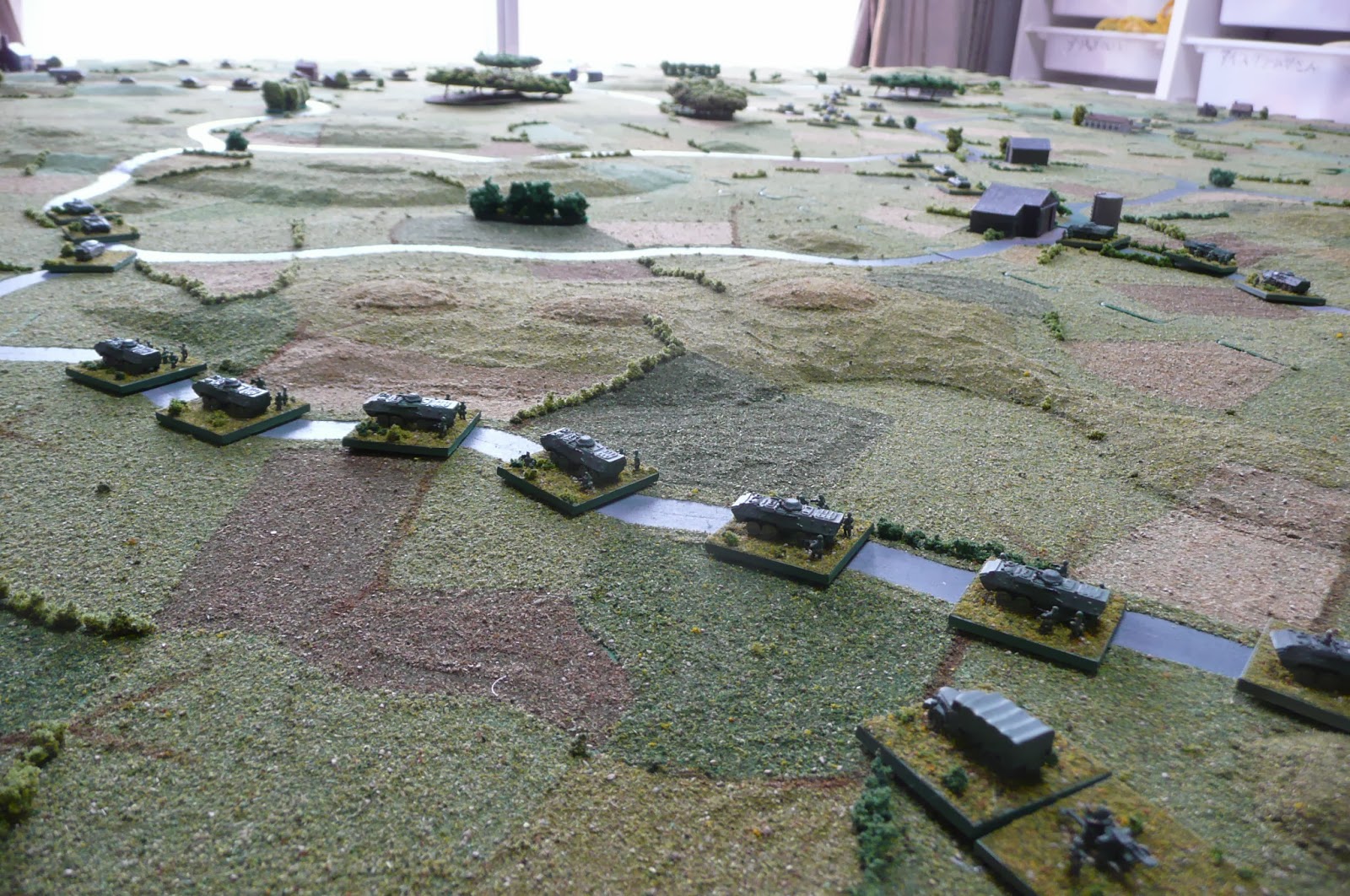 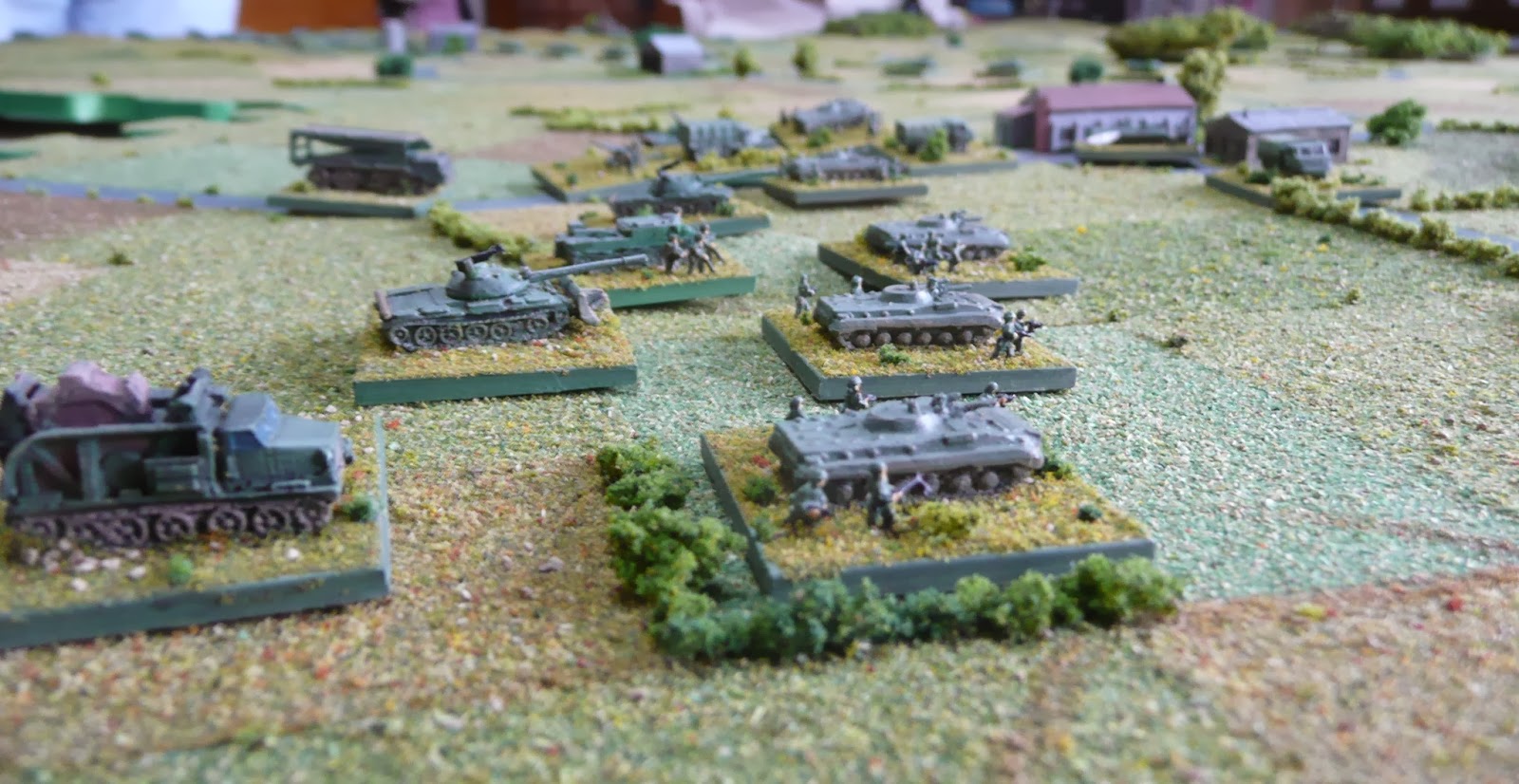 1/30th Battalion arrived in time to provide the firepower needed to halt the initial Czech attacks. 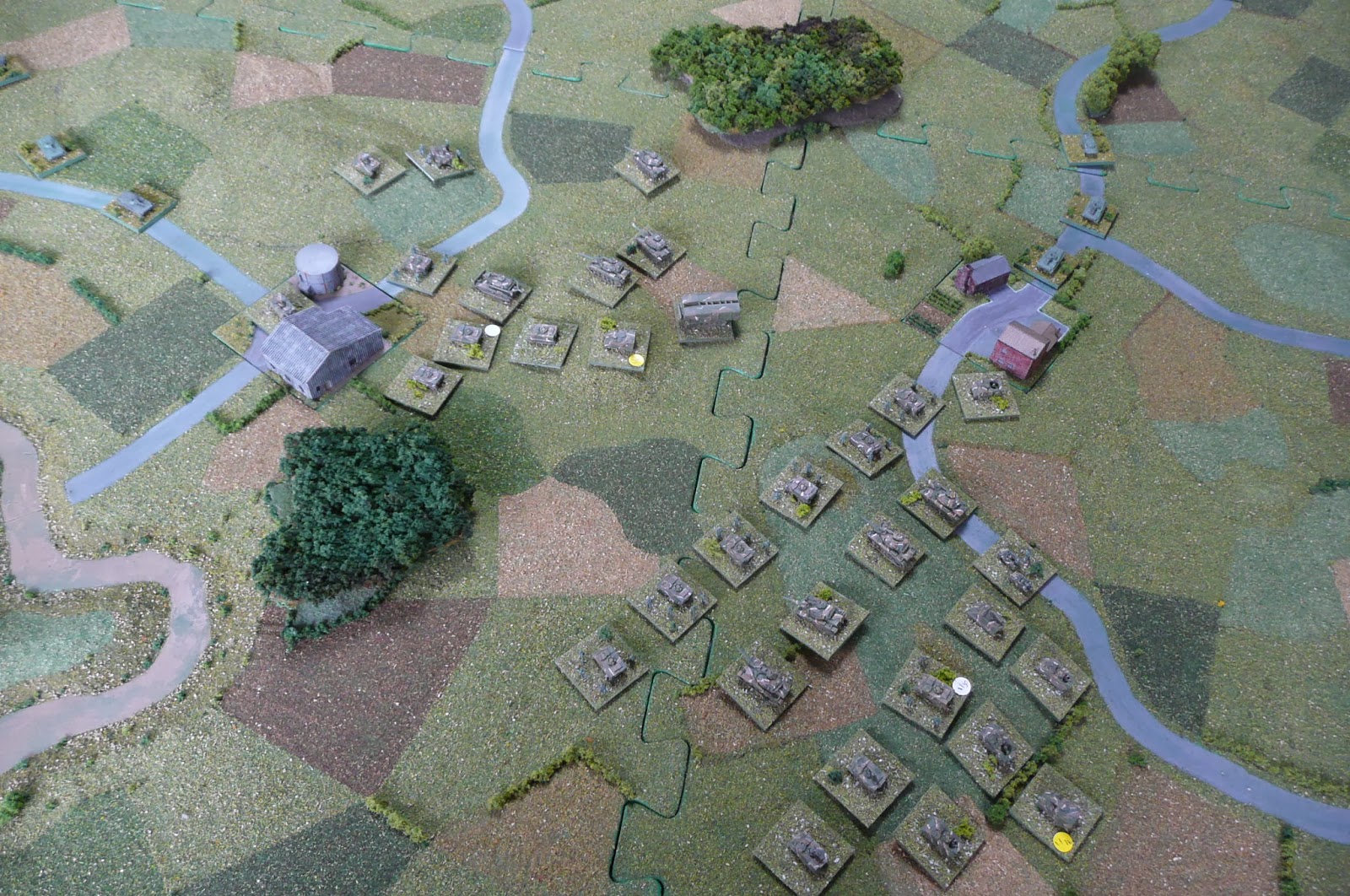 But with the AVAC elements tied up in a firefight there was nothing to stop the Czech advance to the river further north.  The bridging equipment in evidence gave notice of their intentions... 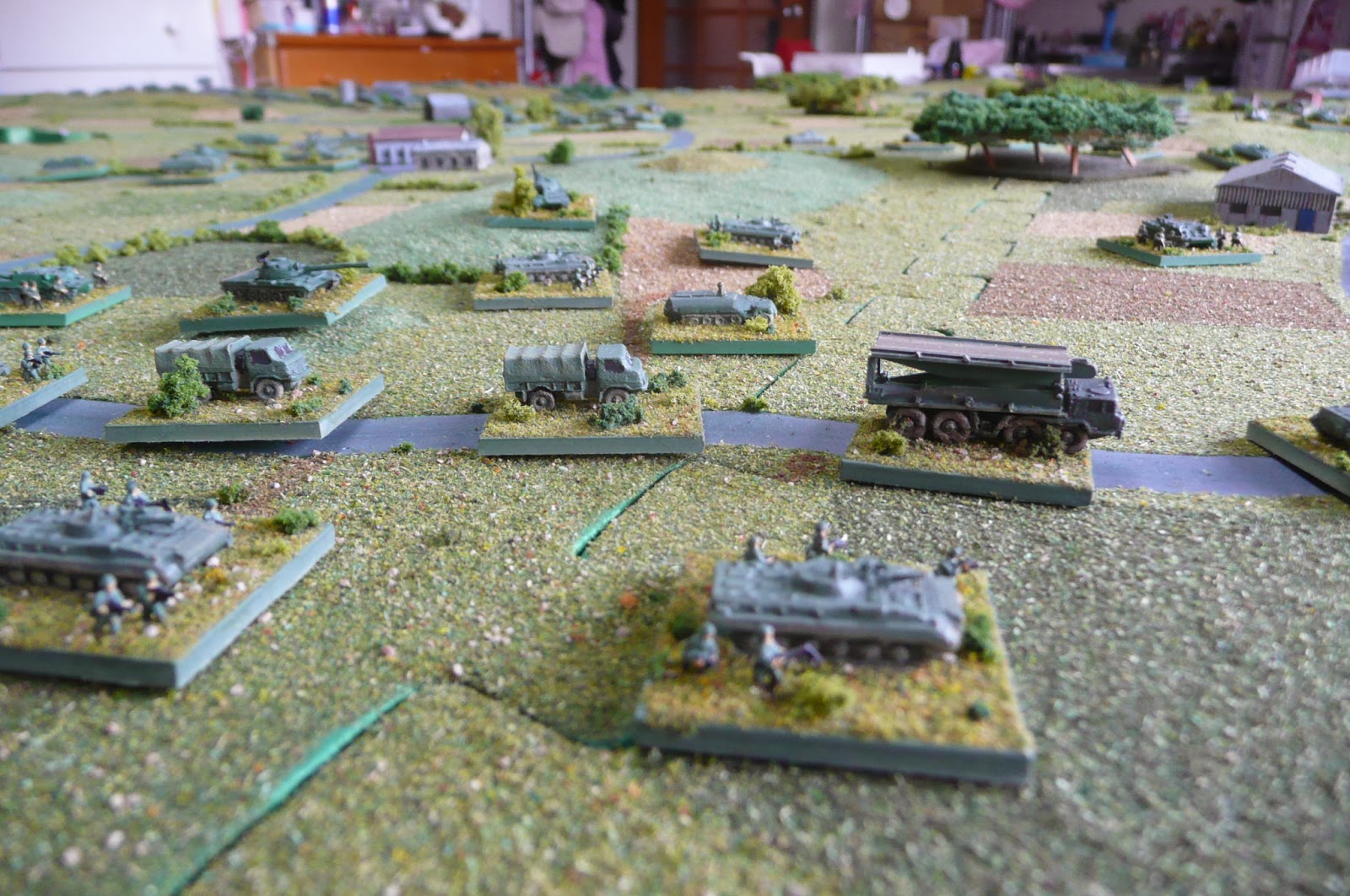 As tensions rose, the 2/64th American armored battalion arrived, and with this the Czech opportunity to take 1/30 in the southern flank vanished, to the great relief of the American commander. 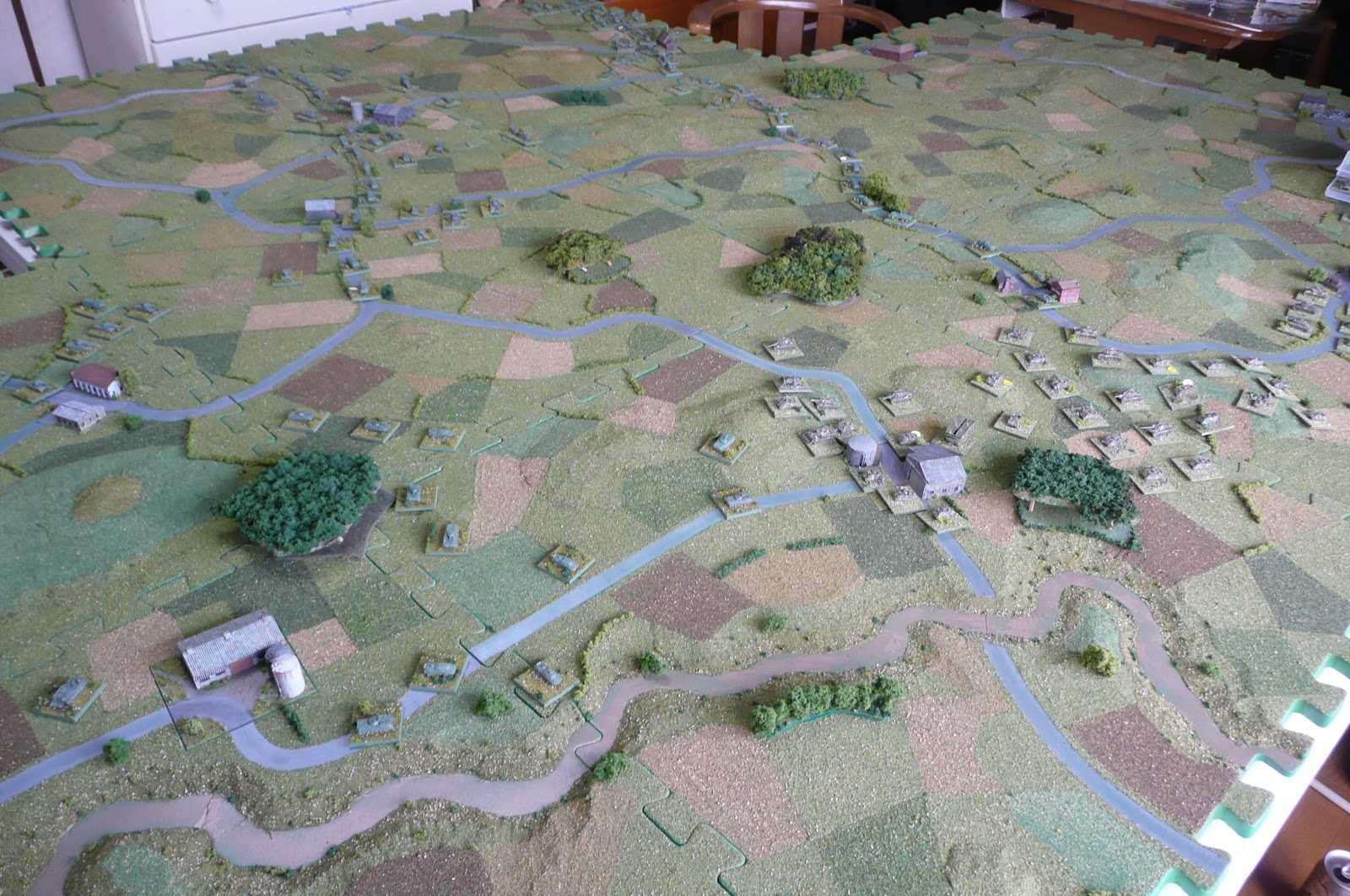 The day now settled into a series of patterns: Czech advances in the centre were stopped by the massed firepower of the M60A1s and the heavy artillery; Czech reinforcements struggled to get through the mud to aid their compatriots and, in the north, the Czechs continued their steady approach to the Main. 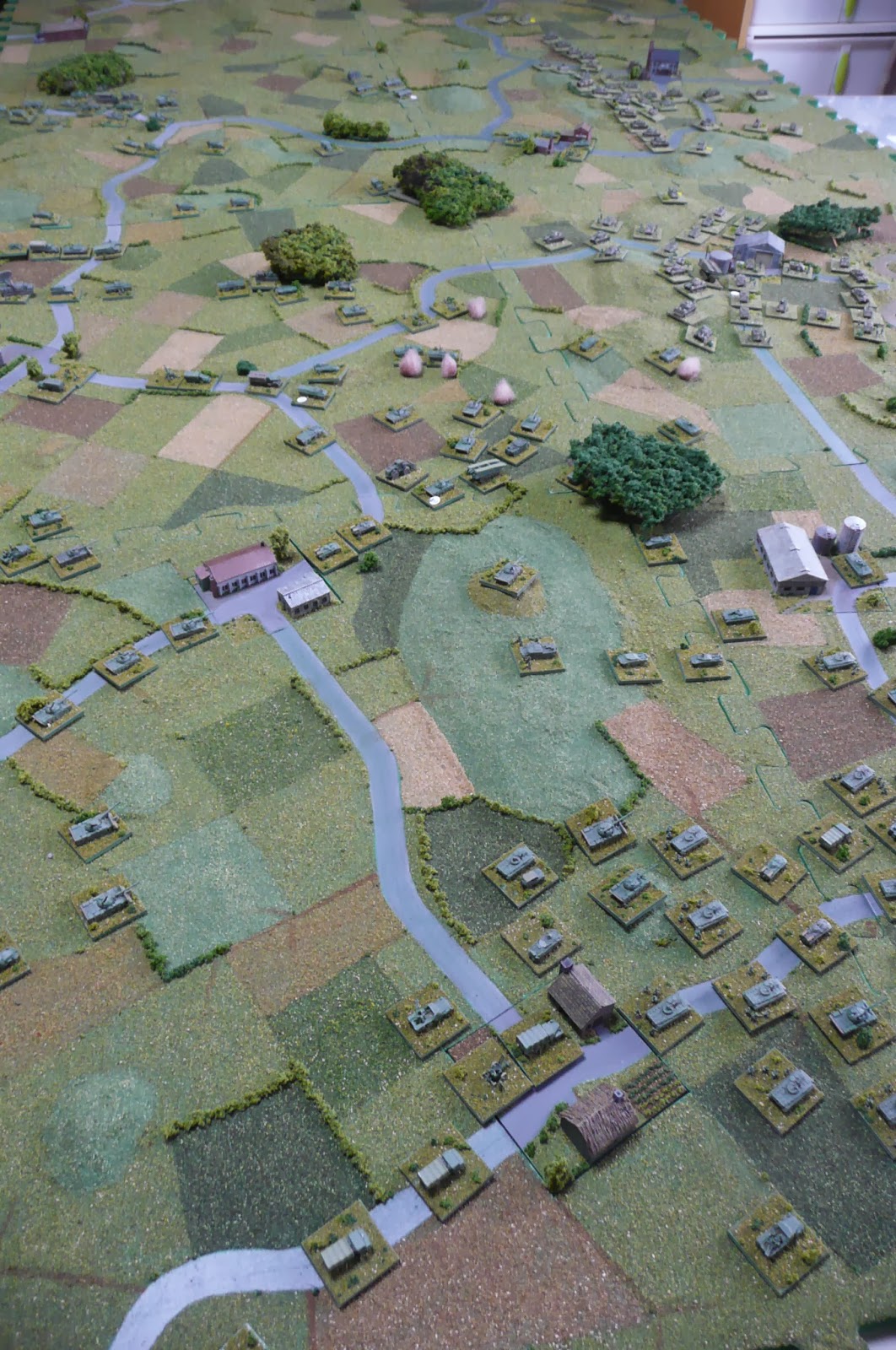 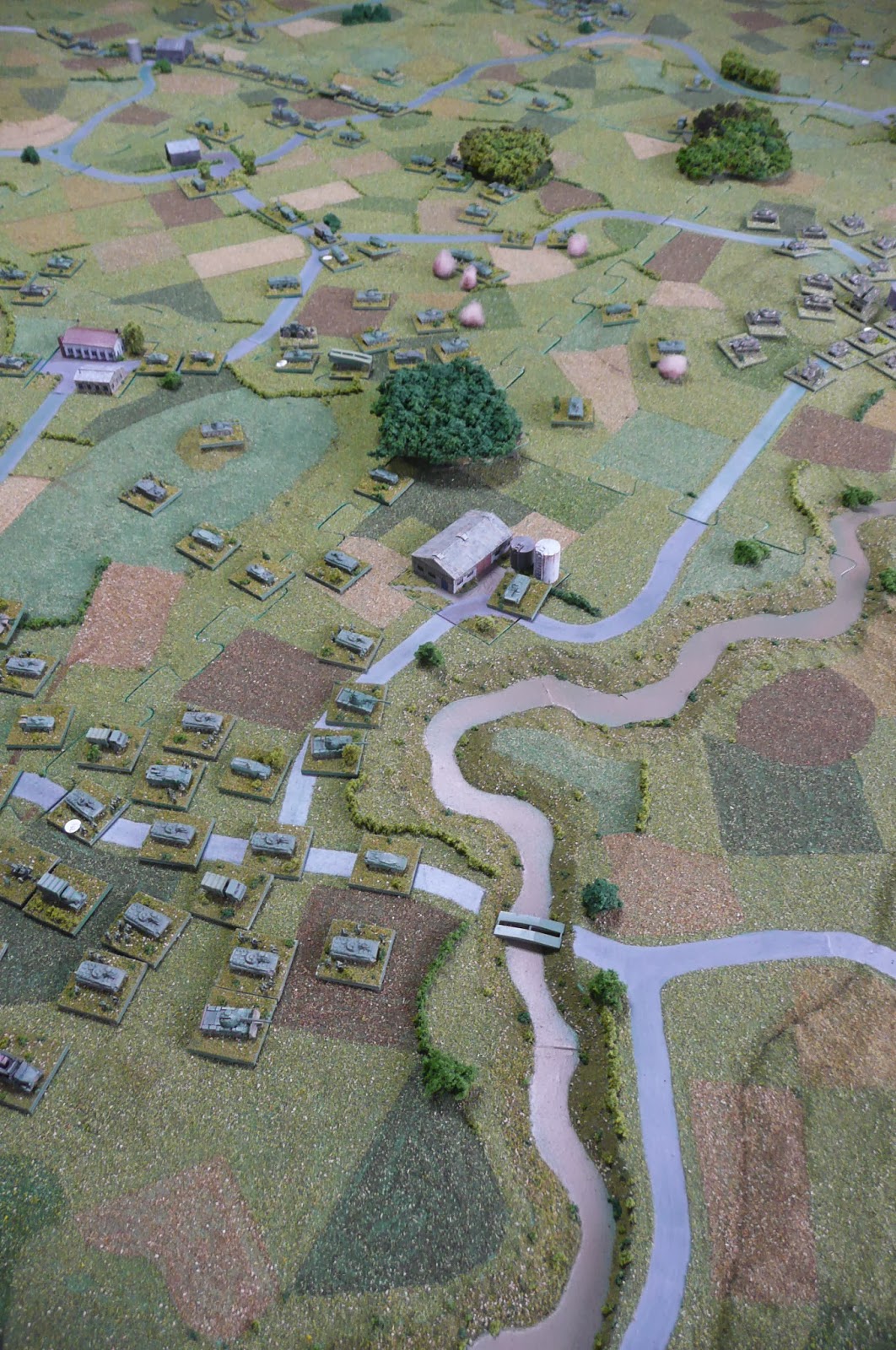 The Czech centre paid a heavy price for its attacks, but the river was bridged, and with air strikes impossible in the wet weather the advance units began crossing. 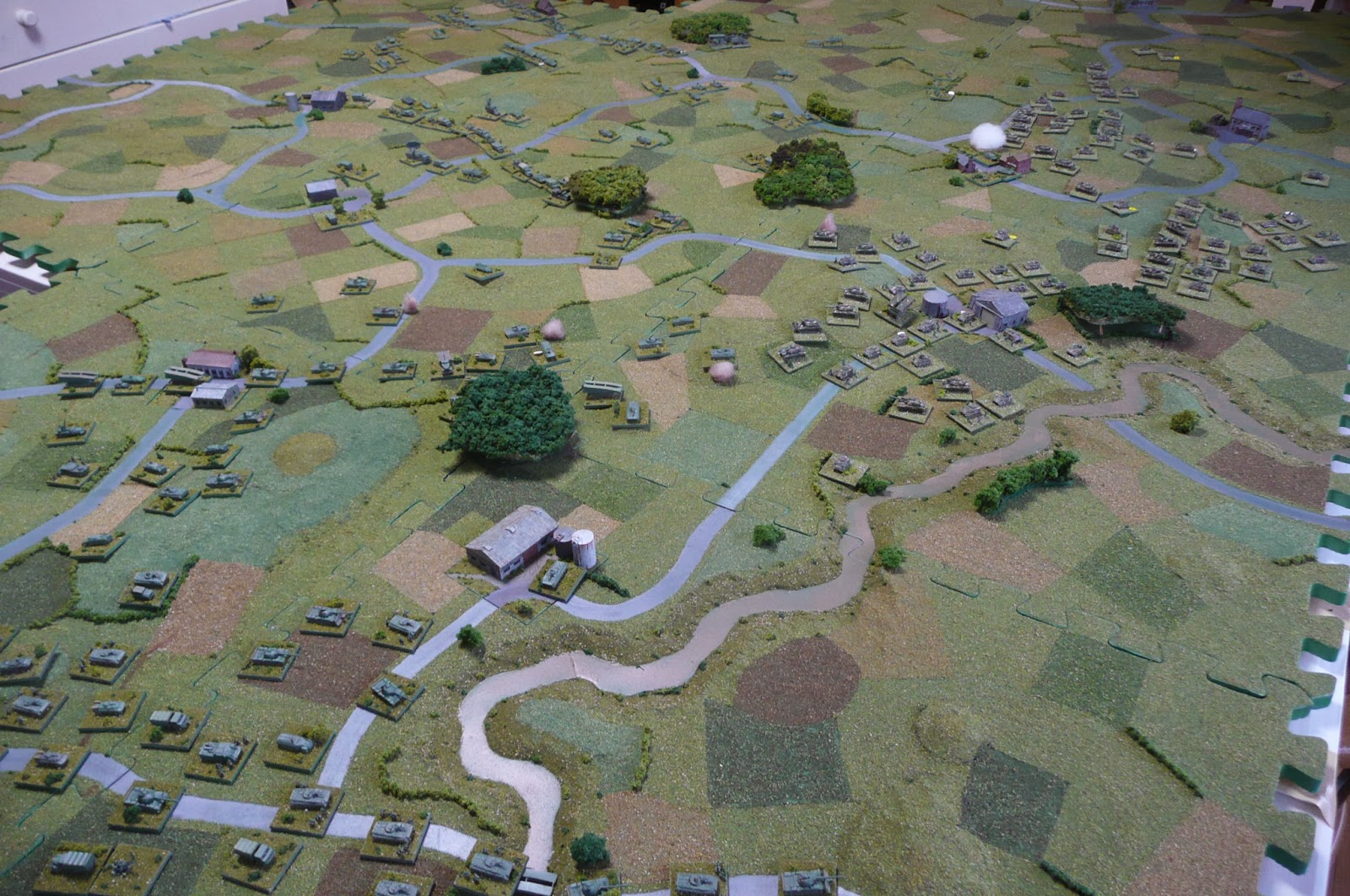 With time running out for the players, the action was called at 11:00 game time with the Czechs across the river but the Americans having routed the Czech centre and things very much in the balance. 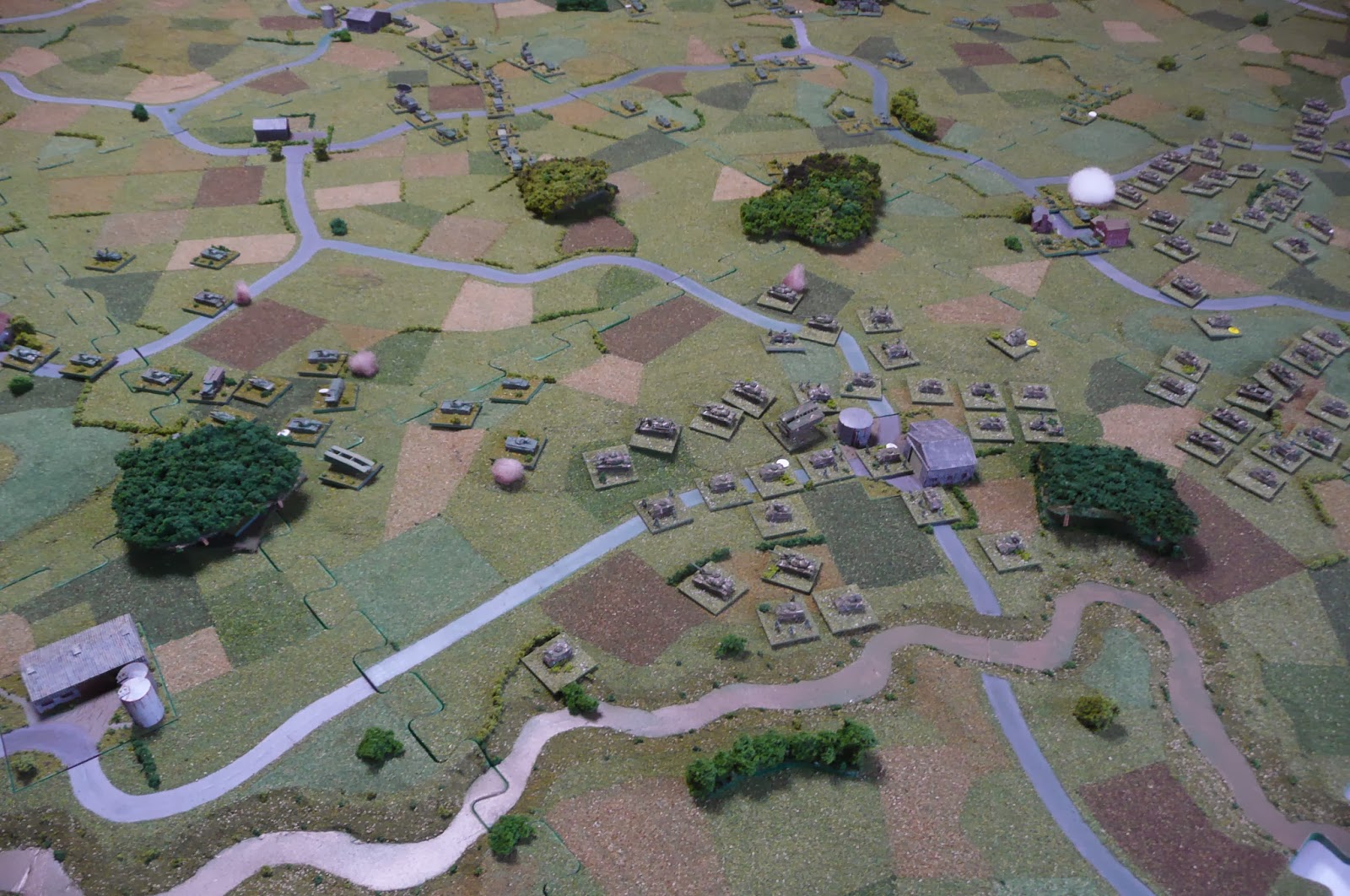 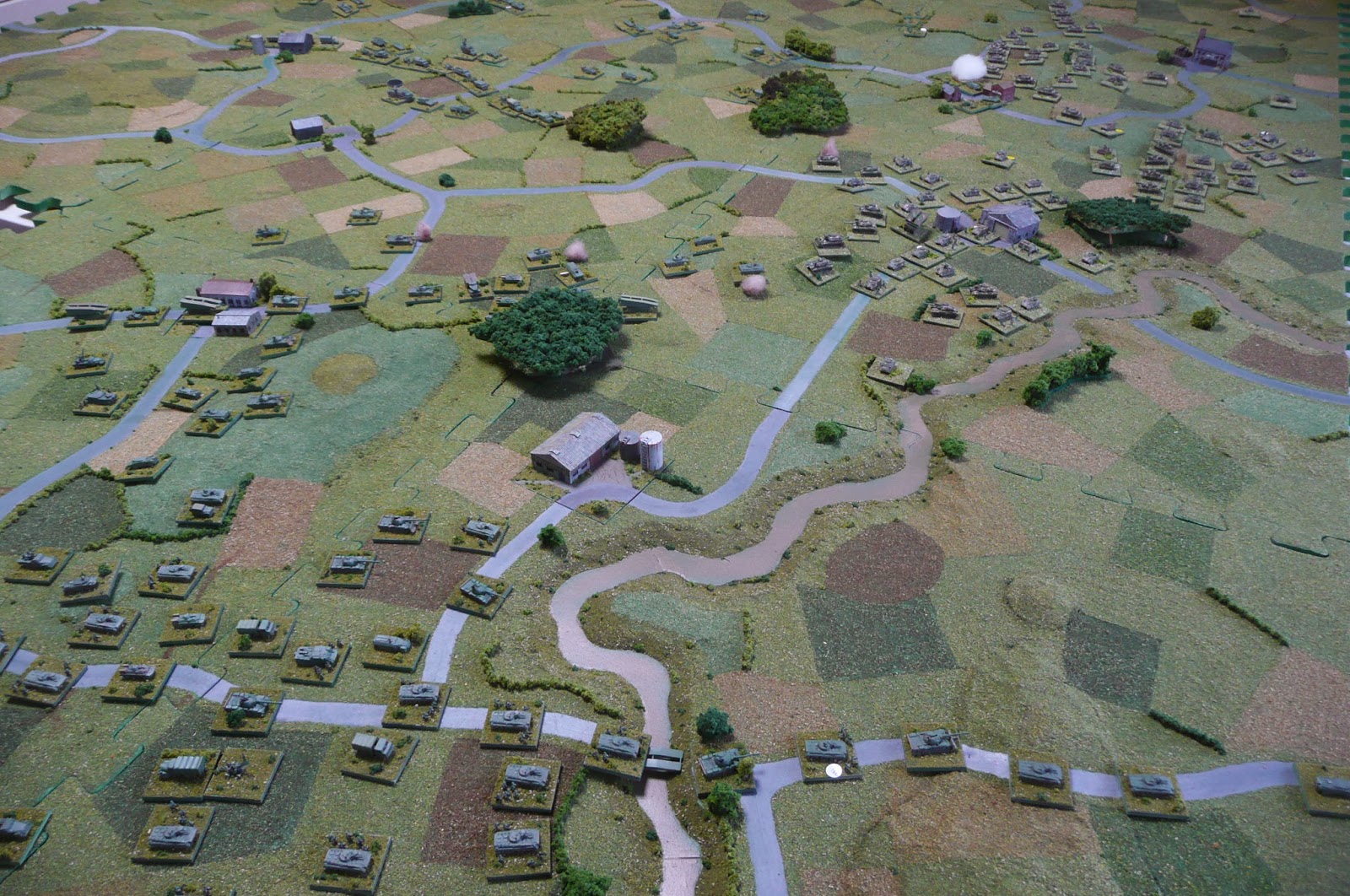 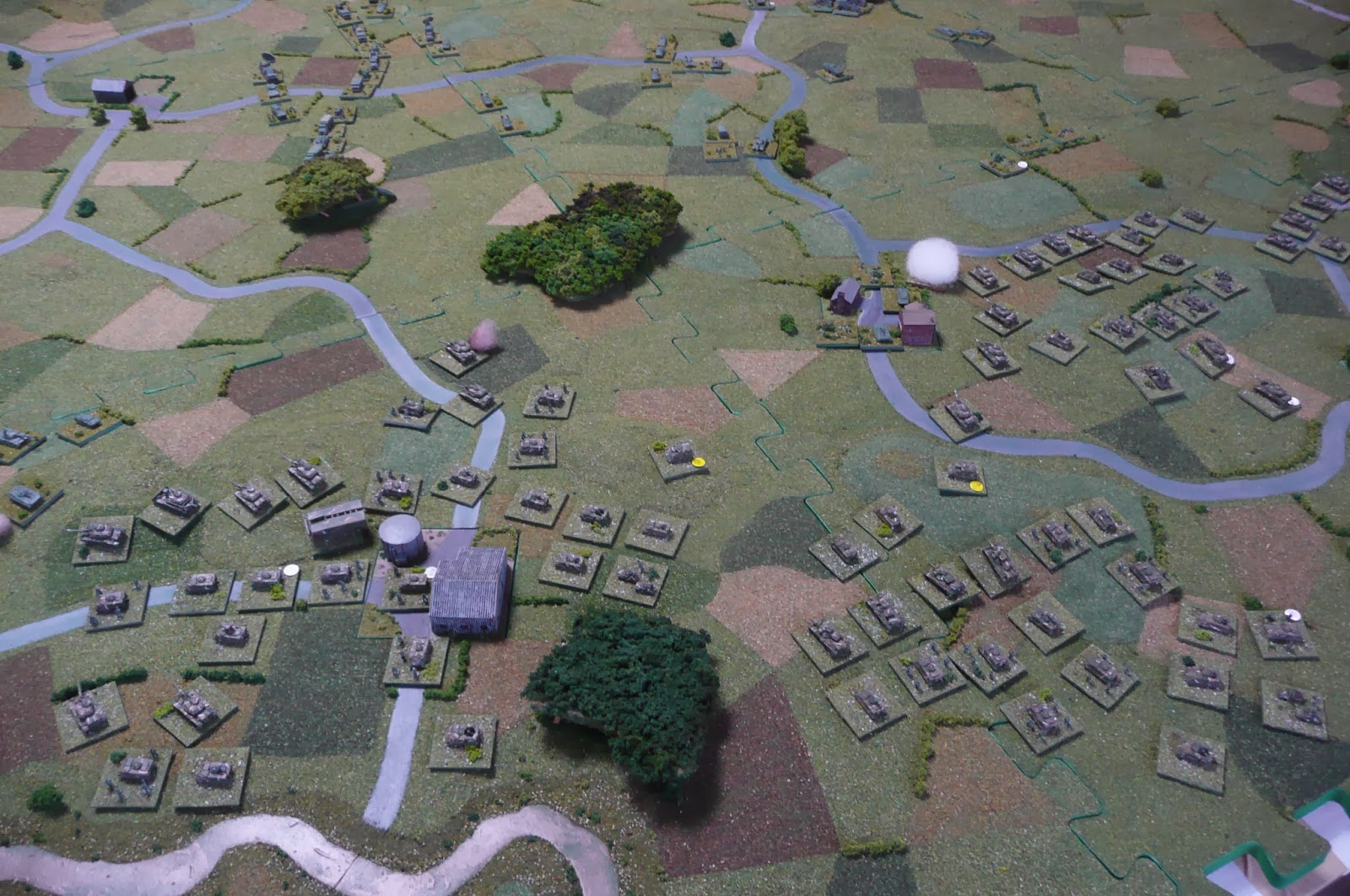 It was a fantastic day and a real treat to see so much happening on such a beautiful table.  Many thanks to my noble opponent Pat and to Luke (whose more in-depth reports can be found here and who put the game on and hosted us) for a great wargaming experience.

Last Sunday we managed to get six of us together for a game of Machiavelli, that Renaissance scion of Diplomacy.
﻿﻿

None of us had played before, but Pat explained the game well and we got into it after about 30 minutes of rules info.
The game was a lot of fun.  Most of us were a little cautious to start with and set about trying to consolidate our positions rather than look at any grand long-term strategy.  Funnily enough, the two most experienced gamers, Luke (as Naples) and Pat (as Turkey), got into strife with each other almost immediately.
The highlight of the game for me (as Florence) was seeing Luke pull off some clever naval play to put Pat on the back foot, which allowed me to take advantage of Pat's sudden weakness and Luke's goodwill to demand concessions from helping the one while simultaneously backstabbing the other!
Everyone started to find their feet as the game went on and although we all made some mistakes no one had a shocker.  It was a good day all round, with much humour on display.  We were forced to finish after three game years due to time constrants, but it was just getting to the point when attention spans were starting to give out, so it was a good time to pull up sticks anyway.
Next game is on Saturday up at Luke's, where he will umpire a Modern Spearhead battle for Pat and I.  I'm looking forward to it, though I may have to watch Luke suddenly screaming 'remember Naples!' and employing his umpire's prerogative in dastardly fashion!﻿
Posted by Prufrock at 11:00 PM 3 comments: