Heth roars down the pike and deploys to assault Buford and his cavalry. I Corps arrives on Buford's right to offer support. 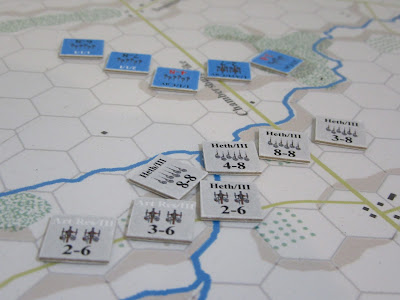 Heth moves to the left; Pender comes up on the right. The artillery commands the centre. The cavalry pull back to shorten the line and protect flanks while the rest of I Corps marches to the scene. 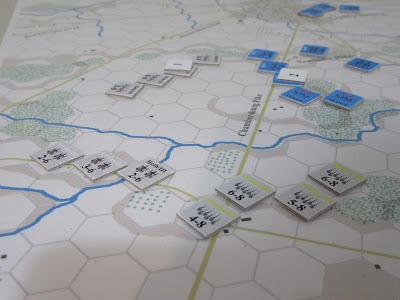 Pender assaults. Buford is quickly under immense pressure, but is unable to find the right time to pull back. 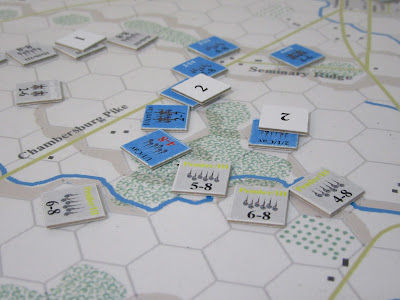 Heth continues to advance against I Corps. There are minor casualties on both sides. 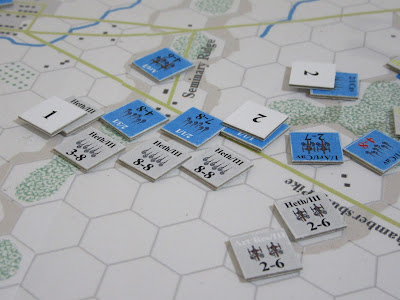 Casualties may be light, but the Union position is being squeezed like a ripe cucumber. 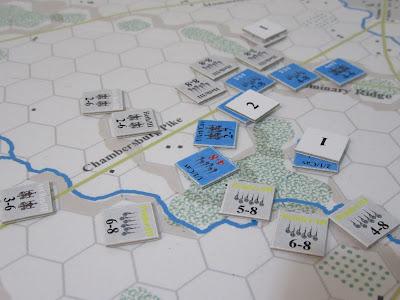 Reynolds commences bringing up troops in force. Heth loses two brigades in the fight. Does Buford take this chance to pull back, or does he hold?
He cannot safely pull back without exposing Reynold's flank, so he waits. 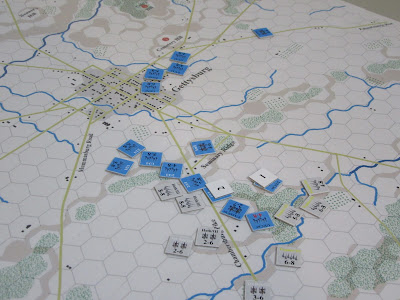 Rodes appears to heap more pressure on the Union line. 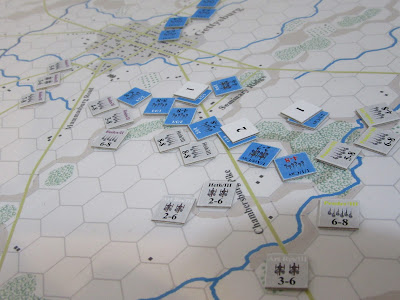 XI Corps marches into Gettysburg. I Corps is readying itself to retreat to Seminary Ridge. 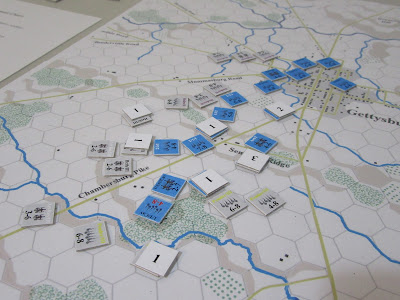 The scene in the vicinity of the town. Rodes' flank is exposed. He will shortly move back to less dangerous ground. 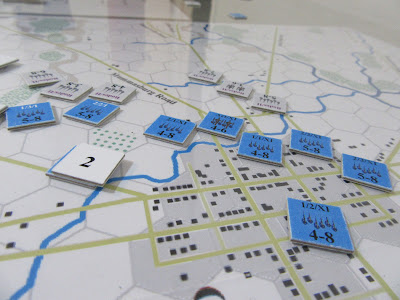 It is time for Buford to pull out... 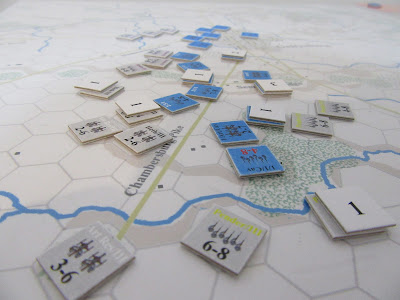 But he has left it too late. Waves of attack from Pender and Heth destroy his command. 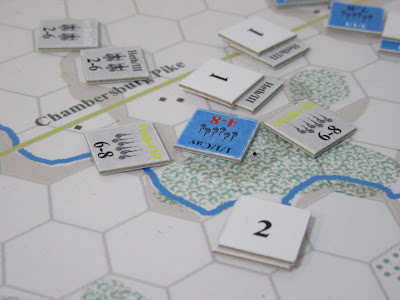 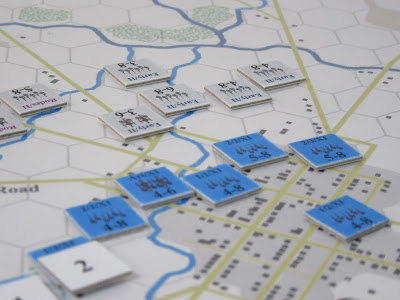 The Union position is imperilled. Rodes and Early have fixed XI Corps in position. Heth and Pender can choose where to strike on Seminary Ridge, while Early can move to outflank Howard's XI Corps if he wishes. 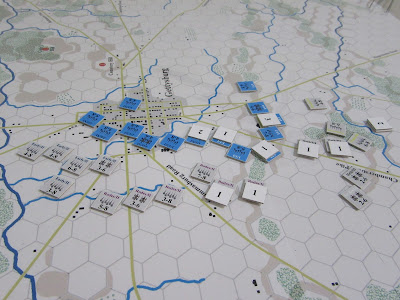 Heth and Pender attack the left of the Union line, with some success. Once again, the men wearing blue are being squeezed into a dangerously narrow area. 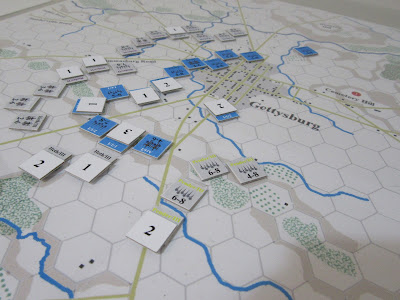 Early extends his line to threaten the right of Howard's position in Gettysburg. 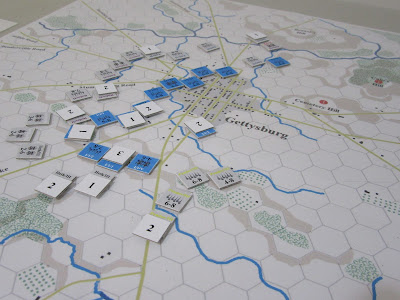 XII Corps marches onto the battlefield, up the Baltimore Pike towards Cemetery Hill. 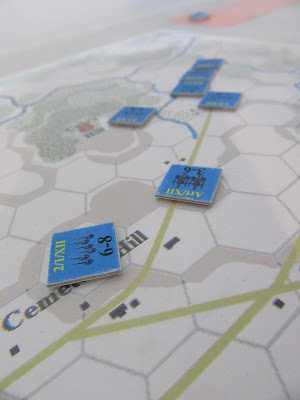 Heth crosses Seminary Ridge and drives in on Gettysburg itself. It is Union I Corps now in danger of being crushed. Casualties in this area are heavy. 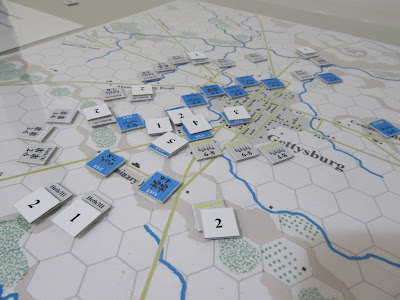 But the lesson of Buford's destruction has been learned, and Reynolds pulls his men back as soon as opportunity allows. It is now Heth who risks being outflanked. 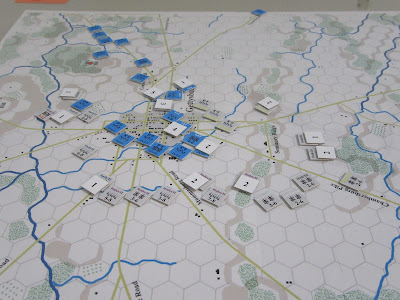 The situation in the town is precarious. A determined push from Early would see the troops there trapped in the town but his troops are exhausted. 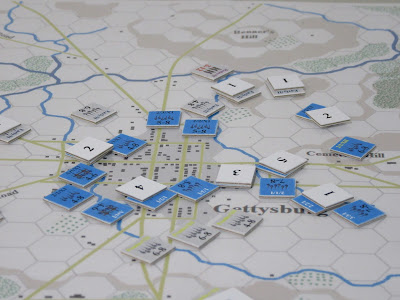 Anderson arrives too late to have any affect on the day's fighting. 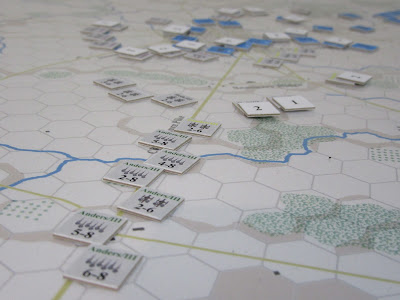 Night falls with Cemetery Hill and Culp's Hill safe for the Union, but only just. 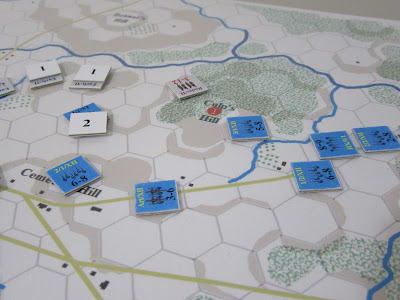 *****************
This playthrough for the first day turned out to be a draw, but the board tells us that if the battle were to continue again tomorrow with the troops in their current positions, the Union would be at risk of catastrophic defeat.  As it was, the Confederates took 5700 casualties (19 strength points lost), mostly from Heth's division, while the Union took 7800 casualties (26 strength points lost), mainly from Buford's cavalry and I Corps.
The game was a lively affair. The chit pull activation was by turns cruel and kind to both sides.
There was one lovely moment in Early's activation late in the day when, knowing he needed to attack, I looked at the Union line, thought I don't like the look of that, and found all kinds of ways to appear as if he was preparing for a charge in against them while ensuring one didn't actually happen...
It wasn't until later that the import of that sunk in!
So, a fun game of Battle for Gettysburg: the First Day. I'm glad I found my copy again, and am pleased I got to play it before getting the newly-arrived Battle Hymn to the table.