Invading Russia with NO RETREAT

I've had this game called 'No Retreat' from GMT sitting on the shelf for a while now. I've pulled it down and set it up a couple of times, but although the rules are supposed to be quite simple the game suffers from the 'nicely printed colour rulebook which came with the game contains so many mistakes that it's pretty much useless' syndrome.

This syndrome (common though it is!) still annoys me enough to take a while to get over it, but somewhere in the vicinity of three years later I've at last printed out the living rules and got cracking on it.

The campaign game starts off with Barbarossa and continues up until the fall of Berlin. There are shorter scenarios as well, but the idea is for people to be able to play through the Russian campaign in a sitting, using reasonably simple rules that encourage innovative game play.

The game is hex-and-counter, but has a small number of counters (by normal hex-and-counter standards), and is played on an attractive map with large hexes and good production values.

The rules are not too different from earlier classic board wargames except that this game uses cards to add in another layer of decision-making. The cards can be used as events (Soviets must make three attacks this turn; Germans can advance an extra hex after combat, etc...) or to do bonus actions (move by rail; force an enemy unit to attack; bring on a replacement unit, and so on). This means that there are a lot of options in play and many different tactics to try, depending on how you use your cards.

My game is of course solo - there are solitaire rules, but I'm not using them because I want to learn the two-player game - but I can see how this style of game would be a real winner if you were lucky enough to have a player of roughly equal skill and enthusiasm not too far down the road.

Despite it taking me a while to work into it, I think this will be a keeper. For the record, the Germans got off to a fast start and have taken Leningrad early. The Russians are up against it, but have a huge whack of reinforcements and replacements to bring on (when they have the cards) so it will be interesting to see whether they can take advantage of the stretched German line.

You know, with the GMT sale now on, I may even grab another game or two in this series. They have the North African Campaign and the Italian Campaign - both of which are of interest to a New Zealander!
Posted by Prufrock at 12:56 AM 12 comments:

As the rugby is on hold until the weekend I've started painting my set of SkyWave 1/700 buildings. They are lovely little things, and I've been a bit worried that I'd stuff them up. I did glue one of the wall sections upside down, so hopefully that will be the only thing I do wrong!

So far all I've done is undercoat them, give them a watery coat of something brown or off-white for the exterior walls, and followed that with a sort of generic red for the roof tiles.

Next step will be windows, doors and probably a wash. 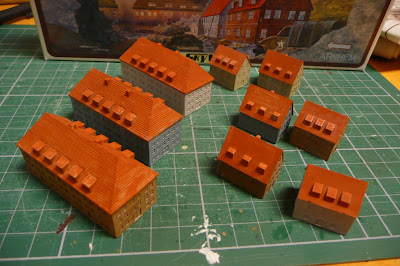 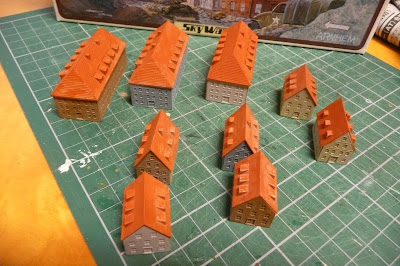 I think they'll look great on 1/300 battlefields. I'm not quite sure how to base them though. Another first world problem...

The best rugby team in the world and the French

Well, it's quarterfinals time in the Rugby World Cup and, as a New Zealander, I'm nervous as all billy-o. The New Zealand team, the All Blacks, are comfortably the best rugby team in the world. They sit on top of the rankings, they have the best win/loss record in the game, and like the Australians in cricket, are the team that every other team measures themselves against.

The All Blacks are famously tough, they never give up, and they marry strong forward play with exciting backs and a desire to play an attacking style. Only a handful of other rugby-playing nations has ever beaten them. Three of the other quarter finalists (Ireland, Scotland, Argentina) have never beaten an All Black side, and the Welsh have not won against the All Blacks since 1953.

And then there are the French.


We play them in Cardiff. They are our most feared World Cup opponents, have won two brilliant victories to knock out All Black teams in 1999 and 2007, and almost rallied to beat us in the 2011 final.

The first rugby names I remember from my childhood are French. Lescarboura , Sella, Blanco, Condom. They were formidable then and their players are formidable now.

On paper we should waltz in, but rugby is not played on paper. The French bring a particular mix of apparent insouciance, actual brilliance and a lack of concern for personal safety that can unsettle the All Blacks. Every so often they seem to be able to find something that we can't account for.

It's a wonderful game, a wonderful match up, and the uncertainty is killing me! I can't wait for it to begin.

To give you some idea of what the French can do, here is the try from the ends of the earth.

But first there is Wales against South Africa...

Good luck to all the teams, and may the best win!