My miniatures gaming buddy made his long-awaited re-appearance in Wakayama for a day of DBA and Field of Glory. DBA went down a treat, so the planned Field of Glory affair got given the boot in favour of Big Battle DBA. What follows is a short report of our first BBDBA match.

The armies were composed of the following elements, with each army being divided into three divisions:

The Pyrrhic army was organised into a left of 13 elements, a centre of 16 and a right of 7. The Antigonids were organised exactly the same, but in reverse. The stronger flanks were to contest the gentle hill between them, while the weaker flanks would fight delaying actions around a wood.

This is a shot of the deployment. All photographs are from the Antigonid right flank. Note the gentle hill in the foreground, which would be the scene of much carnage during the day. 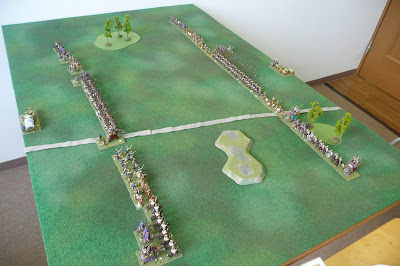 Both sides advanced on the hill, with Pyrrhus' troops arriving first. The Antigonids withheld their left and angled their centre as well, in an attempt to open up a gap between the enemy centre and its left. 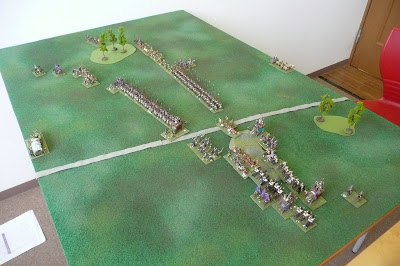 Battle was joined early on the crest of the hill, but with pip dice like these there could be little fancy business in the centre. It can be seen here that both generals were positioned on the furthermost flanks of their phalanxes: Antigonas in the front line; Pyrrhus behind a troop of spearmen. 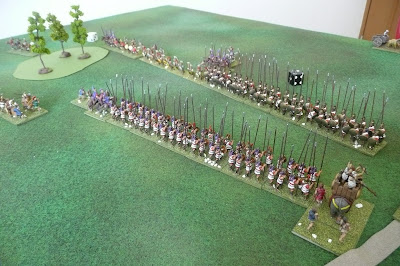 On the hill the battle swung to and fro. The Antigonid warband and auxilia made some early inroads, killing an elephant and punching a hole in the line. In response the Pyrrhic knight general, ably supported by cavalry, threw back the enemy horse and visited great slaughter upon them. 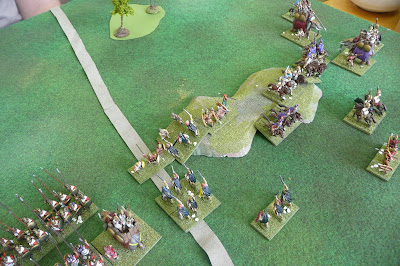 On the other flank, both sides were anxious to avoid exposing themselves to danger. A carefully refused flank and poor pip dice (the one shown here being fairly representative) negated the threat posed by the light horse. 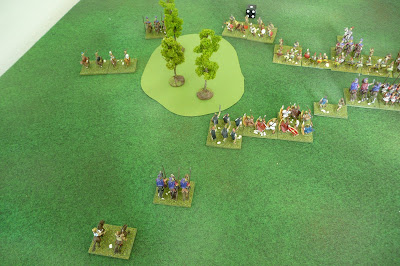 Meanwhile, on the hill, a decisive blow was being struck. With the Pyrrhic knight general riding down warband as if they were pheasants, and with both commands only one element away from breaking, the Antigonid knight general charged impulsively up the hill into the enemy cavalry, looking for glory. Unfortunately for him, he there met a sticky end.
The following shot shows the ill-fated charge of the Antigonid (heading up slope in the purple cloaks) : 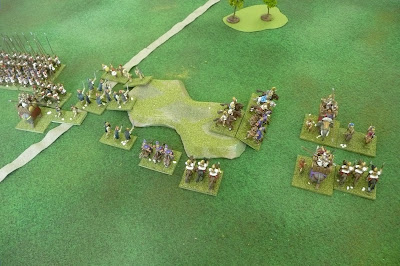 When news of the fate of his right reached Antigonas, he sought victory or else a soldier's death. His phalanx obliged by punching a hole in the enemy line, into the flank of which Pyrrhus launched himself. The picture below shows the two giants meeting face to face on the battlefield... 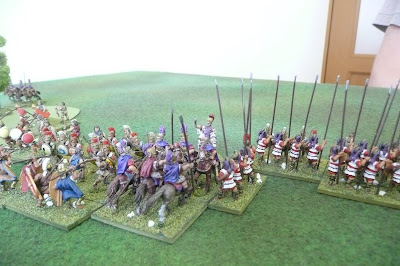 ... but it was not Pyrrhus' day. He fell, and with him went his army's chance of victory.
Thoughts:
It was a great little battle. There were moments of triumph and moments of disaster for both sides, and in the end it was fitting that things should be decided by single combat between the opposing commanders. The terrain dictated tactics in this battle, with both sides fighting over the hill and avoiding the wood.
There were a number of 'dice moments' that turned the game on its head, with miraculous victories against the odds almost the norm for the Antigonids. The Pyrrhic forces were more ably led on the whole, but luck was not quite with them.
Posted by Prufrock at 10:48 PM