Plans to play Triumph have not yet come to fruition, but in an effort to get a game or two in I decided to try the card, dice and sticks game Table Battles by Tom Russell, using figures in place of sticks to give a better sense of the battle.

Pharsalus seemed the obvious choice: I have the figures ready to hand and it is a battle I know well and always enjoy.

Pompey (pink and red cards) comes out of the blocks hard. Caesar (blue and light blue cards) is not able to get his fourth line into action and Pompey bursts through Antony to claim the victory. 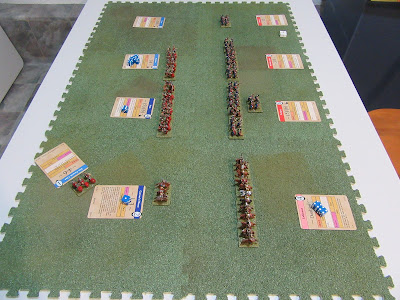 Pompey takes the initiative and never gives it up. Antony and the Cilicians mutually self destruct before Metellus Scipio wins in the centre. 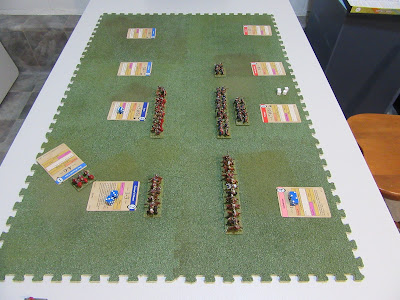 Some Story. Scipio breaks through in the centre. Battle over. By now I was starting to wonder if Caesar would ever win this. 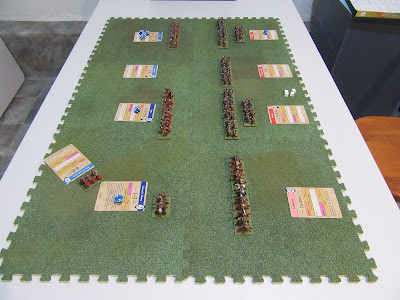 Pompey gets a little cocky: Labienus over-commits on attack and cleans up Caesar's cavalry, bringing the fourth line into play. Big mistake. It's close - Antony is almost knocked over again by the Cilicians - but it's a first win for Caesar. 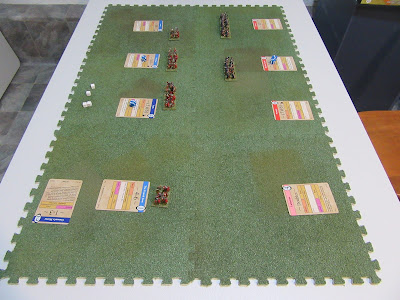 A vicious fight. The fourth line is involved again but it's the infantry cleaning out the entire Pompeian line that wins it for Caesar. 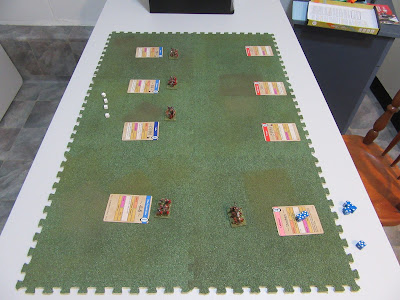 Pompey is back to winning ways. Caesar brings up the fourth line a touch too soon, which gives Pompey the opportunity to cease initiative, maintain pressure and defeat Caesar's command. 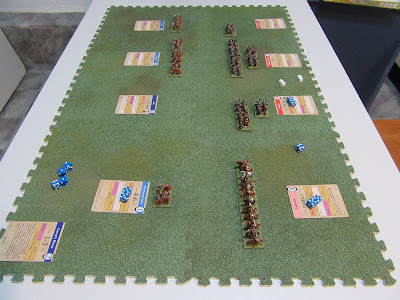 In the least satisfying game so far Caesar wins again, this time because Pompey has no enemy left that he can legally attack. The troops left on the board (remember, Pompey is the red and pink cards) show what a travesty this result is! 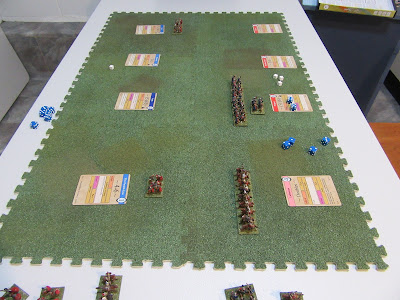 So there we are. Seven games of Pharsalus, four to Pompey and three to Caesar. It's certainly possible to win with both sides once you get the flow of the battle, but if Pompey just concentrates on attacking with his infantry and screening (rather than attacking) with his cavalry (and gets the dice to allow this strategy), he stands a pretty good show of winning. Each Caesarian infantry command is worth two victory points, and running over one will win Pompey the game if Caesar hasn't been able to claim a point himself already.

Not all Table Battle scenarios are equal, and I got put off the game a bit after engaging with a disappointing Granicus scenario from the Alexander expansion which plays nothing like the historical battle and (as far as I can see) is almost unlosable for the Persians if they follow a particular strategy. The figures here though helped with the visuals and atmosphere and the scenario was interesting enough to make me want to keep playing. In so doing I found myself coming round to liking the game again.

All games were played solo, each taking about five to ten minutes from start to finish. It turned out to be an enjoyable way to spend a lazy rainy Saturday afternoon.