Luke has sent me his comments on the game, so here they are.


I knew Aaron wouldn't be able to bring a 4th battalion to the table unless he took a B option, with its attendant victory point penalties, I expected him not to take that gamble, and thus be left with 3 battalions. As it turned out he took a B option, but one that didn't involve a 4th battalion, so that part of my pre-battle prognostications was sort of right; what I really didn't expect was that he would start with only 2 of them on the board, and flank march one - it was a good move IMO.

My plans were as follows: 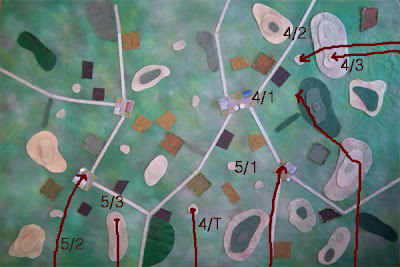 Experience has taught me that trying to advance on all 5 objectives is a wasteful dilution of forces. Since my right contained a higher proportion of objectives, that is where I would concentrate my forces. My OT battalions were rated cheap in terms of points, and rated Green to boot, so they would take on their task in a circumspect manner: one approaching through the woods to the right of the farthest town, and the other two flank marching towards it (I figured one of them ought to show up in reasonable time). A BMP battalion would approach frontally to engage the enemy's attention.

A BMP battalion would try and hold my left, and the other BMP battalion plus the consolidated tank battalion would be held in reserve. The weakness of this plan was the only NATO1 opponents I had played before were way back at the NZ NatCon in Easter 2008, and I'd forgotten how hard it was to make any order changes in the face of their radio jamming. Hence I really needed to have put in timed orders to continue the advance on my right to go right into the actual objective (and beyond)from about turn 6; as it was, I was stalled badly on my right due to lack of effective orders once the flank marching unit arrived (the other one never got the 6 it required to arrive).

The strength of the deployment was that the reserves were of an appropriate strength - not too strong to drain my attack of assets too badly, while being strong enough to make a decent influence when committed. In hindsight, I'd have been better off keeping one (or both) of the OT flank marching units on-table and marching it right along the flank, since if you measure out the distance to their point of arrival, it would take less time to get their on-table than their expected 6 or so turns to randomly arrive. That's what you get for plaing cheap-arsed WarPac2 forces!

I had 9 actual battalions in the game; two were parcelled out to other battalions to make 7 in-game battalions (the ones parcelled out were the divisional recon battalion and the 5th Regiment's tank battalion). Each regiment had a battalion of towed 122s in support, plus a battery of MRLs. 3 of these 4 were completely taken out my Aaron's M107s: 1 shot per target. I also had a battalion of M46s for counterbattery work, but these were also taken out in one shot by the M107s. The divisional AA Regiment (all towed at this date, 1980) provided more elements. It's a lot of gear, but the quality is poor.

Aaron's flank march really surprised me. He also didn't do much in the way of cross-attaching, so his armoured thrust didn't leave much in the way of vulnerable targets for my regimental artillery to hit. As a consequence my MRLs on this half of their able did what they've never done before, and fired smoke for their single volley before being wiped out by Aaron's divisional-level M107s. It bought me a turn of extra delay before collapsing on my left, it was worth it.

At the and of the game I was technically one point ahead. But the morale victory goes to Aaron. I was contesting one of his objectives with a battalion that was going to be eliminated over the next few bounds if we had played on until exhaustion, which would have bagged him 3 more victory points. He would then have been left with two slightly damaged armour battalions, and me with 3 mostly undamaged but green infantry battalions lacking anti-tank weapons save their RPGs. So he wouldn't have been able to shift me from my objectives, and I couldn't have left them to contest his, leaving him 2 points up.

It was good fun - but we must learn how to process the turns more quickly. Most people seem to get at least a couple of turns in per hour, while we averaged over an hour and a half per turn :-(
Posted by Prufrock at 12:57 PM