I pulled out the 15mm figures last night for a refight of the battle of Ipsus pitting Antigonus and his son Demetrius against Seleucus, Antiochus and friends in Phrygia.  As for who is who, you can tell the Seleucids by their large number of elephants and their scythed chariots.

The battle began with skirmishing from both sides as they attempted to drive off the enemy light troops and get in some shots against elephants, heavy chariots or cavalry. 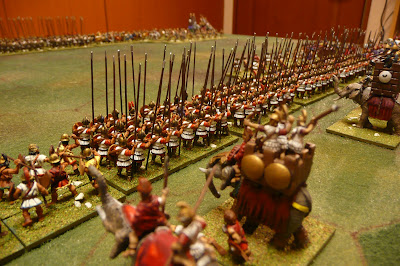 Both sides jockeyed for position for a number of turns, but it was the Seleucids who made the first big move with a line command. 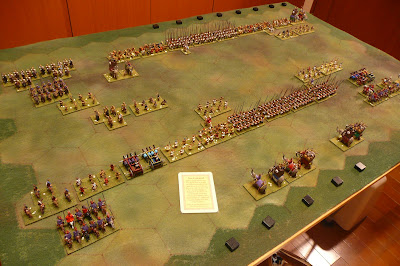 This was followed by prolonged skirmishing.  Order lights, darken the sky, co-ordinated attacks and outflanked being cards of choice.  Both sides took minor casualties, but the lines were unbroken.


Tension rises as Antigonus plays a line command to close the gap between the opposed phalanxes.  There is still, however, very little in the way of movement from the cavalry or elephants. 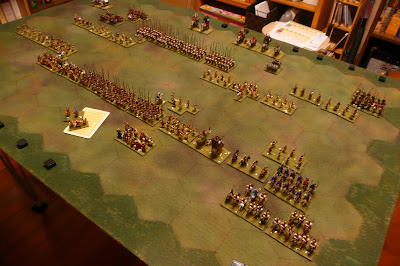 After another couple of turns of shooting Antigonus orders the advance, and his men slam into Seleucus himself.  Two hits are scored in close combat but Seleucus falls from his horse and is killed in the melee.  Antigonus goes two banners up.

Antigonus beseeches the aid of fortune and advances the phalanx with a little help from a double time card.

Antigonus stretches his advantage to five banners while the Seleucids still have none.  The counterattack is desperate, but it is only a local response.

The only elephant unit not hampered by skirmishers in its way charges in.... 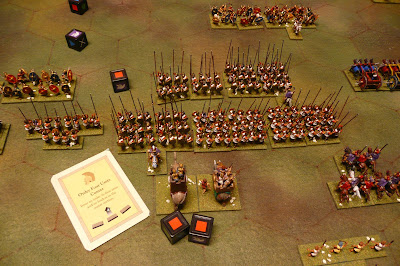 ...and is destroyed!  The heavy infantry, however, finish what the elephants started and score a banner for the cause. 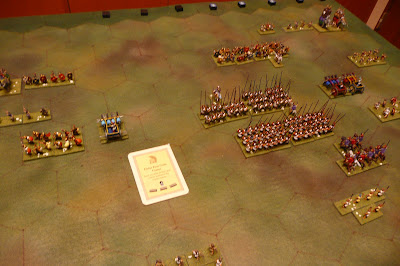 The scythed chariots drive off the enemy but cannot kill them and are left in an exposed position themselves.  Five banners to one is the score.

Over the next two turns a series of desperate attacks by the Seleucids are met calmly by Antigonus' men.  The Seleucid phalanx succeeds in beating off the Antigonids, but they are unable to bring their elephants to bear.

With the banner totals at six to three the peltasts - led by Pyrrhus and Antigonus - and the elephants charge in against the depleted Seleucid right. 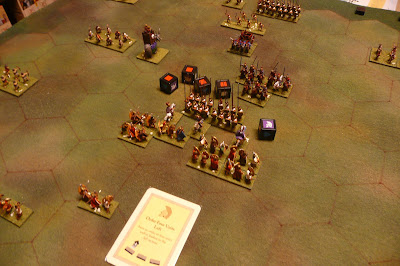 The last unit of phalangites is destroyed in the charge, Lysimachus dies in the rout, and Antigonus has defied history to emerge victorious, eight banners to three, having made virtually all of the decisive attacks himself.  It is a brilliant performance from the octogenarian.

*Elsewhere, the youthful Antiochus and Demetrius still remain in pretty much the same spots that they started.  Perhaps if the historical Demetrius had sat on his hands instead of pursuing the Seleucid left off the field the real result might also have been different...