I set up the card-driven ECW game Unhappy King Charles the other night for a play through to refresh my memory of the rules and try out the new coloured chits I'd got for the particular purpose of using with it.

UKC is an interesting game: the focus is more on building areas of influence than on battles - these being costly and risky - so progress is incremental rather than dramatic. It's not ideal for solo play unless you're a real ECW buff (which I'm not - my interest is casual) but I was enjoying it nonetheless.

In the early war the biggest drama was in the South and the Midlands. Waller dumped the Royalists out of Cornwall while Rupert a bit further north took Nottingham by siege.

There was more to-ing and fro-ing, with Essex besieging Reading which brought Rupert haring down to sort things out. Rupert's efforts were spectacular, and by early 1843 (ahem, 1643 - Editor Ray) Essex and Manchester had been ousted, had had their armies dispersed, and had left Rupert in position to beseige London, with no one around able to do very much about it.

Slightly agog at the pace of this action, a light suddenly went on in the dimness. A quick check of the rules showed that I'd stuffed up: Rupert was not allowed to command an army of quite this size just yet. Ouch.


I may have got the hang of something, but it certainly wasn't the rules! Too far gone for a re-do, I've called it game over. Next time I'll have to abide by the rules more civilly...

We had our version of the Society of Ancients' battle day here in Japan today. The object of this year's study was of Pharsalus, and we used bespoke rules to try to explore the battle and some of the possible outcomes.

With six players and myself as umpire, it was an excellent turnout, and everyone got into the spirit of the event. The rules were simple: play a card (move, charge, hold, skirmish, fall back, etc) and act. Combat was by dice roll, with units needing different scores to hit against different opponents. Players had Tribune pieces which they could play to save hits or to add dice to an attack, and there was an appeal to fate option by which players could ask for a re-roll by screaming their side's watchword, with the re-roll option then passing to the other team and remaining with them until someone on their team had used it.

Each player had his own secret victory conditions, and was able to score 'dignitas' by hitting the enemy, surviving past a certain period, using his tribune effectively, and so on. The intention was to keep players interested and to give them an incentive to command their section in a historical fashion.

For me, the game was a great success, and it was wonderful to see people getting caught up in the moment and to watch the battle re-enacted in the way it was.

I'm not going to say too much as I intend to put the bulk of my reflections into an article for Slingshot, but here are a few shots of the deployment and some of the action. 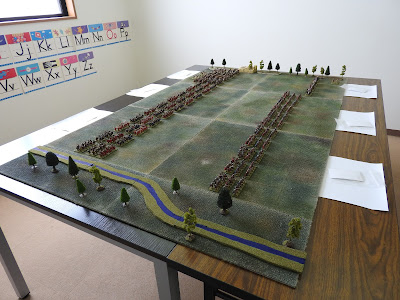 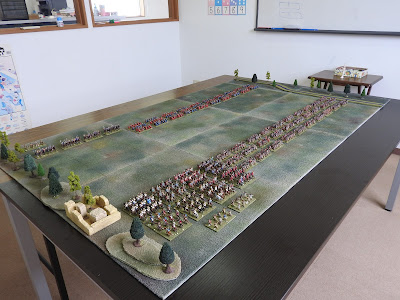 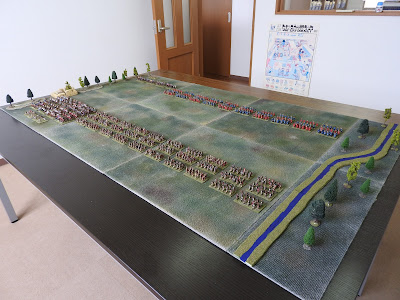 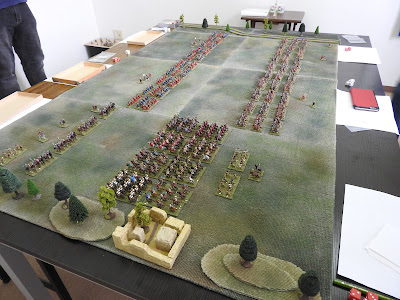 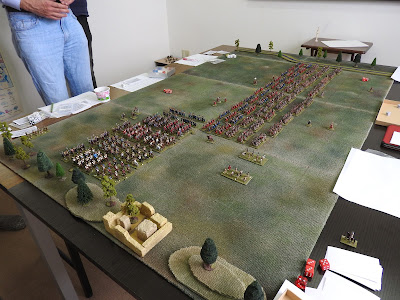 Many thanks to all who participated in making this a great day.
Posted by Prufrock at 7:09 PM 21 comments: