A Comprehensive List of Things to do While in Isolation.

Recent developments would seem to indicate that we wargamers are likely to be spending even more time in our rooms than we generally do. Sadly, as much as we would like to, we can't spend all that time painting, gaming, and reading up on armies and battles old and new. It would get boring.

Here then is a Comprehensive List of suggested other things a wargamer can do to while away the hours of isolation when between games, paint jobs, or books.

Learn an instrument. Were you bullied at school because your parents thought it would be splendid for you to play the concertina? Now is your chance to knock that trauma for six. You can even do it with help from the internet. As the Wiki How website says:

"While how easy the concertina is to learn depends on the type you use, you can be playing some folk tunes in no time!"

That's right - folk tunes in no time! What's stopping you? Not Buttley of the 4th anymore, that's for sure! This is the moment to demonstrate exactly how little effect his taunts still have on you several decades later.

Make a video. Continuing the musical theme, why not follow the heartwarming example of relatively minor celebrities medleying 'Imagine' while pretending to be in isolation? Combining with wargame buddies to make a similarly heartwarming cover of a similarly totemic composition, such as 'Number of the Beast' or 'Ace of Spades', would be a glorious opportunity to raise profiles while also seeming like fun and empathetic people.

What could be a better way to show that we're all in this together than hum-howling the opening riff of, say, 'Smoke on the Water' and then turning it over to a mate to hum-howl the next four bars, another the next, and so on? And all this before even getting to the vocals or the guitar and organ leads, which would obviously be the highlights of the song.

Get blind rotten drunk. If people say that this is unbecoming for a middle-aged-guy-who-is-indisputably-carrying-a-few pounds-too-many demographic, stuff them. It may not be a good look to get rolling drunk and dribble on yourself, but who's going to see you (provided you do your drinking and your video-making on separate days, of course)?

It could be great way to let down a remaining hair or two, and as a bonus it has the potential to lead to a need to stay in bed for a day or so afterwards - the odd bolt to the bathroom notwithstanding - thus bringing the end of isolation closer.

Leave commentary on online news articles. When you find a news article online written from a perspective that you disagree with, let the author know about it by leaving a comment. The author may well take heed of your thoughts and publish an updated form of the article which addresses your concerns, removes any hint of partisan bias, and renews faith in the unrelenting efficacy of  logic.

Be witty on social media. It's not only on news sites that you can put your keen powers of observation to good use: social media also provides boundless opportunities to contribute good sense and good-natured banter.

Good situations to drop in on might include your teenage niece's conversations with her friends (she will appreciate your sense of humour, and her friends probably will too), your self-made school friend's house and land renovation picture diary (he will love your jokes about how far he's come), and your partner's friend's travel pictures (she will be glad to be reminded that she won't be able to do any more of that sort of thing for a while, and most especially if you can include a pun or two).

Make some new friends. Judging by advertisements on the internet, there is a surprisingly large number of lonely women from exotic countries in my area who would love to get to know people in the vicinity, and I daresay it is the same for other male bloggers. For our female wargamers, I gather there is an abundance of somewhat older gentlemen with a lot of money and very busy lives who would be eager to make their acquaintance with a view to cultivating long-term friendship.

Now that we have some time on our hands it might be a good chance to chat with these people, get to know them a bit, and invite them along to a family barbecue once all this is over.

Video call fellow wargamers. This could be just the moment to get to know other wargamers who - to this point - you know only from reading blogs. You can share awkward periods of silence matched only in awkwardness by periods of simultaneous talk; you can experience lagging internet connections in real time; participate in bouts of sneezing; explore mysteries of idiom, dialect, and tongue.

That you have skype, messenger, facetime (or whatever) doesn't mean that you shouldn't use it.

Publicly reveal that you are a wargamer. Perhaps this is the best opportunity you will ever have to put a positive spin on wargaming to people who would normally think it was weird. While various people in isolation are struggling to read 'Ulysses' or learning to appreciate jazz, you can smuggly extol the virtues of a hobby that has already accustomed you to long periods of time alone and exacerbated anti-social tendencies that some are only now coming to comprehend.

Just breathe. I know it's one of those cod psychology catch-phrases that at first, second and third look appears stupid and pointless, but when you think about it, breathing is quite important, and perhaps it is something we could consider continuing to do?

At any rate, I hope that this list will provide some helpful ways to fill fellow wargamers' quiet times over the next week or two, when you need a break from painting, gaming and reading about the same.

Delium got an outing the other night in what was the first proper wargame in the new pad. Of course, there could only be one ruleset with which to christen a house: Lost Battles. Bursting through the centre were the Thebans, who completed a speedy and resounding victory. 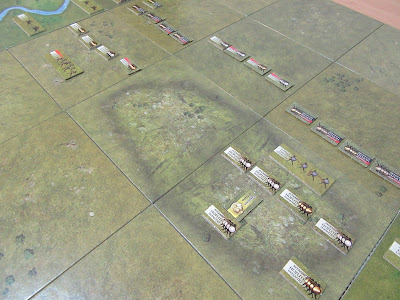 The hoplite battles have quite a distinct feel. They are over very fast, and you have to pile in with all you've got as quickly as you can.

For the Big Move ™ down south I was quite worried about how the figures were going to manage the journey. I wasn't entirely sure of the best way to pack them, so like a good libra I settled for three different approaches.

This was recommended by various people. I didn't have enough space to send as many drawers as I would like, but I used this for elephants, chariots, pikemen, and figures which had a variety of poses on each base.

This is an extension of the first method. Used for baggage trains, cataphracts, heavy cavalry.

This was something I thought would save space, and might actually protect the figures provided I had varnished them as well as I thought I had.

This is a brief explanation of the method:

1. Box measuring approx. 330 x 300 x 100 is found and labelled in pen for easy reference and in the hope that it will deter the customs man at the New Zealand end from opening it... 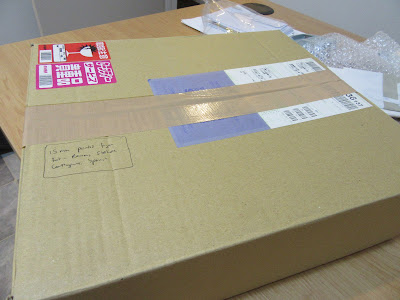 2. In the box matching base is stacked on top of matching base so that the figures are horizontal and the base edges themselves are holding any weight. Sometimes the figures slot together; other times they sit head touching head. 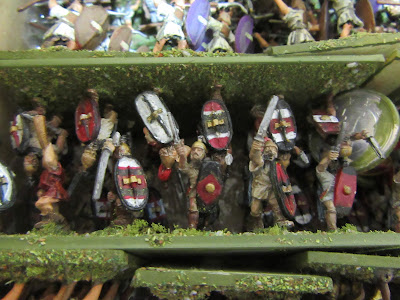 3. Bases are stacked along bottom of box in rows, with some variation to make sure they are packed tight enough that they will not move around. 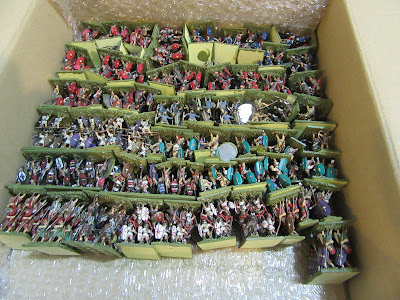 4. Figures mounted singly on coins are inserted into the gaps head first. 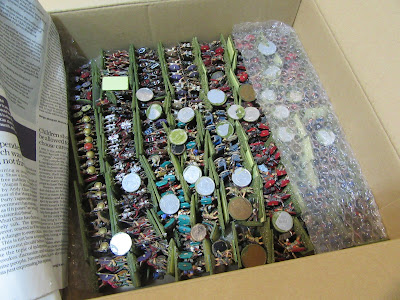 5. Contents are covered with packing material so that nothing can move. 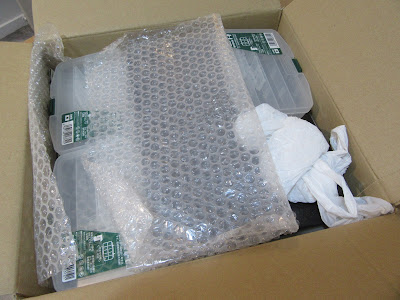 Box is closed, taped, and subjected to several species of incantations chanted in an ancient and barbaric tongue.

6. Contents are pulled out of box at destination and inspected. 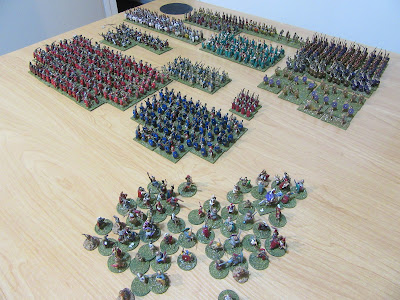 And it's not too bad: two shields and a pilum came unglued, and one Miniature Figurine bendy spear broke. Otherwise, no damage.

Three more boxes' and an ice cream container's worth to go! 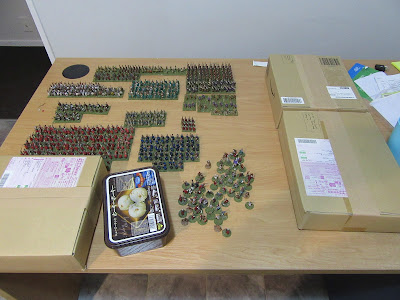 Hopefully they will come out in similarly good nick.