War of the Ring

A couple of chaps who live locally and have been featured on this page before were keen to get together for a postprandial game last night, and with one of them a committed Tolkien man it seemed an opportune moment to try out War of the Ring.

Being quite taken with the idea of an evening stroll in Middle Earth, Matt and Ben inhabited the earthy cloaks and shining helms of the Free Peoples while I assumed a darker - you might even say more shadowy - guise.

We didn't really know what we were doing (which incidentally favoured this incarnation of the Shadow, whose main strategy seems to be a blunt one: attack with overwhelming force), but here is a short AAR anyway.

The Shadow mobilised for war and took Lothlorien almost immediately with a scarcely credible series of dice rolls. Rivendell was thence bent to our Will.

For the Free Peoples the Elvish folk were ready for war but no one else cared to entertain the thought. While Gandalf and Strider detached from the fellowship and sped around in a vain yet Churchillian endeavour to warn the North and Rohan (and everyone else) of the coming peril, Saruman prepared and struck at Rohan with all his might, or at least a decent percentage of it. Helm's Deep fell without a blow, and Edoras too was abandoned.

Why was Edoras abandoned? Because the Rohirrim, fighting fire with fire, sought to capture Dol Guldur from the forces of the lidless eye.


And so an entertaining game of move and counter-move followed as both sides utterly disregarded the Ring and strove to win a military victory.

The Free folk took Angband and threatened Mount Gundabad - which would have left them one VP shy of victory - but the Shadow retaliated by taking various other spots and threatening Dol Amroth, leaving Sauron two short of a dark triumph of his own.


But with both sides still a turn and some good results away from win, the bell sounded, and we were obliged by our native good sense to call it a night.

We were all over the place with rules and strategy, but in spite of that the game was great fun, and we could all see the potential there.

Hopefully we'll get to play again.

Email ThisBlogThis!Share to TwitterShare to FacebookShare to Pinterest
Labels: boardgames, War of the Ring

After a couple of weeks of diminishing returns in attempting to finish off some 15mm figures, I decided that I would clear the hobby room table and give another boardgame a go.

Having already tried one of the battles without making much progress, I resolved this time to make the effort to properly learn the rules for Blood and Roses, a game from Richard Berg's Men of Iron series. 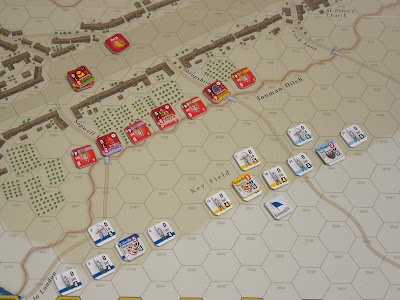 The Yorkists (White), arrayed in three battles, are endeavouring to give the Lancastrians a bloody nose and force concessions out of the king.

The Lancastrians are ensconced behind the Tonman Ditch, which, while difficult to traverse, is rather longer than the Lancastrian line. The Yorkist intent then is to get Salisbury across on the left and York across on the right to turn the line from both ends.

Sadly for the Lancastrians, there's not a great deal they can do about it. Their troops are average, they are outnumbered, and they have no longbowmen.


The tactics for the Yorkists are pretty obvious: outflank them; soften them up with the bowmen; then attack with qualitative and numerical superiority.

Salisbury gave us a textbook example, as seen below:

And after this the net got ever tighter.


With the Lancastrian strategy being merely to hold out until nightfall, there were few chances to counterattack. But when those chances did come, they were led by Clifford, who fought desperately to protect the king and fend off that rabid dog, Salisbury.

The king's person changed hands twice, but York would not be denied.


The heroes of the day for York were many, but for Lancaster only Clifford could hold his head high.

I'll give this scenario another shot or two and look to make sure I'm doing all the rules right (there is a suspicion that one or two things may have been a little 'outside the book'), but once I've done that, I think that I'll enjoy working through the other battles in the box. For all that a boardgame lacks in spectacle compared to miniatures, it's a lot cheaper, it's less time consuming, and it's more portable than two all-options Wars of the Roses armies in 15mm would be!