The second of my o-bon gaming days was in Osaka with Luke, where we got a Modern Spearhead game in, utilizing his Czechs and my newly-painted Americans.

We were fighting over five objectives - four towns and one hill - each worth two victory points.  An additional two VPs would be gained for each enemy fighting battalion wrecked.  Having taken a 'b' option of extras to Luke's 'a' option I started the game down 2 VPs and would need a good performance on table to make up the difference.

The image below shows the table with objectives marked.  The Americans enter from the top edge of the board and the Czechs from the lower.

(Note that all 'map' photos are courtesy of Luke, though some will be altered by my fiddling them about in MS Paint) 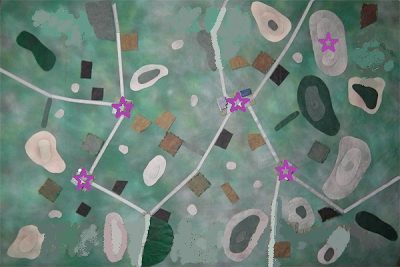 My Americans were organised into one mechanized infantry battalion (1/30) and two under-strength tank battalions, 2/64 and 3/64, with the latter reinforced by a company of infantry in M113s.  I also had two off-board artillery battalions, one of M109s and the other of M107s.

Knowing Luke as I do, I expected there would be a lot of Czech artillery and rocketry to deal with, so despite the extra cost in VPs I thought it was essential to take M107s so that my counter-battery fire would pack a punch.  The extra company of infantry that came with this option would also give the armour of 3/64 a bit of extra backbone, so I felt it was worth the VP handicap.

As far as plans went, I was in two minds.  The basic idea was to use the mechanized infantry to secure one town and use that as the base around which my tank battalions could operate, but there were a number of ways that this approach could be realized.

The first option was to concentrate on repelling the flank march I expected on my left, thus: 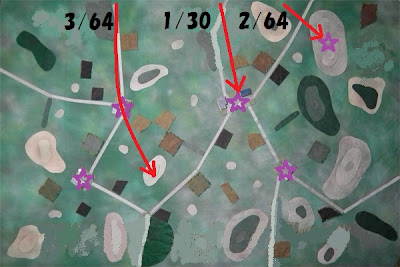 Despite the attractiveness of securing my left, the problems with this plan were twofold: the tanks of 3/64 would likely be open to an attack on their flank over this route of advance and there would be little chance of reinforcing them.  The other problem was that the second tank battalion, 2/64, would be obliged to either sit waiting for Luke's flank attack to arrive or push ahead, through forested terrain.  That seemed to be too restrictive, and I did not have enough men to let some lie idle.  In the end, I went for a second option that looked like this: 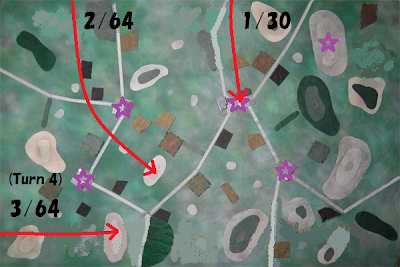 This plan clearly had weaknesses too - most obviously in having unsupported infantry on the left - but a flank march would, I felt, give me better mobility overall, keep the Czechs guessing as to the make up of my force, and offer the chance to take up the offensive on my right without losing the ability to change to a more defensive stance if the situation demanded it.

I was not sure what Luke had (seven battalions, as it turned out), but as mentioned I figured that he would be doing a flank march - or perhaps even two - and using the rest of his force to tie me down while the rockets and artillery did their work. 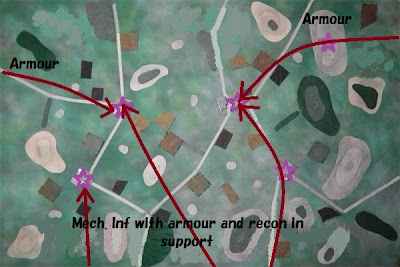 I needed a plan that would allow me to counter an attack of this nature reasonably effectively provided that his flank march(es) did not arrive too early and that he did not get too lucky with calling in his artillery.

I reckoned it would take about six turns to wear down his left - assuming that my own flank march arrived in time - so if my left could hold out that long there was a good chance I could turn his flank and win the game.

In short, I hoped my plan would do the trick!