Bits and pieces, and a wargame.

As must be fairly obvious from the lack of postings on this blog, there hasn't been a lot of recent action on the wargaming front for the relocated Prufrock. But there has been plenty going on in other areas of life.

On the not-so-good side, we lost our much loved patriarch at the end of September after he finally succumbed to that insidious disease which picks people off from families everywhere. He was brave to the last and it was a privilege and a blessing to have had him in our lives.

Similarly, it was a mournful evening last week when the mighty English blasted our noble All Blacks to smithereens in Yokohama.

More positively, South Africa then crushed the English in turn to win a well-deserved third World Cup title. To be honest, I would have been almost as happy had England won - so good was their performance the previous week - but for the South Africans to triumph after having looked a shadow of their former selves not so long ago is great for rugby and for their country. It also gives nice bragging rights to the host country - the only game they lost was to the eventual champions!

The job is going well, house hunting is about to begin, and my wife and kids are moving over at the end of November, so this drawn-out process is now starting to look like it is producing results. It's been a long few months since February, but video phones are a wonderful thing!

Despite everything else that's been going on, there has been some gaming: I introduced a friend to Commands & Colors: Ancients not so long ago; while an epic night of rum and chess at an old school mate's place in Rarangi will live in the memory.

To close, here are a few pics of the last miniatures game I participated in, this one being a huge ACW battle in 28mm at Roundie's. It was a fine contest with plenty of blood and thunder, and even a crossroads.

We deployed quite craftily as defenders and I thought we'd done enough to beat those damnable Secessionists, but it was not to be. They held on their left, but we (mostly...) controlled the centre and pushed them on their right to take the advantage in victory dice scored. Unlike with victory points, however, victory dice still have to be rolled - and we rolled miserably, giving the staunch men in grey and butternut a famous victory.

As you can see, Roundie's table and figures are really something.

So there we are. Hope all readers are well and in fine fettle.

Email ThisBlogThis!Share to TwitterShare to FacebookShare to Pinterest
Labels: ACW

It was sad to hear of the passing of the legendary board wargaming designer Richard Berg last week. His Pax Romana is one of the top three board wargames ever made* and he really had a giant influence on the hobby. He divides opinions like almost no one else, but when he was good he was very good indeed.

I don't have any stories of contact with the great man myself, but wargame buddy Pat did tell me how in pre-internet days he and a friend had once rung him from Canada at a tense moment to resolve a critical rules issue. Apparently Mr. Berg was very gracious about being woken up in the middle of the night. Whether he was able to provide a satisfactory answer to Pat's rules query is harder to say!

I tell you what though, being the guy who designed Pax Romana, Rise of the Roman Republic, Terrible Swift Sword, Successors, Great Battles of Alexander and many more is a pretty decent legacy.


Cast a cold eye
On life, on death.
Horseman, pass by!

Last weekend I was lucky enough to be invited out to attend a 28mm Napoleonic wargame put on by local wargamer Roundie and his mate Keith, using the General d'Armee rules.

As far as I can recall, it's only the second Napoleonic miniatures game I've ever played - the first being some 25 years ago! - and it was simply magnificent. Roundie's table, terrain and figures were marvellous to behold. Honestly, it was like stepping into a wargames glossy photo shoot. Having been used to a rather more modest approach to wargames terrain, I was blown away by the spectacle.

And the rules and scenario weren't bad either. As part of the Austrian command, our mission was to clear two hills situated either side of a prominent church. We had five brigades - two of line infantry, one of grenadiers, two of horse - with which to do it, and were up against six or seven French brigades.

Without boring people with all the details, we got our artillery into good positions which allowed us to take toll of the French first encountered, and thence to eventually get onto the hill on our right. But there were too many French for us to drive off completely, and we never quite had the command resources to get our cavalry into play early enough to make a difference.

The game itself was very good. The scenario was nicely (im)balanced, with the Austrians having initial deployment and weight-of-numbers advantages offset by French proximity to objectives and quantity of reserves.

I thought the rules were straightforward and play was driven by a pleasing mix of player decisions and dumb luck. The command and control mechanisms were playable and easy to understand, but still involved giving orders. There were obvious advantages to wearing down the enemy, but melee combat was risky, and even the best prepared attacks could go wrong.

It was a great day, and I really enjoyed getting the opportunity to command troops in such a magnificent setting.

To finish, I'll chuck on a few photos of the action.

As I say, a most enjoyable day of gaming with our host Roundie, Keith umpiring, and the fearsome French under Rob and Michael. I would certainly want to play these rules again.
Posted by Prufrock at 11:40 PM 8 comments:

Hello all, long time no post. Still in New Zealand, and while I've been lucky enough to meet up with a group of gamers locally, I've not had the time to really take advantage of the fact. But if there hasn't been much wargaming doing, there has at least been some occasional jamming down at one of the local bars.

So in that spirit - and while I wait for the wargaming side of things to pick up - here's a bit of the late great one and only Rory Gallagher.

Hope any readers who may see this are well and in good fighting fettle!

Hello again all; have been off the radar for the last couple of months for various reasons, so I thought it was probably about time to drop in with an update.

Not much of wargaming note has taken place, though I did manage a Vassal game of Decision Games's Battle for Germany with boardgame mate Pat (late of Kobe, but now in Kyoto). It's a fun game, and it was neck and neck until Pat liberated Berlin with his Russians.

Funnily enough, I've managed a spot of painting, in this case for the old man's Settlers of Catan variant, which needed some 'desert raiders'. Twenty-four 1/72 figures from the HAT Almoravids box did the trick, and the painted figures do add something to the game. Settlers is a bit of a family favourite, and has taken over from Risk as the default when it's gaming time, so I expect they'll get plenty of use. The price of paints and painting supplies over here did make me gasp somewhat, however. I'm used to paying NZ$2-3 in Japan, so I just about blew a gasket in the store that passes for a hobby shop in Nelson.

I also had to do a quick return to Japan for family reasons in early March, and while there found Tsukuda Games's Battle for Hoth in a second hand store. The box is pretty beaten up, but everything else is in good nick (provided the treatment I'm adopting to straighten out the warped boards works!), so it was a nice little score, I think. The same shop had the other two in the series too - set on Endor and the Death Star - but those appealed to me less, and I only had so much room in the suitcase given the need to bring in some reasonably priced paints!

To finish on a less happy note, as readers may be aware, New Zealand was hit by a terrorist attack last Friday. It was not the sort of thing you like to see anywhere. I won't go on about it, but felt it needed to be mentioned.

Anyway, until next time!

Have finally managed to get all the 15mm figures painted during the big push last year flocked and ready to go. 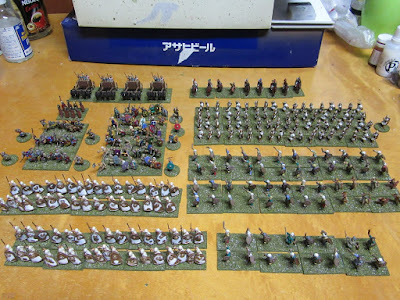 It's a bit of an eclectic mix, but especially pleasing were figures that came from fellow bloggers. One set, from Aaron Hunt, was kindly sent to add to my Dux Bellorum project. They are a mix of Old Glory Saxons and Germans, and they were very nice to paint, even though they were done quickly. For my purposes they will be mercenaries or local roustabouts. Many thanks, Aaron! 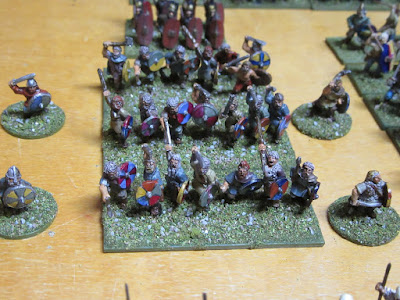 The other set of models comes from Jonathan Freitag. These four Carthaginian chariots will add weight and heft to my existing (but previously puny) chariot arm and turn them into a force to be reckoned with. Many thanks! Sorry that the photography is a bit off, and the painting is not quite up to Jonathan's own high standards. 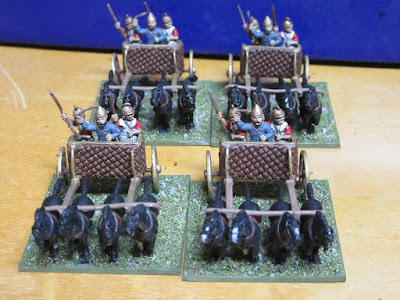 The other big talking point is the infantry for my long suffering nascent Achaemenid Persian force. Mystified readers may wonder why they are flocked in green: the answer is that in my wargaming world, everyone is flocked in green. 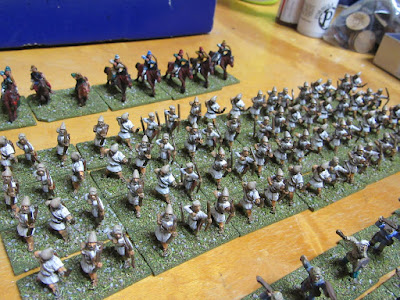 So there we are. Nice to have them done, and very pleasing to now have more contingents from greatly esteemed bloggers to point out to anyone who happens to show any interest in my poor collection!