There was a nice visit from the postman today to drop off an order I put in with Navwar last week. The parcel was sent last Thursday and arrived this, so that's pretty good timing.

I was a little apprehensive about ordering through Navwar due to their old school system, but I needn't have been. The service was excellent and I shouldn't have waited so long to get on the horse..

Anyway, first up is a US early war starter pack. 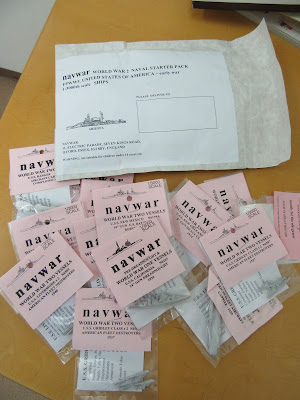 Next is the US late war starter pack. 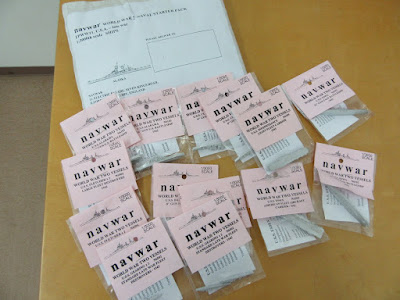 There is also a selection of goodies for some 'Four Against Japan' early Pacific War scenarios from the very useful Fire on the Waters site, and - I couldn't resist - Bismarck, Prinz Eugen, Hood and Prince of Wales for one of the first naval battles I read about as a kid. I still remember feeling devastated reading of the loss of the Hood. 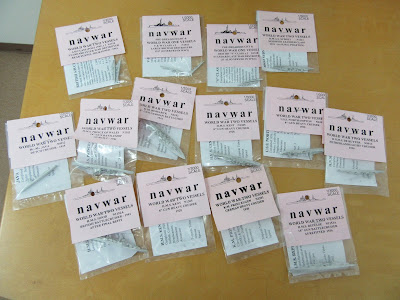 So, plenty to keep me going here!

Email ThisBlogThis!Share to TwitterShare to FacebookShare to Pinterest
Labels: 1/3000, Navwar

I spent an enjoyable evening last night muddling through a test game of Bill Butler's Scutarii featuring Pompey versus Sertorius and based on a Classical Hack scenario.

Notable features are using d10s for combat (variable # of dice per unit class rolling against a defence number type scheme) and morale tests, with the morale tests occurring at the start of each players' turn.

Unit morale is tracked over three stages - normal, shaken, routed - and units also track hits, with each hit a permanent subtraction from the unit's morale number, making it more likely they will fail the test and drop a level.

This leads to units being worn down by the accumulation of hits until they become shaken and then next morale failure sees them gone, probably taking a few others with them.

There are a few 'fast-tracks' to shaken - hitting units in rear, etc - so exploiting that is probably a key tactic for old hands (which I am not!).

Nice clean turn sequence and fairly easy to get the hang of.

There are lots of ways to classify units (type, grade, drill, regular/irregular, open/closed order, missile/non-missile, etc) so you can build troops to match your own ideas as desired.

It's quite different from what I've been playing the last few years, but I like it. It has the wearing down and morale collapse dynamic you get in Lost Battles but at a more tactical level. It was also a nice change to see both manoeuvre and combat featuring more concretely (as opposed to more abstractly) on table, and lines ebbing and flowing rather than either being there or not being there.

My biggest issue at this stage is with the markers required to track morale level, hits and disorder. I'll need to organise a system so that I don't have unsightly clutter on the table.

Anyway, nice rules, I think. Would be interested to hear if anyone else has played or is playing them.

Email ThisBlogThis!Share to TwitterShare to FacebookShare to Pinterest
Labels: Scutarii

I've been in the ancients doldrums since our Society of Ancients battle day game way back in April and have been looking for something outside of my usual game options to put some - ahem - wind back in the old sails. By chance, I remembered there was a scenario book for the Classical Hack rules hidden away in a storage cupboard, so I grubbed around for it to see if it would provide any inspiration. 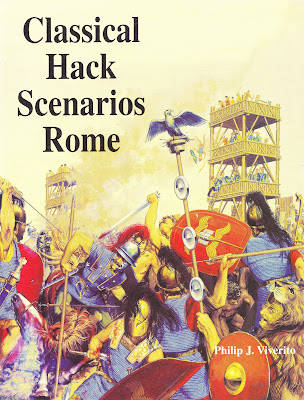 It's a little hard to see the Table of Contents in this scan (it should be better if you click on it, however), but the book contains a number of battles from the Sertorian era, and these might just be what I'm looking for. 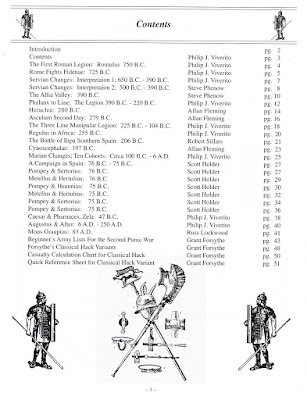 A quick inventory will show what can be put on a prufrockian table:

'Roman' Cavalry:
6 bases of Samnites, who can I think pass for generic rough-and-ready cavalry from the period,
19 bases of mid Republican era heavy cavalry,
4 bases of Tarantine cavalry.

10-13 units, depending on how they are organised.

I'm probably a little short of Spanish to do the bigger scenarios as they are presented here, but I'm sure I can adjust the numbers to fit as needed.

The next thing to think about it is which rules to use.

I have (in no particular order) Scutarii, Lost Battles, To the Strongest!, Might of Arms, Sword and Spear, Hail Caesar, modified Dux Bellorum, Warmaster Ancients, Armati, Commands & Colors, Classical Hack, or my homegrown set.

I think I want to avoid squares this time after using them for the battle day game, so that narrows things down a little. Also, if I want to change things up, it is probably a good idea to try a rule set I haven't played very much (or, indeed, at all!).

Well, we shall see. I'm not sure if I'll get a game in before I go back to New Zealand for a quick visit at the end of the month, but I can at least enjoy getting some planning and rules-learning done.

Email ThisBlogThis!Share to TwitterShare to FacebookShare to Pinterest
Labels: plans