Next off the painting conveyor belt is a bunch of Persian horse. These make a start on the Late Achaemenid army I have had languishing in tool boxes for about ten years.

These should really be fancier, but I can always come back later and add a little bit of decoration to the tunics.

For now I just want to make some progress in reducing the number of the boxes I have full of prepped and undercoated figures... 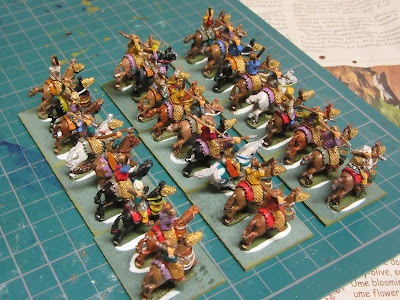 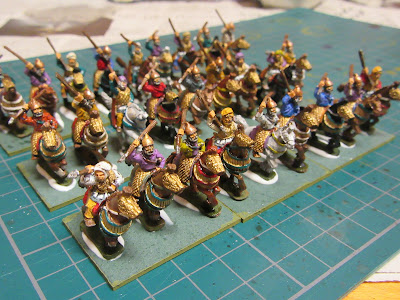 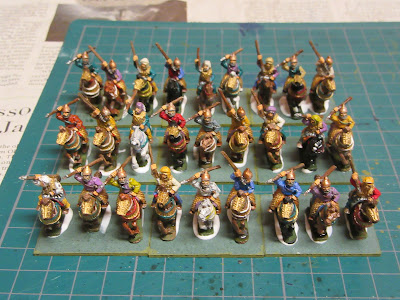 .
These are mostly Old Glory 15s, with a couple of Essex in there as well.

It wasn't all plain sailing though - I managed to knock over and spill my decade old bottle of magic acrylic stain tonight, so I'm going to have to head down to the local hardware store tomorrow and see if they still stock any of the same brand, and hope that if they do, the formula hasn't changed!

As an aside, I've noticed that in the last calendar month I've managed to knock out 170 foot and 27 horse, which must just about be a record for me. I still have a couple of days to go, so might have to pull finger and get something more finished, just to make sure!

What's all this then?

All looked fine enough. Nothing to see here, we thought. Push on through. Crack on. Hills, valley, river, woods. Camp on this rise tonight were the orders. Seemed fine enough. Didn't seem anything to worry about. 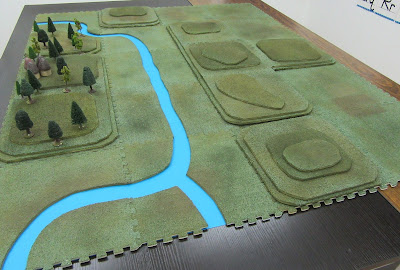 So we came up. But what's all this then? we said. The place was crawling with them. Gauls. Where'd they come from, the blighters. Must have been waiting for us in the woods.

Well, they got one up on us, that's for sure.

But we had old Titus up front. No one scares old Labienus, and a good thing it was for us, too. There he was with some mutt of a dog he'd whipped into line. Oh, we could tell you a few stories about old Titus. A good man to have there though. A good man to have when things are going south. 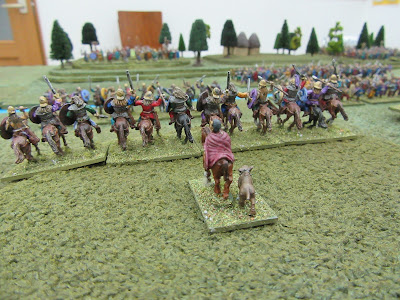 But our lads - all of them - were cool as could be. The foreign slingers started doing their thing and they did some bloody murder on those Gauls. Caught them in the river. It was bloody murder, I tell you, whizzing those bullets through the air. And then Titus went in against their cavalry. This was on the left. Just broke them, just like that. Oh, he was fine was Titus. Fine.

And all the while the chief was ordering men forward. Down tools, he was saying. Get forward. Don't worry whose standard. Just get forward. Make a line, he said. Make a stand. I'll get us out of this. And so we did. We went forward. Even the new men. Even them. 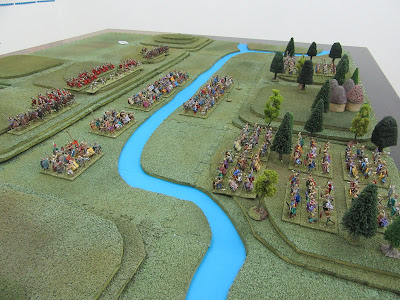 But they came on you know. Poured across that river. Whacked our cavalry on the right. Not Titus's cavalry you understand; the cavalry on the other wing. They couldn't take the heat. They ran. Couldn't drive off our light infantry though, and Titus was still sitting pretty. Laughed at them as they came forward, some said. Can you imagine it? Laughing at that time, in that place, faced with those men? Imagine it. 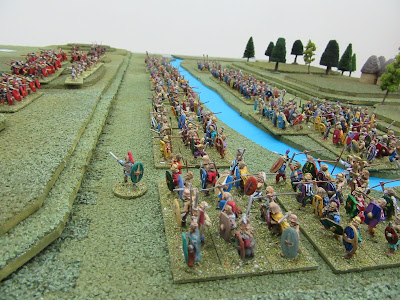 We wouldn't let them onto the hill. The chief kept us going forward. Into them, he was saying. Get forward. Don't crowd. Leave yourself room for sword work. So the ninth and tenth came up to join Labienus, and on the right the seventh and the thirteenth got into the act. Brave boys they were. That Gaul leader - Boduognatus, I think they said - was across from them and he was fair foaming at the mouth by this stage.

He'd hit the twelfth hard. Very hard. Lost almost all the centurions. And they said that for the first time it got a bit hot for old Titus's cavalry too, on the other side. But they'd done their bit. Nothing wrong with what they did. They were Gauls as well, you see. Our Gauls though, and that makes all the difference. 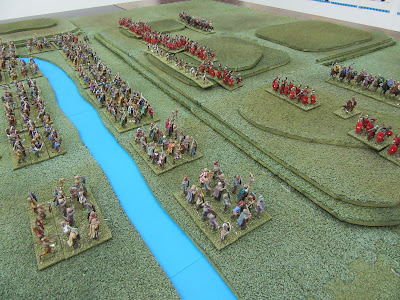 The guv'nor kept sending us forward, and then he came up himself on our right to see what was happening. The twelfth were in a sorry state, and the rest of them too on that wing before too long. They were ferocious, those Gauls. Kept coming. Didn't matter how many we killed, they kept coming. Climbing over bodies, howling, using their fists and their teeth if they had to. They scared us, they did. They right scared us. 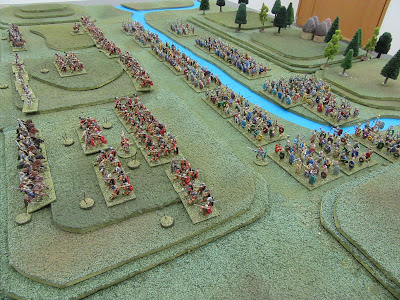 But we kept getting forward, we just had to. Getting up onto that hill. Forming line. Keeping calm. Following orders. Not panicking was the thing. Just keeping your cool.

Then there was a cheer from our boys and we saw that their centre was falling back. Boduognatus kept on though, and we were nearly done, I swear to you. He kept coming. We were all spent. But their centre fell back, and that gave us heart. And then a fresh lot came up, and we could breath a little. 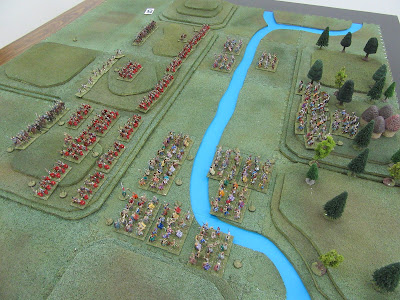 And the chief. He said push on, push on. Use your shields to push, just stab at them around your shields, keep stabbing. And somehow we did. We pushed. And then something broke in them and they were all running, but not Boduognatus. He didn't run. He stood there in that mass, yelling at them, bellowing, we could see him, but the others all just ran, and they took him with them, and once he was caught up they were all gone. Just like that. Gone. Back through the river and into the woods. Gone. 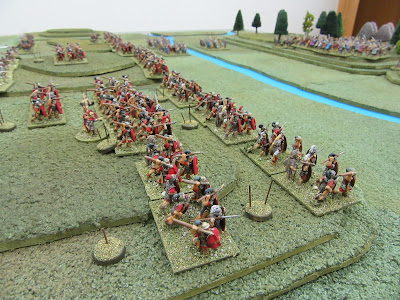 But I tell you, we were wrecked. It was a hard day. We were done. We could only stop where we stood. No chasing that lot. Just binding wounds, helping your mates, looking for our lost. We were done. But we won. We held the hill. We won.

Last of the Gauls

And so the last of the Gauls are done. I don't know if people have ever experienced an antipathy build up over a period of time towards a particular sculpt in an army you are painting, but, in this army, it did. There were two particular sculpts - and four others not far behind - that I grew to absolutely hate. It made painting this army a pretty bad experience, and is a large part of why these last few units have taken so long to do. By the end I just didn't care very much (and it shows) - it was simply a matter of gritting teeth, slapping paint on and getting them finished.

But they are done, and that's that.

You may notice the singly-based figures at the rear. I was planning to throw the dominant sculpt you see there out, but decided in the end that I would condemn it to eternal markerhood. But that might change if I could ever bring myself to paint another 50 Gauls to replace them all. I would get a lot of pleasure out of stamping on them....

But that's 300 infantry and 50 cavalry in total now, so enough for my Lost Battles needs.

Phew, the latest batch - Xyston phalangites - is done, and there is now enough pike to cope with Paraitakene for Battle Day 2018. 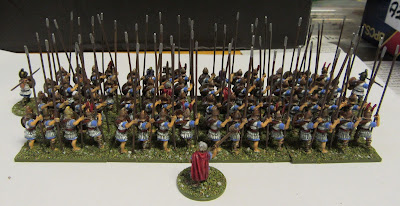 W.I.P and other happenings.

I'd been planning on doing a solo game over the weekend, but it didn't happen. Instead, I've been beavering away on a batch of Xyston 15mm pike.

They're almost done, but are proving to be quite a lot of work. It's actually the first batch of phalangites I've painted myself: the first bunch of 200 was done by Fernando in Sri Lanka. I think I'll appreciate this lot more having painted them myself, and I'll also be forever grateful to Fernando now knowing how much work must've gone into the other batch!

Just for my own records, this is the painting process (please feel free to skip to the next section!):

Other things I've been doing include finishing off an overdue book review for Slingshot and doing the odd turn for a couple of ongoing play-by-email games using Vassal.

The games are the Age of Sail game Flying Colors by GMT, which I'm playing with my Italian mate Andrea, and the WWI Tannenberg game A Victory Complete by MMP, with my mate up in Kobe, Pat.

I don't really know a great deal in depth about either period, but am certainly learning a bit more through the games.

Anyway, that's all for now.

And some more painted up from the leftovers box. This time a mix of Tin Soldier and Xyston 15mm Gauls (with one Old Glory figure in there as well, I believe). These are from a long-stalled project. Still five more units to paint, and it's hard work, because, a) I don't like painting Gauls b) my painting style has changed a bit since I did the first eighteen or so units of these and this latest batch is an unhappy compromise between the old and the new and c) I'm becoming less and less of a fan of the Tin Soldier figures.

Oh well, only a few more units to go. I wonder if I can get through them! 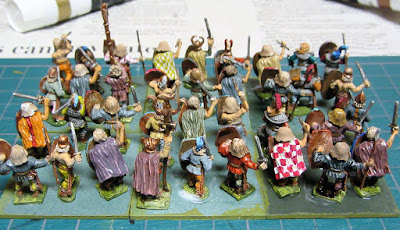 I think the thing might be to do a Caesar in Gaul game and see if that can't motivate me for the last stretch.