It's not often I find a really good bargain on hobby related stuff in Japan, but I did today.  I popped into the second hand store down the road to have a look at the guitars they have in at the moment and serendipitously happened upon these in a corner at a ridiculously low price.  They are from 1998, unopened in the original packaging, and each costing about the same as an ice cream.

I'm not actually much of a Star Wars buff, but I know a few people that are, and if they don't want them I'm sure my boy will when he gets a bit older. 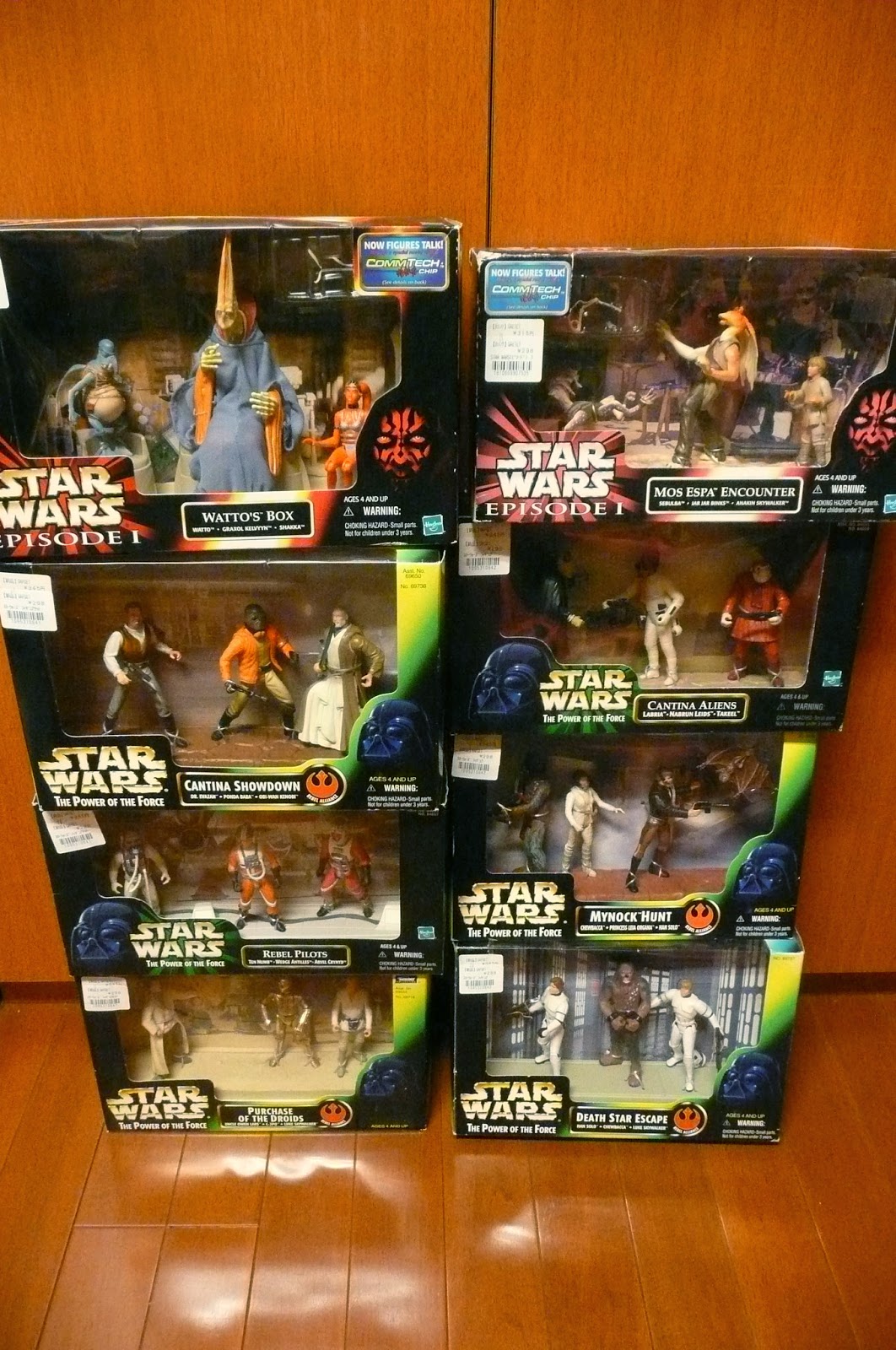 Now, I just have to find some space to store them!
Posted by Prufrock at 6:15 PM 10 comments:

The second game that Luke and I got through on Sunday was Ipsus.  We used the scenario from Strategos I, but changed it a little based on Luke's reading of the battle.

The Antigonids, commanded by Luke, consisted of the following:

The allies, under yours truly, were thus composed:

We used our own deployments rather than attempting any historical one.

Moving first, the Antigonids put out a strong centre of phalangites and a combined arms force in the left centre. Light infantry and elephants were thrown forward in an effort to dominate the middle of the battlefield, and the heavy cavalry was split three left and two right. Demetrius commanded the cavalry on the left and Antigonus was in the centre.

The allies deployed light infantry and elephant screens forward in the centre and centre left, sending most of the cavalry to the right in an effort to counter the influence of Demetrius. The phalanx formed up to match the enemy line, with the scythed chariots deployed centre right.

The Antigonids advanced in the centre and on the extreme wings.  The left centre was kept back due to a poor command roll; nonetheless, the initial attacks were successful, scoring two hits and shattering a unit of levy light infantry which, caught without heavy infantry support, was unable to negate the second hit.

The allies replied by advancing to attack with the cavalry on the right. For all their efforts, only one hit was scored on Demetrius' force.  The enemy skirmishers were driven off in the centre, but the scythed chariots were notably ineffective.  With commands running short, on the left a decision was made to extend the line wider rather than advance in support of the forward elephants.  Three hits were made this turn.

The failure to support the elephants was seized upon by the Antigonids.  The elephant screen was shattered immediately and this galvanised the attack all along the line.  Demetrius, putting himself in the forefront, oversaw a devastating attack on Lysimachus in the cavalry battle on the left.  There were six hits and one shatter this turn.

With the battle in the balance Lysimachus threw everything into an attack on Demetrius, but the gods were smiling upon the latter and the allied cavalry were ineffective.  Elsewhere, two hits were scored.

Twin assaults at opposite ends of the field now struck vital blows against the allied cause.  Lysimachus was killed in an attempt to rally hits on his zone, which caused a general panic, carrying off the cavalry and in a cascading effect, the fragile elephants nearby.  In their centre right the combined arms force made a crushing attack, leaving only one enemy unit on the field, and that spent. Five hits were scored this turn, including a shatter and a general killed.

Rousing themselves at last, the allies drove into the central phalanx and the redeployed elephants made short work of the enemy left wing. Five hits and two shatters were scored.

Demetrius now sent the cavalry around to encircle the enemy phalanx and put the fear of death into them. Two more hits saw two more shattered units, and this was enough to send the entire allied army into headlong flight.

It was another one-sided battle, this time 114 to 39 to Luke and his gallant men.  Dice were again a major factor, but as we were in charge of our own deployments, I cannot help but feel that I left my left weaker than it should have been and made a couple of decisions which, in hindsight, look suspiciously like tactical mistakes!

Again, a thoroughly enjoyable battle, and one-all was pretty fair reflection of the day's play.

Here also is Luke's take on the action, which will give a slightly different perspective!

I was fortunate enough to have Luke make the trip down for a game day on Sunday.  He brought down his impressive collection of Naismith Macedonians mounted on 80x80 bases and the plan was to do a Successor battle or two and discuss a few things that he's been working on for his own projects.

First up we did a Raphia refight using Lost Battles.  Luke took the Ptolemies and I the Seleucids under Antiochus III. We used the 'historical' deployment and got straight into the action.

Under the Lost Battles rules, The Seleucid forces are represented thusly:


The Seleucids start with a refused left and the bulk of the phalanx in a strong central position.  The elephants are on each wing and Antiochus is on the far right leading his veteran cavalry.

Ptolemy has advanced on the centre left and on the right.

Ptolemy has first move, which he uses to bring up the phalanx and advance on his right to engage the refused flank.  His attacks are not especially successful, resulting in only two hits.


The Seleucids press the attack on the right and apply as much pressure as they can in the centre and against Ptolemy's zone.  They score seven hits and an all-out attack, which is a pretty good return if I do say so myself.

The Ptolemaic forces hit back as strongly as they can, but only three hits register.  Importantly, two of them are against elephant units.

Antiochus now breaks through on the right and the phalanx continues to make good ground against the enemy.  Four hits are scored, and one unit is shattered.

Antiochus advances around the rear of the Ptolemaic forces.  With the enemy both in front and behind them the light and mounted troops in Ptolemy's zone flee in the face of another successful attack.

In an attempt to preserve the left the cavalry takes off on what is euphemistically called an 'outflanking' manoeuvre.

A strong showing sees four hits scored by the Ptolemaic centre and centre right, but they cannot break through just yet.  The veteran infantry on the left, threatened with overwhelming odds, begin to march off the field.

Antiochus sends a unit to sack the enemy camp and turns himself into the rear of Ptolemy's centre.  The phalanx continues to push and under this pressure the remainder of the enemy army breaks and runs, with thousands presumed slaughtered in the pursuit.


It was an entertaining but pretty one-sided game. There were some tense moments on the Seleucid left, but more than anything this was a battle decided by dice and (I'd like to think!) by the judicious positioning of Antiochus' victorious cavalry to have maximum impact on the Ptolemaic morale.

The final victory points favoured Antiochus 111 to 34, but the return match would not be such an unhappy one for our guest...

Just a wee reminder to myself that I really do need to get back painting again at some stage. Realistically, winning the lottery and sending them all to Sri Lanka is looking more and more like the best option!