Phil Sabin's Lost Battles uses a standard universal IGO-UGO turn sequence, with the potential for turn reversal if a particularly brilliant general is present or there are dodgy weather conditions.  Unusually, combat in Phil's rules is not simultaneous, and an army can only score hits on the enemy in its own turn.

There is thus considerable advantage in getting in the first attack, especially in the cavalry fights, for these tend to be bloodier and resolve more abruptly than the clash of infantry.

Balancing this first attack advantage, the player moving second will get to see what the first player does and can then react accordingly; perhaps establishing superiority in one sector of the board, refusing a flank, or setting up a defensive trap.

This works well, and makes for a grand game, but I have often thought that it would be a relatively simple matter to introduce more fluidity into the course of events by dispensing with universal IGO-UGO and using, instead, alternate movement phases.  Lost Battles employs a derivative of the pip method to control movement and combat, so the idea is that instead of Player 1 performing all of his movement and combat and then Player 2 doing the same, Player 1 could perform one movement or combat action - expending command points as usual - and then the active role could pass to Player 2, who would in turn perform a movement or combat action and then return the active role to Player 1.  This alternative move sequence would continue until both players had used up all of their command points or had both forfeited their remaining command points by passing up the chance to act.

So, how would this change the game?

1) More interaction between players and less downtime while waiting for an opponent to finish a turn.

2) The advantages of moving first or second will change over the course of the game, and players will be able to control this to some extent.

3) There will be advantage in conserving command points so that a player can get a series of moves in last.  This could lead to the use of 'filler' moves so that players can jockey to get the last phase.  In order to make this less attractive, the player who moves last in any turn should move second in the turn following.  This may not, however, be enough; some additional rules may need to be introduced to prevent filler moves.

4) The turn-reversal ability that brilliant generals have would no longer be as effective.  There may need to be some (possibly fiddly) rules concocted to bring that advantage back.

6) The dynamics may change.  It may encourage inertia on the part of the player whose army is on the defensive.

7) It would require 'moved' markers to be used, cluttering up the board and rendering it less attractive.

8) There may be some concerns that come up about when players can declare a new lead unit.


It's one thing to do this in the abstract, and another entirely to see it in action, so I will play out a sample turn of Sentinum to illustrate how it might work.

Here is a screenshot of the historical deployment for Sentinum, with the Romans top of the screen and the Gallic/Samnite host at the bottom.  The action starts in turn 2. 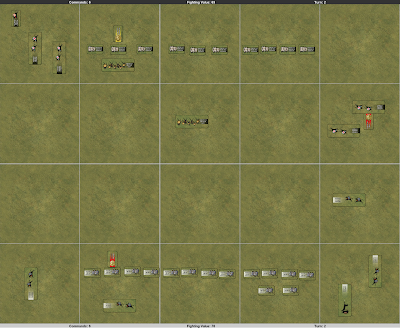 As the Samnites/Gauls have 6 command points + d6 and 1 command exemption from their leader, in standard Lost Battles they would typically first move up the infantry, using 5 commands, at which point they would roll their d6.  They would use the remaining command points that die roll generated to attack from and reinforce their right, and, if there were points left over, to combine or - if they were really lucky - perhaps even advance the cavalry on the left.

In response the Romans with their 6 commands + d6 and 3 command exemptions would attack with the levy light infantry in the centre, the cavalry on their left, and advance the heavy infantry and cavalry of the left if possible.

Given average command rolls, the turn would probably end with the board looking something like this: 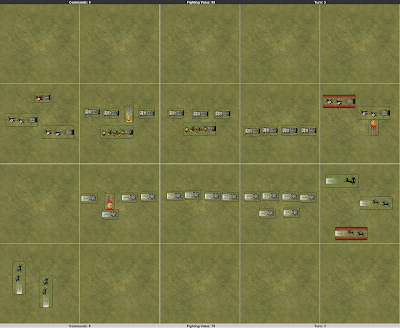 By way of contrast, this is what might happen with an alternate move turn.

Phase 1: Samnites use 1 command to attack with the cavalry on their right.  They roll an 8 for 1 hit on the opposing cavalry.

Phase 2: The Roman cavalry expends 1 command and Decius' exemption to counterattack.  If they can score 2 hits they will shatter the enemy horse.  They hit once.

Phase 3: The Samnites advance the heavy infantry of their right rear into the right centre, using 2 commands.

Phase 4: The Romans mirror their move, advancing into the space in front of the Samnites, also using 2 commands.

Phase 5:  Gallius Egnatius activates the heavy infantry of his zone at a cost of 1 command and his exemption to advance the infantry into the left centre space.  4 commands used.

Phase 6: The Romans mirror this move also, using the exemptions of Fabius to do so.  3 commands used.

Phase 7: The Samnites expend 1 command to advance the cavalry of their left.  With only 1 command remaining they are now allowed to roll the command die.  The result is a 5.  They have 6 commands remaining.

Phase 8: The Romans spend 2 commands to advance the average heavy cavalry against the Samnite left.  They now have 1 command left and may roll the command die.  The result is a 3.  They have 4 commands to use. 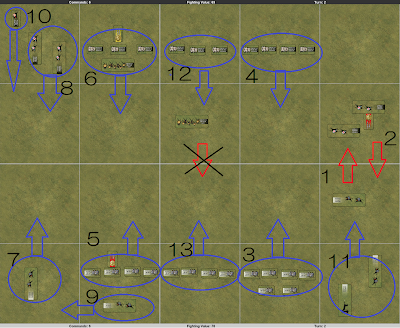 Phase 9: With a 2 command advantage, the Samnites try to prevent the Romans from getting an attack in with the levy light infantry in their central zone.  They spent 2 commands to express move the cavalry of the left rear to join their fellows in the left flank zone.  4 commands remain.


Phase 10: The Romans do their best to generate an attack for the light infantry and advance the veteran heavy cavalry on the right at a cost of 1 command.  They have 3 left.

Phase 11: The Samnites advance the cavalry of the right to join the spent cavalry in the right flank zone.  They have 2 commands remaining.


Phase 13: With no attack possible from the Roman light infantry, the Samnites advance their centre, using the last of their commands to do so.


Phase 14: As they cannot attack and have moved everything they can, the Romans pass and forfeit their last command.


The turn is over, and the map looks like this: 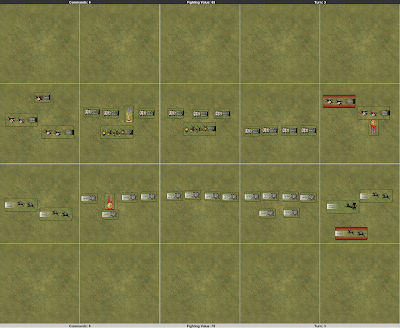 The Romans will get first phase in turn 3 because the Samnites were last to move in turn 2.  It dawns on the Samnite player that perhaps it would have been better to have suffered an attack from the Roman light infantry if it would have given him the first attack in turn 3...

We can see from the screenshots that there is little difference in the on-board situation between standard LB and the alternate move sequence; but I think it's fair to say that there has been more player interaction with the alternative move turn, and therefore more of a battle of wits.

So, is it worth pursuing?  What do you think?