This year's Society of Ancients battle day (traditionally held on the first weekend of April) took Paraitakene as its subject. The battle day, organised by the tireless Richard Lockwood, is about getting as many Society members as possible together at one venue (though gathering elsewhere is also encouraged if getting to the venue is impossible) to discuss the battle and play it out on the table using different rules sets. It's a good occasion and a great example of what the Society is all about.

As I'm in Japan I wasn't able to get to the venue, but I did get a Paraitakane of my own in on Monday. As time was short, I used the tried-and-true Lost Battles rules, though I would also have liked to have experimented with To the Strongest, Scutarii or a modified Dux Bellorum.

The armies deploy, both strengthening their right wings.

Eumenes has more elephants and the edge in heavy infantry quality thanks to the veteran Silver Shields, but Antigonus has the advantage in cavalry.


During the second turn, in order to achieve a decisive advantage on the right flank, Eumenes redeploys the light cavalry from his left to the right. This weakens his left even further, but he feels it is a risk worth taking to expedite the defeat of Antigonus' left and the rolling up of the enemy centre.

Antigonus advances all along the line, but pulls back the cavalry on his left to delay the first onset, reinforcing that wing with more heavy cavalry taken from his centre left.


The fight would be a true revolving door battle: a race to break the enemy's right and expose the centre.

The two centres commence the struggle, with both sides having some success in the central zone, but with Antigonus making no progress on the left.

Both strong wings bully their weaker opponents, with some thrilling exchanges as 'Favour of the Gods' changes hands, either averting catastrophe or pushing again for a breakthrough.

Seizing the moment, Eumenes and his companions lead the charge against the cavalry on Antigonus' left. He breaks two units, but the third holds on and, in a last-ditch charge of its own, cuts deeply into the Eumenid horse, leaving three of Eumenes' four cavalry units shaken.

This piece of heroism may decide the battle.


In the centre the struggle continues. Light infantry are shattered, but the Eumenid morale holds. On the right, Antigonus presses on with his attack against the refused flank. He shatters one unit of elephants, and they take the cavalry with them in rout. Only one unit of elephants stands between Antigonus and the flank of Eumenes' phalanx.

Eumenes attacks on the right again, and this time a unit shatters. Again though the army morale holds firm. Eumenes, when it is his turn to test morale, is not so lucky: he uses 'Favour of the Gods' to fend off a charge, but it succeeds anyway, and Antigonus not only breaks through on his own right, but does so also in his centre, where Eumenes' phalanx crumbles against a succession of concerted attacks, leaving only the Silver Shields still standing in place.

And with that, Eumenes' army is in tatters.

The Silver Shields however are still there, and with Antigonid morale also fragile, there is still a chance that another successful attack or two could turn the tables.


The Silver Shields pile in, but can make no headway. The attacks fail, and with that goes Eumenes' last best chance to pull the battle back.


The next two turns see Antigonus administer the coup de grace. It is not a nerveless victory though - 'Favour of the Gods' just manages to avert what could have been a disastrous end for Antigonus' stretched left centre.


Fittingly, the mighty A himself leads the battle-winning charge, and victory is complete: Eumenes' army is utterly destroyed.


Going on points, the victory was terrifically one-sided (110 points vs 48), but the battle was far closer than the result suggests. As it turned out, that heroic defensive effort by Antigonus' left shifted things in his favour just enough to ensure that Eumenes was always a step behind where he needed to be, and although Eumenes was only ever one or two significant attacks away from parity during the middle stages of the battle, those attacks never quite eventuated, due to a combination of effective use of 'Favour of the Gods' by Antigonus, failed attacks at crucial times, and Antigonid morale holding far better than the Eumenid when tests were required.

So a most enjoyable game, and there was plenty of excitement in it for the solo wargamer even though the final result was so decisive.

Next year's battle will be Telamon, and I hope to be able to fight that one out too.

Near where I live there is a WWII-era island strongpoint that was designed to cover the southern approaches to Osaka Bay. It's a short ferry ride to get there from Kada Port, so we decided to take the kids over for the day and have a look around.

The ferry trip over is short and uneventful. For me it is spent mainly trying to entertain our youngest with a variety of dad techniques, one of which was to give him a bit of a chance to use the camera. He didn't do too badly!


The jetty is on the Awajishima side of the main island, so we slip around and come in from the north.

It's picturesque, but not too hard to imagine that it would have had a different atmosphere 75 years ago.


Third battery originally contained 8 guns in four pairs, all connected by tunnels, and each gun having a 360 degree range of fire. They must have been formidable. 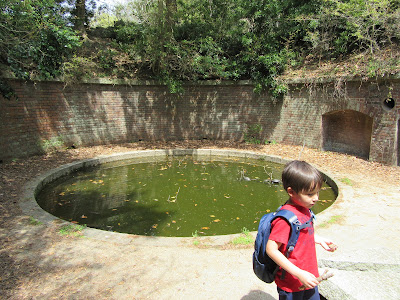 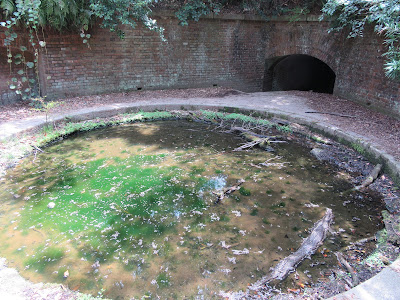 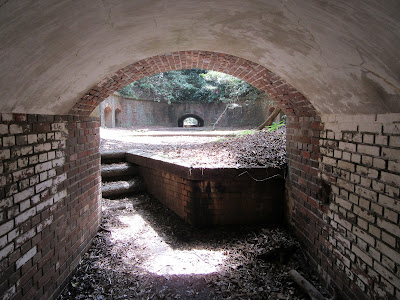 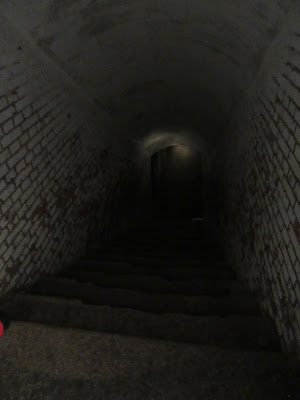 On the west side of the ridge living quarters and magazines were built. All underground or built into the hill, and all connected by tunnels. 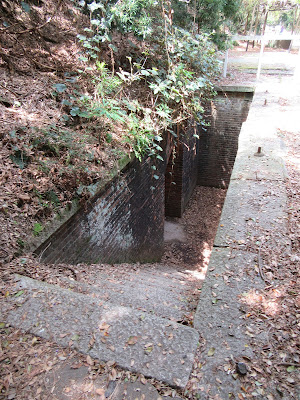 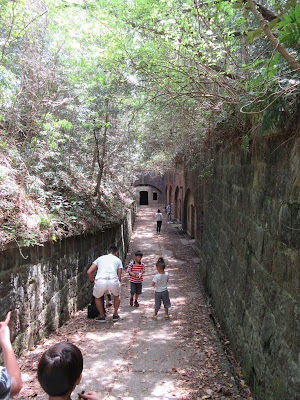 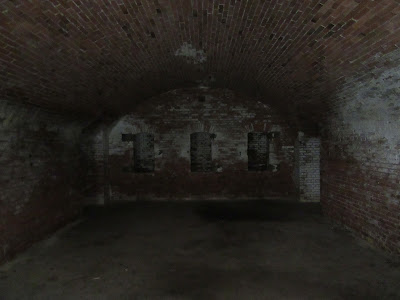 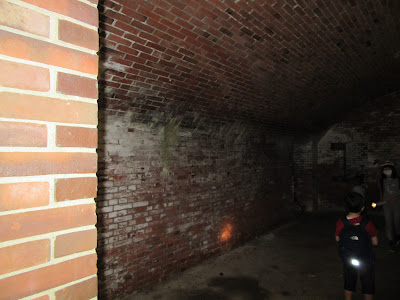 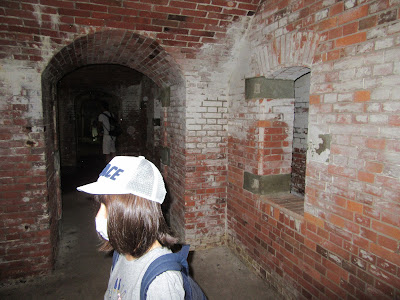 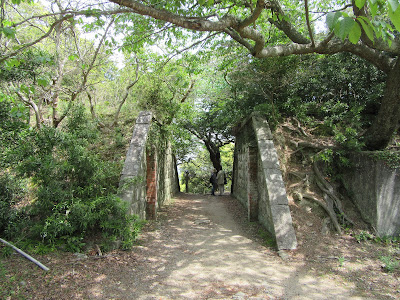 After wandering about Battery three for a while we return the beach for lunch, then head west to look at Battery two. 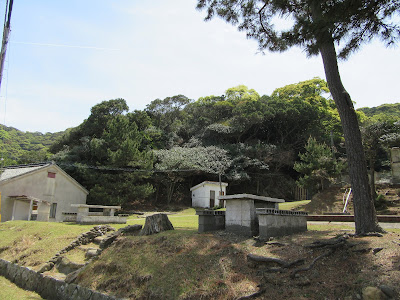 Battery two was designed to look west towards Awajishima,  and had, I think two guns. It was party demolished after the war by the Americans, so you are not allowed to walk over it. 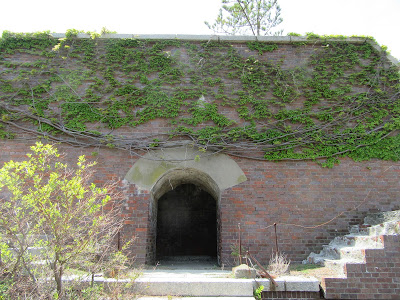 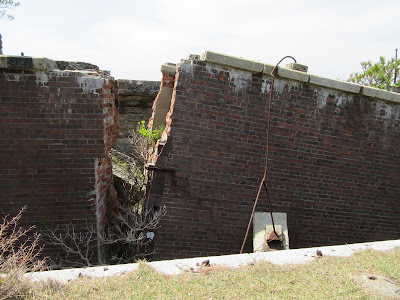 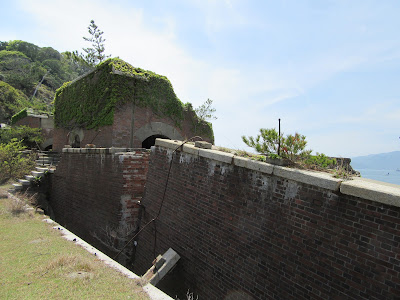 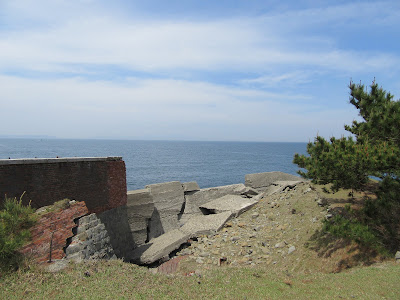 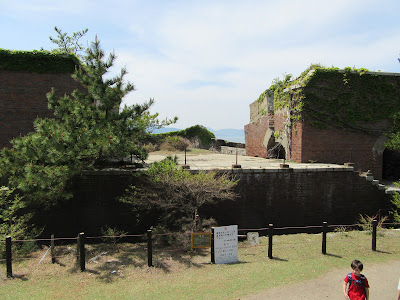 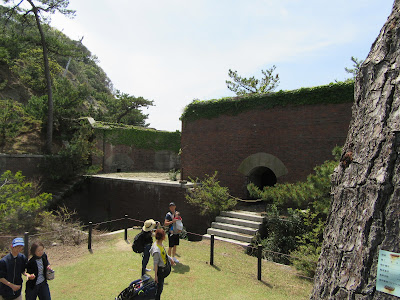 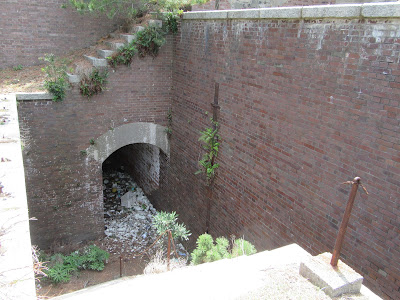 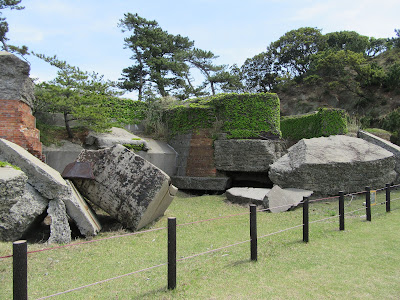 There was plenty more to see, but the kids were getting pretty tired by this stage so we decided to head back to the ferry and go back home.


We came back the way we'd come to avoid tramping over the inland hill crest again, but you can easily see what an obstacle this would have been to any shipping attempting to come near the area.

So a good little day out.

It's sobering to think how different the world was back when this place was doing its assigned job, but equally as sobering for me was seeing just how much plastic rubbish gets washed in from the sea. The southern coast was just an absolute mess of plastic, polystyrene and other things. The swampy area of the island itself had also been used as a dump by locals, so there were old fridges, wrecked vending machines, old hunks of rusty metal as well as plastic brought in by wind and tide.

The place was very popular with visitors, but for me it was a bit depressing to see what we're doing to our environment, and how little seems to be being done to clean it up.