Well, it can be done - even after all motivation seems to have been lost and all inspiration gone, something can for some mysterious reason click!  The quick pace was mainly due to the fact that all but 76 of these were already painted, and so most just needed touching up and bringing into line.

The basing is to allow 16 'average' units of 18 men for  Lost Battles. They will be matched for Civil War battles by Caesarians having 16 units of 'veteran' units of 12, with a few extras to top some up to 'average' size as needed for larger battles against a common foe. 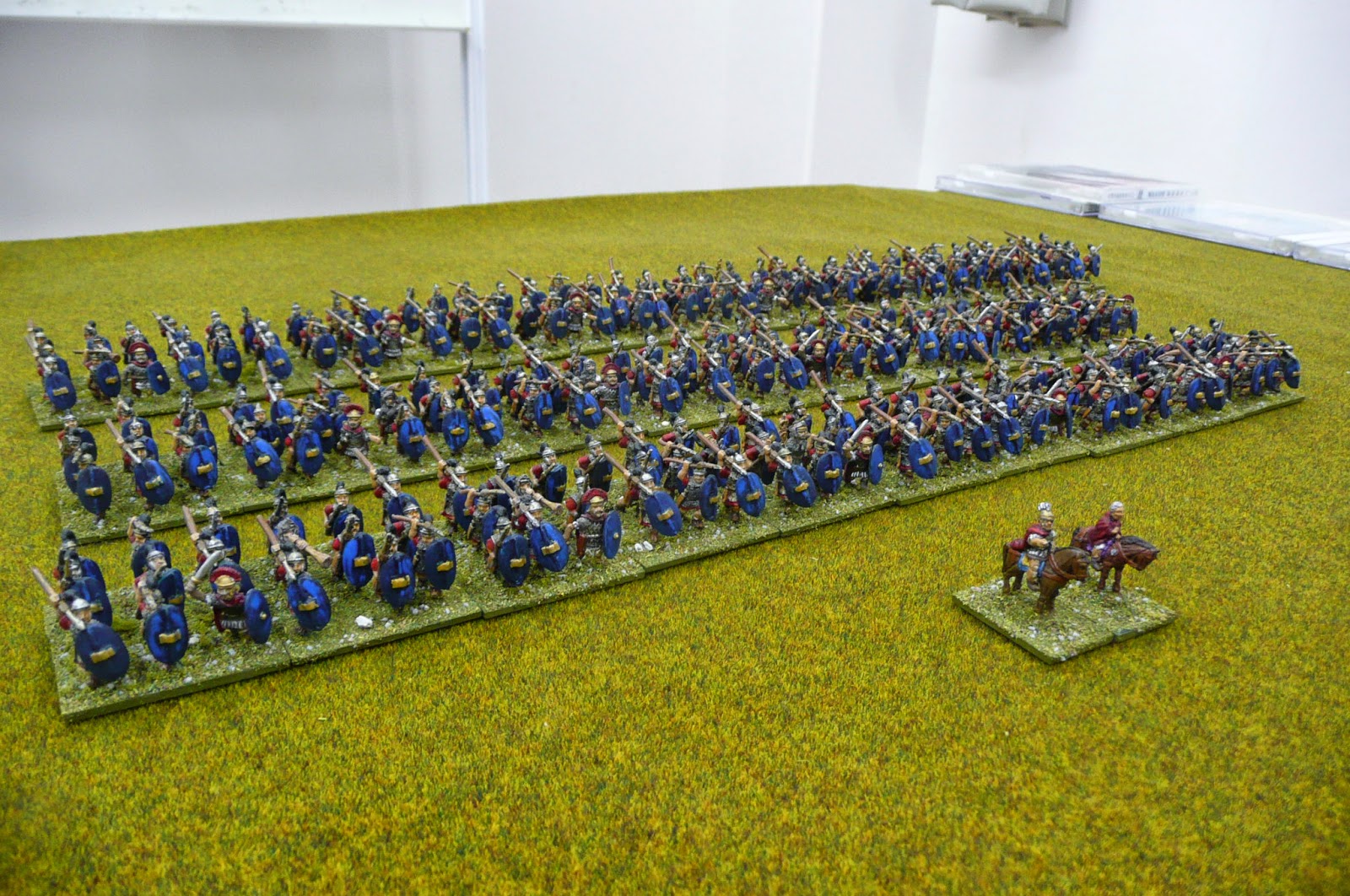 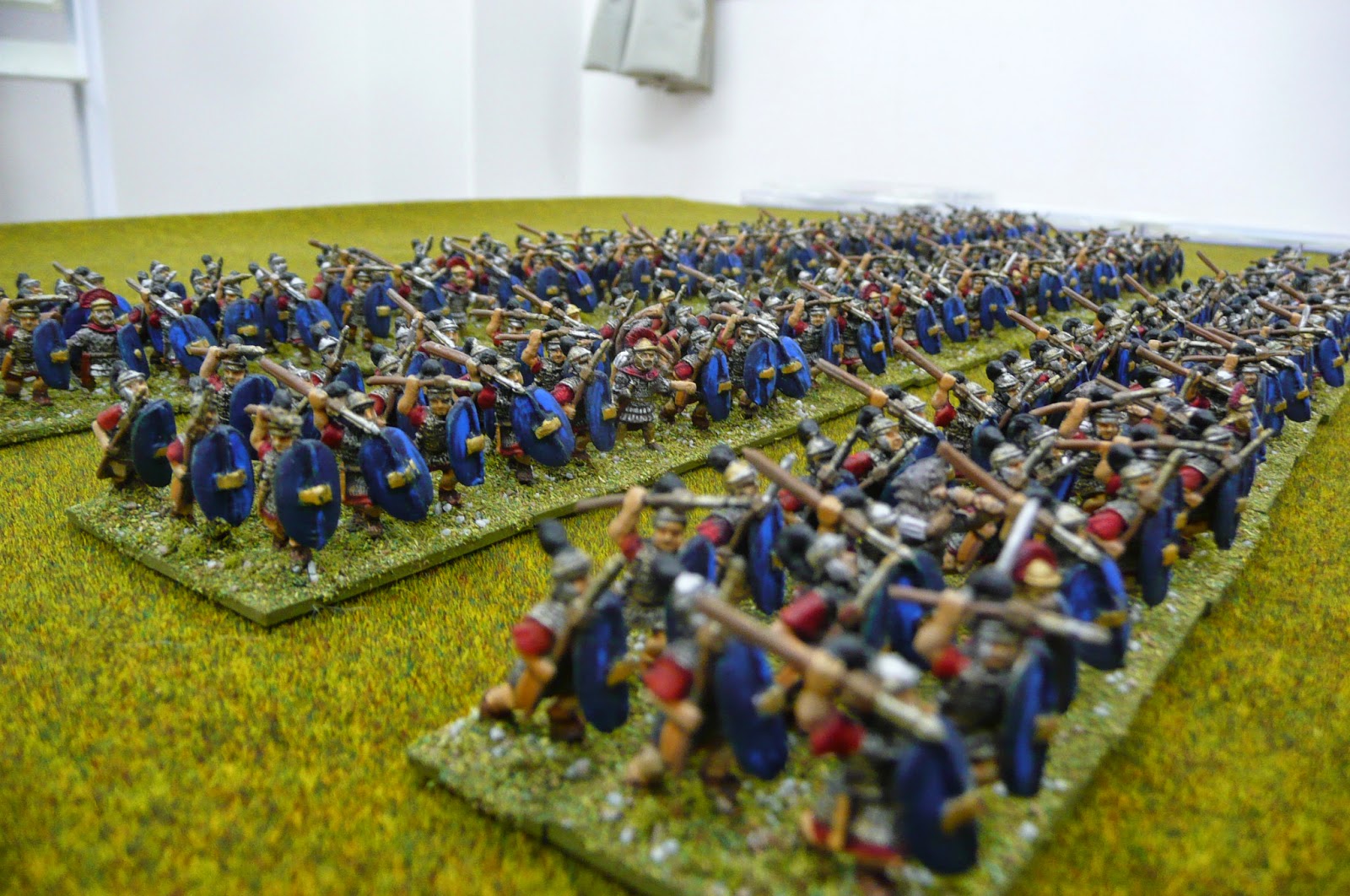 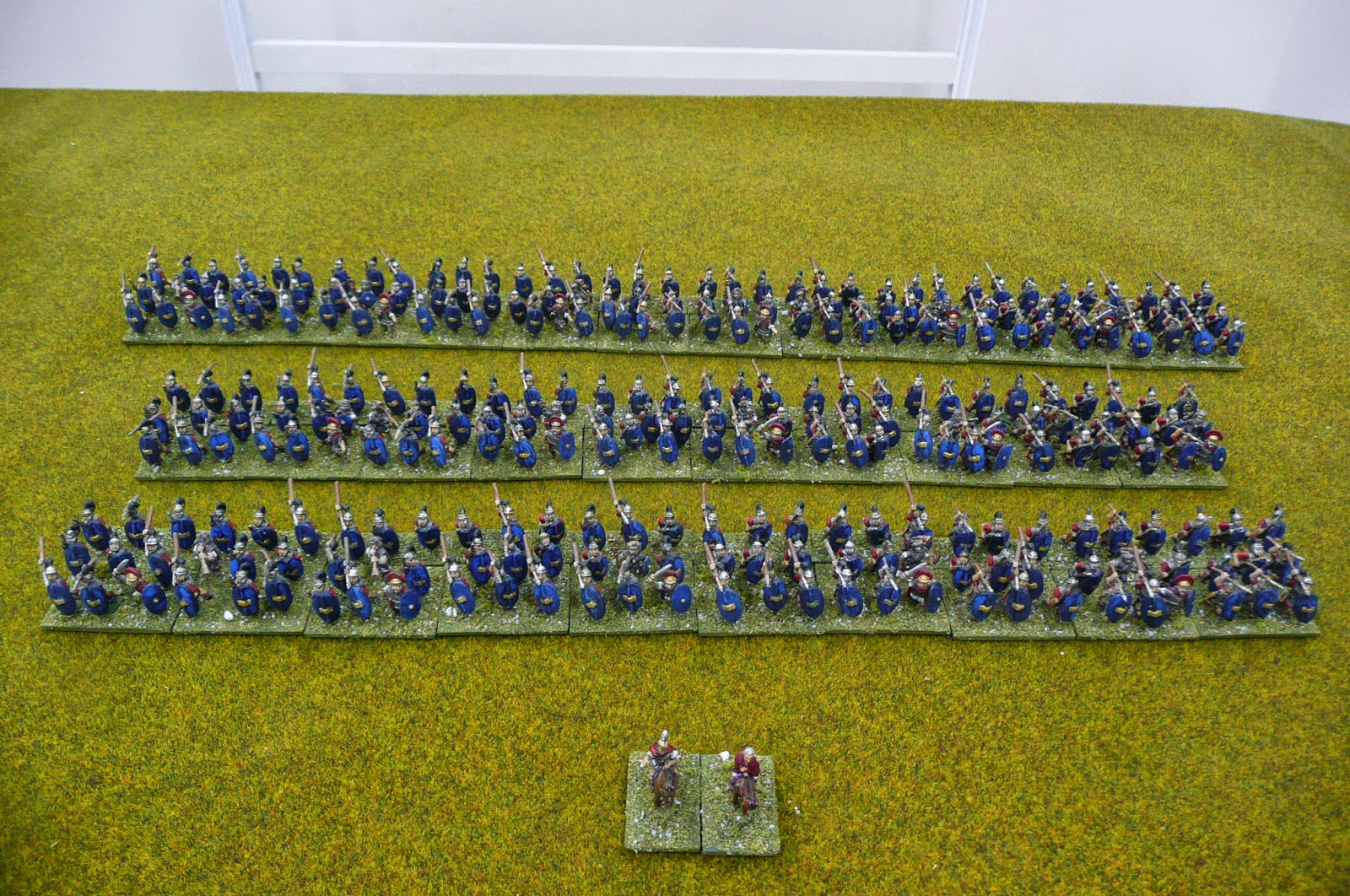 Nice to have another army done.

The cavalry will be drawn from my Gauls, Republican Romans, Numidians and, once they are painted, my Greek/Eastern types.

I'm going to be away for a month after this and don't expect to be able to blog much in that time, so will probably see you all in November at some stage.

Until then, cheers, and many thanks for all the encouragement you chaps have provided as I try to get back into the swing of things again.

Scutarii 2nd Edition (2014) is a set of wargames rules for ancient battles written by William (Bill) Butler and published by Hoplite Research. 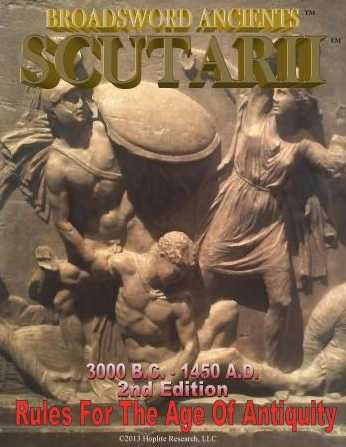 Disclaimer (or laying my cards on the table): I know Bill through the Lost Battles group, and when I heard that he had some rules coming out I offered to write up a battle report and post it here. Unfortunately, I have not yet had a chance to put on a battle, but I thought I would do a quick outline of the rules in the meantime. The copy of the rules I have is the final play-test version, so there may be some changes between this and the published version.

One turn is equivalent to about 15 minutes, and when using 40mm frontage bases one inch on the table equates to 50 paces. Each base usually represents around 500 men, though this may go as low as 300 or as high as 600.

The game can be played using all figure scales and caters for the standard basing systems.

Units can be in open or close order, and are classified by movement type (mounted, foot, naval), defense factor (based on armour), melee factor (based on weapons), missile factor (bow, sling or artillery), training (drilled, undrilled, fanatic and so on, rendered as a morale factor) and morale grade (elite, average, poor, Roman trained, which modify the melee factor).

A unit of triari might, for example, be classed as follows:

This means that the unit will move 6 inches, roll 4 d10 on attack, require enemy units to roll higher than 6 to score a hit on it, when fresh will successfully pass morale tests on a d10 score of 10 or less, can make formation changes, and will get a +1 on attack dice rolls.

The turn order is fairly standard, though melee is simultaneous and conducted up to twice per turn. Morale checks are taken before movement, so this becomes an important consideration in deciding who will move first.

In combat, units roll a number of d10s equal to their attack factor. Results higher than the target's defense factor cause a hit. As you might expect, there are modifiers that may apply here, either by adding or subtracting attack dice or by modifying the defense factor. Missile combat follows the same process but is less effective against some types of troops than others. For example, open order troops get a saving throw when hit.

When engaging multiple enemy units attack dice are apportioned as evenly as possible between those units.

Depending on the depth of the formation adopted, friendly units may be able to share out hits amongst troops behind the front line.

Roman units have certain advantages. They get a pila bonus when fighting other infantry, they are able to conduct line relief, and they do not get overlap bonuses against them. On the minus side, they may not distribute hits to the units behind.

Aside from usual outflanking tactics, key in-game tactics seems to be to get overlaps (ie, side support) against enemy units thereby allowing more dice to be brought to bear, and by exploiting disorganised units, which melee with only half their usual attack dice and cannot share out hits amongst other friendly units.

In defense, depth and mutually supporting units are rewarded.*

* Without playing the game it is difficult for me to properly assess combat, so I will need to return with more comments at a later time.

As units take hits or are put into stressful situations they will at various times be obliged to take morale tests against their morale factor. If the d10 score is higher than the morale factor, the test is failed. The morale factor is modified by various considerations such as the number of hits that the unit has taken, proximity to routers or, more positively, to a friendly commander.

A failed morale test causes a unit to become shaken or to rout immediately. If it fails a test while already shaken, the unit will certainly rout. Units do not recover from their shaken or routed state unless rallied by a general within 100 paces (20cms), and units may not recover hits, so a unit which has taken more hits than it has morale factor is destroyed.

In an interesting twist, units which score very low on their morale test can become enthusiastic. enthusiastic units, as the appellation suggests, have their blood up and are eager to get to grips to the enemy. This has both positive and negative aspects to it!

As mentioned, disorganised units are far less effective in combat than fresh units. Disorganisation occurs as a result of being on bad terrain, being shaken, evading, being contacted by terrifying enemy or not charging and not making contact.

Units recover from disorganisation by remaining stationary and 100 paces or more fromenemy units.

An army wins by driving the other from the field or, where the field is shared, by a points system.

Most units will be comprised of four bases in double rank* of one base, but options exist for using more bases in a unit. The game supports some formations, but in most cases these will be open order or closed order.

* Thanks to the rules author for pointing out my error.

The game includes a points system and a number of scenarios for a few well known battles such as Bibracte and Asculum. There are no army lists, but the author includes suggestions on how to convert army lists from other rules systems.

These rules are for people who already know a reasonable amount about ancient warfare and who want a toolkit for devising their own scenarios for casual or convention play. The rules give scenario designers flexibility, support multi-player games, and with experience are said to play to conclusion in around three hours.

The interactions seem to be in line with those of other rule sets, with victory going to the side that can best exploit its advantages to wear down the enemy and then induce a final, contagious rout. Reports on the yahoo group suggest that turn order can be crucial as the game enters its final stages, and being able to force the enemy to test morale before one's own tests are due can make a big difference to the outcome of closely-fought contests.

My impression is that the rules come from a do-it-yourself mentality; that players who share this mentality will enjoy the rules and be able to use them to suit their own style of game; that if you want competition games and cast-iron interpretations this will probably not be the ruleset for you.

Regarding rules completeness, the play-test copy implies rather than spells out a couple of key points, namely how a unit is destroyed (the answer is by taking more hits than its morale factor and thus being unable to rally) and whether the d10 is valued at 0-9 or 1-10 (the answer is 1-10).

Given this, it is possible that other rules questions will come up during play, but Bill responds quickly and supports the game as best he can through the yahoo group and by email, so I don't think that gaps in the rules or errata will be much of a problem.

The rules can be bought in hardcopy from Lulu for US$30. At this stage they are not available in an e-publishing format.

In the US you can also order Scutarii from On Military Matters.

Support can be found on the yahoo group Domus Scutarii, where Bill will happily answer any questions you might have.

I am keen to give these a go. All that I require is space, gaming motivation, an opponent and a duty free weekend!