Knowing that there is no chance of my managing to paint up all of the armies in all of the eras I would like to, I have been exploring an alternative approach. While I have a decent collection of ancients armies, I have nothing for the horse and musket era, and little chance of having time or spare money in the near future to be able to remedy that.

So what is a person to do?

Well, I've decided to experiment with craft products and boardgames.

I'm thinking of using wooden or cork sticks, circles and squares to represent various troop types, and either Battle Cry or Commands & Colors: Ancients boards and tiles for the battlefields.

To test whether the look would work I played the 1st Bull Run scenario from Battle Cry using these projected stand-ins. 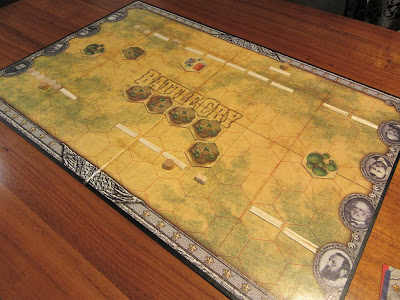 Just for my own reference, here is the key to what each of the pieces represents. 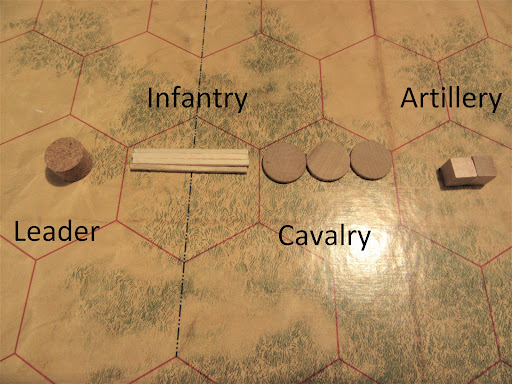 I don't think it looked too bad, and it was easy enough to differentiate between the two sides. Obviously, for games which have more troop types and in which troop quality is represented, I will need to make some changes, but my initial reaction is that it seems worth pursuing.

I have already picked up from Wargame Vault Sean Chick's first game in his Hollandspiele-published Horse and Musket series, and we'll see how it goes from there.

Email ThisBlogThis!Share to TwitterShare to FacebookShare to Pinterest
Labels: Alternatives to miniatures, Horse and Musket

Last week boardgamer Pat - my old mate in Japan - and I caught up for a game of the Avalon Hill classic, Midway. We played two sessions live over VASSAL, using messenger for the audio chat. We finished the game in about five hours all told.

It was most enjoyable. Not just for the game, but also to catch up with an old friend. Given I still feel like 1998 was only a couple of years ago, it had never really struck me that Pat and I have been gaming buddies for well over a decade now, but it's true.

For those who do not know Midway the game, it is a square-gridded board, hidden movement, 'battleships'-esque search mechanism, separate battleboard treat.

Pat and I had played this a few years ago with me as the Americans, so this time I took the Japanese. I was a bit of a nerd about it, and did some pre-planning. How was I going to go about the project of taking Midway and destroying the American carriers? I pondered.

All that pondering seemed it would count for nought though as Pat found my main force early on. It looked like it could be a long short game, but fortunately for me a bit of skullduggery threw Pat off the scent, and by several spots of luck, and an outlandishly good guess, next time we found each other I had superior numbers of aircraft to call on. With Enterprise and Hornet too far away to be of assistance, Yorktown was sent to the bottom. In the return strike Kaga was hit yet stayed afloat. Yorktown's surviving aviators, having nowhere left to land, were forced to ditch into the Pacific.

Japan now massed its forces and pressed on towards Midway itself. Pat hit the invasion force's transports (symbolised on-table by the Akagi) hard, but not before we had got a strike in on Midway, destroying its planes on the ground. In the scramble thereafter, Pat attempted to ready his returning planes to finish off the transports and prevent a successful invasion, but we were able to find him first, and a raid of all the planes we had in the theatre fell upon Enterprise and Hornet, catching them with aircraft on the flight decks.

Despite the heroic efforts of the US sailors and airmen, both carriers were sunk, and the Japanese won the day.

The final result may have appeared decisive, but we had a lot of very good luck. It could have gone either way, and the game was tense throughout.

It was a lot of fun to play with Pat again, and we're going to give it another go soon.