C&C:A was one of my favourite games in the oughties through to the birth of our second child. Following the arrival of young R, the lack of time to play C&C:A online over VASSAL meant that it was gradually displaced by Lost Battles, because Lost Battles is a superior solo experience.

You can certainly enjoy C&C:A solo however, so I set up a game the other night to reacquaint myself with the game. 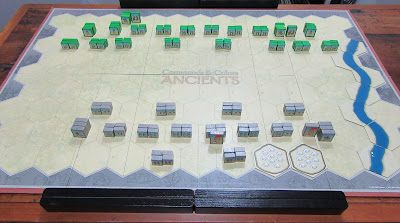 The scenario played was Arausio.The early play was all made by the Romans. A line command and double time card got them into contact early, and they quickly went out to a 2-0 lead. 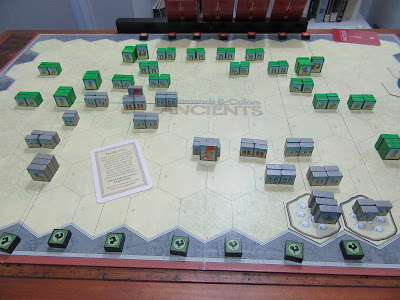 A darken the sky missile attack failed to halt the Roman attacks, and so it came down to local, small-scale counter-attacks to pull the initiative back. This continued for another six or seven turns. 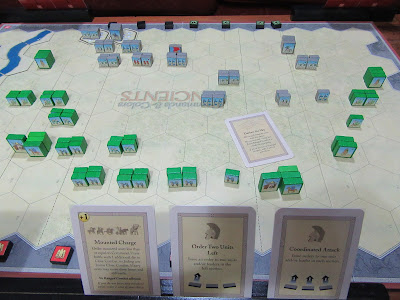 With two banners needed for victory Caepio and his accompanying unit took a chance, but it did not pay off. Left exposed, Caepio was then fallen upon by Boiorix and killed to win the day for the Germans, 7-6.
While still an enjoyable game, times have changed, and C&C:A is not usually going to be the first game I pull out when I want to play ancients. Its main strengths are:

1) Once learned, it's hard to forget

3) It has tonnes of scenarios

4) It is a nice game to look at and play

5) The card play system lends itself well to solo play, provided you take out the First Strike card

6) It is an excellent introduction to the era

Its main weaknesses are:

1) As much as I might have tried to convince myself otherwise (and I have!), it has deficiencies as a model of ancient warfare, and

2) It's just not quite as engaging solo as Lost Battles is.

That said, it's still a very fine game.

Email ThisBlogThis!Share to TwitterShare to FacebookShare to Pinterest
Labels: commands and colors