Good news: boxes from Japan containing (amongst other things) wargaming articles have arrived in Christchurch, and once these have satisfied the eagle eye of the Customs master, they will wend their way up through the Lewis Pass to Richmond, thence into storage until we move into our new address at the end of the month.

In the meantime I've been amusing myself by taking the family to the beach, reading books, and watching films.

1917, episodic and mythic in its telling, was one film I found slightly too long in the theatre, but that I have since had a lot of fun correlating to remembered scraps of Arthurian Romance, Herculean labour, and Medieval allegory.

The King I also enjoyed, as a re-imagining of another type of myth.

Moving to books, I can hardly believe I had never come across V.M Yeates's Winged Victory before. I saw it in two separate charity shops in the same week, and deciding that this must be a sign, bought it in the second. It certainly was a sign: it is brilliant. I haven't dreaded the end of a book as much as I dread the end of this one for a long time. There are some thirty pages to go, and I fear to read them. I had to write this post now just so that I could come back in the future and remember the feeling of not-having-quite-finished it. 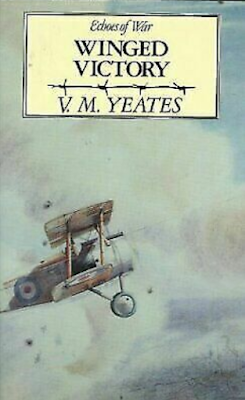 The descriptions of flight are astoundingly good, the metaphors are fresh and striking, and the way he captures character is masterly. When you think of literary depictions of drinking, you think of Hemingway and Fitzgerald, but the ones here are something else. A book to come back to again and again, I think.

Finally the beach: the young 'uns are absolutely loving having waves to play about in, sand that you can build castles out of, and a seaside not crowded with people and plastic rubbish. Their timidity around bugs and critters has also reduced remarkably. They're picking up sea creatures and sand dwellers with the best of them, swatting flies, and mentally preparing to crush white-tailed spiders. These may not seem like such big things, but it was only two months ago that they would yell if they encountered a moth!

Anyway, happy New Year all, and I hope that 2020 will be as good a year for readers as it possibly can be.