We had a very successful session of gaming at house Prufrock today, thanks to the fellows who turned up in spite of the congested social calendar at this time of year. At least one intrepid attendee spent a good part of the day dodging the after effects of an office bonenkai party, yet still dealt with the vicissitudes of on-table fortune with something close to aplomb. It was also - for the first time - a multi-generational affair: our young lad and some of the other offspring were able to get into some video gaming in one room while 'the adults' were messing about on the floor with plastic models in the other.

And thanks are also due to our wives or partners, without whose support and indulgence (to a greater or lesser degree!) of our penchant for play this kind of thing cannot go smoothly. I suppose, from my own dearly beloved's perspective, ordering early Saturday afternoon pizza for a bunch of wargamers is an order of magnitude less trying than getting a call at 3am asking her to come and peel a 'tired and emotional' husband off the footpath somewhere, but you can't be sure.*

But to the games: the first event was the game of What a Tanker that I've been going on about here on the blog interminably for quite some time. It went pretty well, and people picked up the rules fast. There is a jovial quality to the game, and no one took success too well or its opposite too badly.

The Allies got a bit beaten up, losing three tanks and almost a fourth, but they did put up a brave fight. Ironically, it was not the Panther G and Jagdpanzer IV who did most of the damage, but the lowly Panzer IV G, probably because everyone was so anxious to knock out the big cat that they ignored the hamster!

I didn't have much time to take photos, but here are a few shots:


But more fun than this was the after lunch entertainment, Luke's game of Zombicide. Now, I'm not a zombie guy - I've never seen the attraction in the genre - but this was a lot of fun. The six of us had to cooperate to achieve missions while evading or massacring the zombie hordes which were rising up to bar our way. We started out with nothing but fry pans and a pistol, but through assiduous ransacking of the town found what we needed to win. I enjoyed it far more than I ever thought I would, and I think I'll be looking for a copy. Thanks Luke!

Unfortunately, I didn't get any photos of this, but the other fellows did, so hopefully I can nab some of theirs and add them in later.

And there we have it: a really enjoyable day. Thanks to all who came along, and to all who made it possible.

*AHEM, any similarity here to real life persons or events is purely coincidental, and would have happened so long ago as to be almost not worth mentioning anymore anyway.

Surprisingly, 2018 has been by far the best year of painting I've yet had.

Somehow, towards the end of the year, and in place of my usual shiftlessness, a sort of  'just paint it' mentality developed. I think in part it was a reaction to the fact that I knew I was probably going to be moving country at some point, and so clearing out all those boxes of primed but unpainted figures became a necessity.

But it wasn't only that: the painting drive was also assisted by purchases of some mainly painted figure lots, which gave impetus to a couple of projects and made quickly putting together playable forces possible. Being able to imagine a game after a month's work is far preferable to being able to envisage several months of work and several months more work yet, so thanks and appreciation is due to the suppliers of those lots.

15mm painting motivation was also provided by a review owed, by some figures won in a competition on Jonathan's blog, and by general feelings of desperation and guilt.

The thing I'm most pleased about though is getting the 1/72 What a Tanker project off the ground and ready for a game. That one required starting from scratch in a new scale, learning new skills and techniques, and experimenting until things were at an acceptable level of quality. At first I was very unsure how to approach it all. I'd even planned to do it in 6mm, but while waiting for my Heroics and Ros purchases to arrive, I wandered into a newly opened toy store and seeing the models there I just thought 'man, you're in the best country in the world for 1/72 kit. Just do it!' And so I bought a stack of them and the decision was made.

There are some disappointments, however. I didn't get the Union figures finished to partner the 1/72 Confederates that were done, and I made no progress with 1/3000 naval.

On that note, I'd like to wish everyone all the best for the coming year, and hope that you all live well, that you keep your loved ones constantly apprised of your regard for them, and that you prosper greatly!

What a Tanker test run.

Set up a board and tested out the rules for What a Tanker tonight. I like them, and I think they are going to work well for the big group game planned for this weekend.

The rules are pretty simple but give players opportunities to make their own choices and put their own stamp on the game, which is just how I like it. Of course, the dice play a big part, but I think we can live with that! 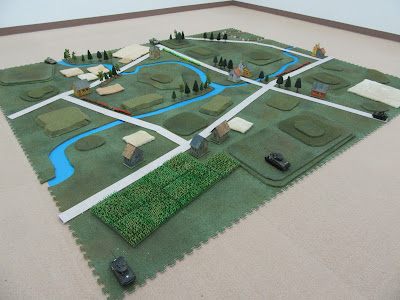 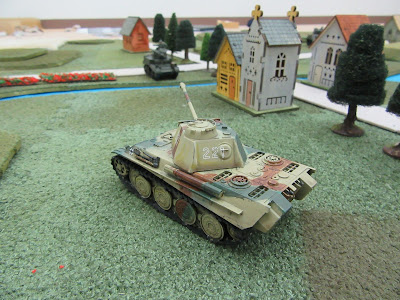 This was a five vehicle solo game, and although it would usually be a bit onerous to run five vehicles at once, it was easy to get into the swing of things and the situations that came up were quite interesting. I think the terrain will be good to play on, and I hope that people will enjoy the game.

I was also pleased to see that the vehicles looked the part on the table. All in all, a satisfying trial run!
Posted by Prufrock at 2:27 AM 12 comments:

Email ThisBlogThis!Share to TwitterShare to FacebookShare to Pinterest
Labels: What a Tanker

Well, it's now official: in February I'm upping sticks and heading back to New Zealand. It's a move that's been a couple of years in the making. Work, schooling, life, bureaucracy, illnesses, and some significant deaths on both sides of the family have pushed the timing back repeatedly. In fact, now that the kids are two years older than they were when the original plans were made, it's been a much harder decision to finally take, and I'm no longer quite as convinced as I was before that it's the right one.

But better men than me have said things to the effect that, when in doubt, you should take the braver option, so that's what I've done.

As it stands, I'm going back to find work and spend some time with my parents (the old man is not in the greatest health) and the rest of the family will follow when the moment is right.

The last few days then have seen books and games being glanced over with a cold eye, and either packed into boxes for shipping or loaded into shelves for 'redistribution'.  Then it will come to the lead. Even before I take the armies into account, the number of boxes I've been filling would make a man's eye water!

Further down the line there will also be the small matter of a blog re-brand - I can hardly call myself a wargamer in Japan if I don't live here.

So big changes are afoot, and this Christmas / New Year will be seasoned with a peppy mix of excitement and trepidation!
Posted by Prufrock at 5:22 PM 27 comments:

1/72 What a Tanker progress

We're finally getting somewhere with the What a Tanker Project. I'm glad there's been some movement, because first game is on the 29th, with seven players booked in, so no pressure!

There's quite a mix of models here. Hasegawa make up the bulk of them, but there are also Revell, Trumpeter and pre-painted Dragon models (which ones these are will probably be quite obvious, given that they are so much better painted than my own).

Sadly, despite youtube videos on how to do late-war German camo making it seem like a piece of cake, there is something of a glaring quality gap here between the idea and its plastic incarnations...

Anyhoo, we'll be right for a game, and that's the main thing.

There are still a few more things to touch up on these, but we're almost there.

I made a couple of 1/72 models in my youth but never painted them, so these are actually my first crack at doing armour in this scale. I can now begin to understand why people want to use airbrushes. 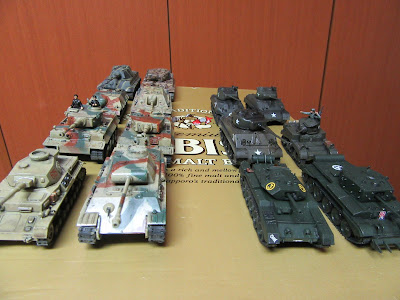 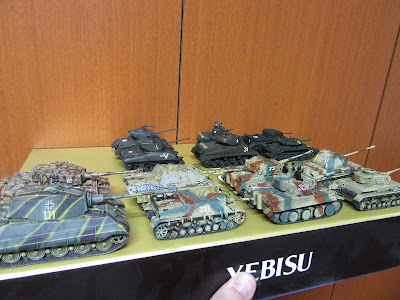 I've actually really enjoyed the change, but I have a lot to learn before I'll be able to churn out models at a standard I'm happy with.

So there are a few things to tidy up and then it's on to making some terrain.