Things have been busy here recently, but I'm very pleased to report that two excellent game days have been had this month.

First up, on Saturday 11th, I headed to Pat's place in Kobe for our long-delayed game of Edgehill using Ben Hull's Musket and Pike series.

While I don't have the ECW game that Edgehill comes from I do have two of the others, so I was looking forward to getting to know the system in the hope that I could then play a few games solo.

The M&P system clearly owes a debt to Berg and Herman's Great Battles of History series, most strikingly (for me) in the way that leaders and their commands are activated, but it is still its own game, with the wing orders, cavalry interception and general reaction rules giving the game plenty of character.

I should qualify my comments by saying that I have only a very passing familiarity with warfare from this era and am not therefore a sufficient authority to say how the games reflect the history, but you can be sure I will not allow such gross ignorance to prevent my commenting on the system itself!

It's quite fiddly in some areas - morale status, formation status and casualties all have to be kept track of separately; so too do the pistol shots used for cavalry - yet in other areas it is, by comparison, not fiddly enough. Musketeers, for example, are able to shoot in reaction any time a unit comes within range.  Although their chances of scoring a hit are only about 30% per volley, that they can potentially fire unanswered shots against up to four separate units seems to me to be an unrealistic anomaly.  That said, it appears to fit together well enough as a whole.

Under certain orders, rallying and recovery can only be done by army commanders, and as army commanders can be activated any time a formation is activated, we saw them  running around the board like chooks, and, in the case of King Charles, dying like chooks as well.  I think I would prefer to have rally and recovery included in a slightly more abstract way, but that's just personal preference and is not based upon a survey of the period...

The activation and orders systems work very well together.  There is a lot of 'game' packed into this aspect of the system, and I like the choices that it throws up.  The interception and reaction mechanisms mean that even the inactive player has important decisions to make, so there is constant tension and interaction between the two sides of the board.  The combat system allows antagonists to experiment with different types of tactics and it is clear that good play will be rewarded and poor play punished.  As I say, how those game choices relate to the historical choices I am not qualified to say, but it certainly makes for interesting game play in which timing plays a key role.

The battles flow surprisingly smoothly once the basic sub-systems are learned.  Our first game took a long time and a lot of flicking through the rulebook, but the second one went much faster and I think a third would have gone faster still.  Once people are sufficiently familiar with the system (I would say three to five plays in) I think it will become a game in which the rules take a back seat to the game play and in which players have the ability to be the authors of their own success or the arbiters of their own downfall. 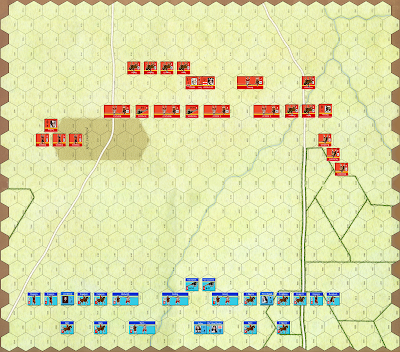 
In the first game I took Parliament while Pat took the Royalists.  There was fighting on both wings but the ability of my musketeers to get off a number of successful shots in reaction meant that the Royalist cavalry superiority came to nothing.  Seeing this, the heavy infantry of the Royalist centre concentrated on attacking the left, and while moving into position opened a gap in the line which Parliament was able to successfully infiltrate and exploit (thanks to some extremely favourable dice that allowed an order change and three activations in a row!) in a manner similar to Alexander at Gaugamela.  Despite scarcely creditable bravery from Charles and his immediate company, the king himself was eventually captured and we called time with a Parliamentarian victory.

In the second game we switched sides, and as the Royalists I concentrated on clearing the left in an attempt to outflank the formidable heavy infantry of the enemy.  Foolishly, I left Charles in an exposed position, and a  succession of poor activation rolls by myself matched by good ones from Pat saw Charles captured again, though I fear this time they just lopped off his head immediately.  The heavy infantry advanced, but Pat's skillful movement and interruption of the Royalist activations saw him lure my men into musket range and take a grievous toll on them before melee could be joined.  We had to call the game so that I could catch my train, but Pat probably had the upper hand on the field and had clearly won on points by virtue of his bold capture (and execution) of the royal person. 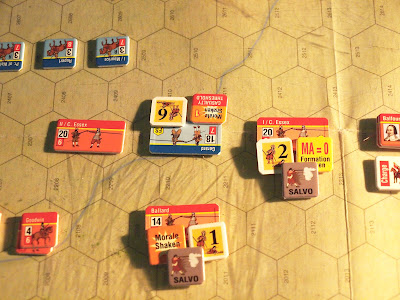 (Image courtesy of Pat, showing my Royalists in a tricky position after being led into the guns of Balfour and Essex)


It was a great day's gaming, and I am very keen to play some more of this fascinating system.

Many thanks to Pat for a fantastic day (and for yet another very good lunch!).