Luke and I managed to squeeze in an afternoon's gaming yesterday, with Americans and Soviets facing off circa 1979 using the Modern Spearhead rules.  It was a excellent day's play that saw plenty of ups and downs and a couple of personal morale checks.  It's going to be a few days before I have time to write up a report, but here's a shot of some of the early game action as a taster... 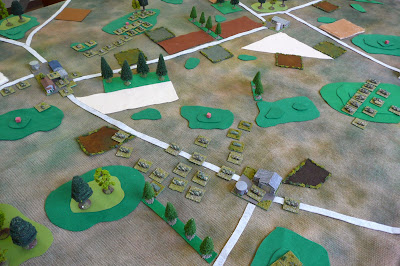 I've recently taken on a role with the Society of Ancients as their publicity manager.  The plan is that I will work in various ways to get more online exposure for the Society and its journal, Slingshot. Ideally, this will help to bring in new members and ensure that the Society remains in rude health for many years to come.

As part of this I've set up a Society facebook page which will be used to run competitions and post the odd bit of hobby or Society-related news. If you're on facebook and are interested in things ancient and medieval, please feel free to like the page, drop in there from time to time, and comment as you would like.

There should be some interesting things coming up!

Email ThisBlogThis!Share to TwitterShare to FacebookShare to Pinterest
Labels: Society of Ancients

An old friend and a wargame

This week I was lucky enough to have an old friend come to stay for a couple of days. He teaches history at an international school and in making a visit to Taiwan decided to tack on a quick trip to Japan.

He arrived on Tuesday and left this morning, so we spent a few days catching up with what's happened in the ten years since we last met, playing a bit of guitar, reminiscing about old school friends, feeding up on the local tucker and having the odd beer or ten.

It has been a good week for the soul.

At one point we were talking about our teaching experiences and I asked him if he ever used games in his classes. We talked about how they could be a good way to bring history to life for students and I explained that if I go into 'real' (as opposed to EFL) teaching later on, using games in the classroom would be something I'd like to explore.

The conversation moved on, but on his last night here I showed him the hobby room and we chatted a bit about games that could be useful for the classes he teaches. As one of the topics he covers is WWII, he asked if I had any games on that. Of the ones I had, Axis and Allies caught his eye. Although he'd not really played wargames before other than the odd thing on the computer, he was keen to give it a crack, and after the kids were asleep we set it up and got through about five turns before calling it a night.

He threw himself in at the deep end by taking Germany and Japan and while it took him a little time to see how the turn order fitted together, by the end he had that sorted out and had started to devise and implement some strategies.

It was a really enjoyable evening, and he loved the game. I'm not sure if Axis and Allies would be the best choice to use in a classroom setting, but it has the advantage of being entertaining and reasonably simple to learn while still giving a broad sense of how the various types of units interact and the importance of planning and manufacturing.

The main thing of course was that it was great to spend a bit of time with an old friend, but it's also nice to think that in years to come we might be able to enjoy the odd game together as well.

As I sign off, I will also note that it's always something of a relief to see one less unplayed game on the shelf!
Posted by Prufrock at 11:45 PM 4 comments:

Musings on projects: their start, middle, and end.

A few days ago, while reading one of fellow ancients enthusiast Trebian's updates on how his Classical Indian army is progressing, I professed admiration for a work ethic that could see figures bought, painted, based and recorded on the blog within the month, and contrasted my own feeble attempts at starting a project with the powerful record he exhibits on army completion.

He kindly offered to outline his method on getting projects underway and completed, and has been as good as his word, as this post shows.

While I read it with trepidation, his post actually makes me feel quite a lot better.  Not only is it full of useful tips (set aside family time being one that my wife might appreciate!), but it helped me to realise that I approach this whole caper from a different angle, this being that 'I started late and have a lot of catching up to do'.

I know very well that my biggest problem is the time lag between the buying of lead and the getting of it onto the painting table. Trebian's solution is to not buy until you complete your current project, but this would not work for me, for my wargaming mostly is one project: the Classical era Mediterranean!

What I have tended to do is keep an eye out for good deals on the figures I need to advance this crazy scheme, and have bought when the yen was strong and/or the price good, and (thank the Old Ones) when international shipping was more reasonable.  My Macedonians, Successors and Achaemenid Persians, for example, were picked up at between 20% and 60% of what I would be paying for them now, and that does not include the recently greatly increased shipping costs.

So I think I can safely say that (aside from getting sidetracked with moderns, Crossfire or ACW from time to time...) this approach has been a sensible one in financial terms, and I can also just about square it with Trebian's method.  As I said before, the Classical Med. is (technically...) one project, isn't it?

As far as painting goes, when I do paint I use the production line method.  I paint in large batches, and usually choose these to augment the armies that I already have.  I will do a whole consular army, or expand the Spanish, Gauls or Numidians of my Carthaginian army into a force in their own right, or perhaps enough Successor cavalry to allow me to do Magnesia, or some other similar mid-term target. So I do set myself goals; it's just that it takes a particular set of circumstances to force me to meet them.

I have to admit though that there are a number of things that will stop me picking up a paint brush and/or do get me out of rhythm, and I cannot match Trebian's discipline in this regard!

1) The seasons in Japan.  Some times of the year are just not good for painting, priming or dull-coating.  It's too humid, too hot, and the paint / spray doesn't like it.  Summer is basically a write-off, and it can take me a long time to get back on the horse once I fall off it.

2) Whims.  I have a lot of them, and they tend to be all or nothing.  I'll get back to playing the guitar, or exercising, or writing, or painting, or studying, or gaming, or following the (mis)fortunes of the NZ cricket team, or commenting on yahoo groups, but I can't seem to do much more than two at once.

3) Existential questions.  Sometimes I feel guilty about gaming.  I know it sounds a bit odd, but I do occasionally feel that I could be doing something more worthwhile, like writing more seriously, or actually getting good at Japanese, or building up some skills that will allow me to bring the family back to New Zealand one day.  These do cause the chain to drag at times.

4) Painting issues.  I'm afraid that I do fuss about a bit with my painting. Unfamiliar armies can give me a bit of a headache, and as I've had to redo a large number of figures because I was a very crappy painter when I started out I now like to try harder to get it right first time.  I will therefore mutter to myself about paint schemes, or research new techniques, and sometimes I just get nervous that I won't do the figures justice and so put things off.

All of these things mean that there are times that it's quite an effort to get started.  On the plus side, once I do get underway I usually get a lot done in a relatively short space of time, even if I start to go a bit nutty while doing so.

Moving on to project completion, I have to say that to this point there hasn't been too much of it in the Trebian sense.  I have nearly finished my 6mm Americans, but not quite; I have finished my Ancient Spanish, but even with these there are some command stands to do.  I guess I see progress in terms of steps (ah, I can now do Cannae, or Dertosa, or Zama, or Pydna, or Magnesia, or lose gloriously to Luke's '70s Czechs with my own models), rather than in 'army done' terms.

So, thanks to Trebian, I've sat down and thought it over, and while it may not be obvious, I actually feel a bit encouraged.  I may still take a long time to get things done and to get things done right, but on the whole I don't perhaps do as badly as I sometimes like to think!

JSTOR, the repository of academic journals on the web, now has a free limited membership option which allows you to keep up to three readable articles at once on a private 'shelf' for no charge.  The articles will be available to you for fourteen days after which you can replace them with others.

It's great news if you like to do a bit of research here and there.

Those who remember the classic Avalon Hill game Diplomacy may be interested in the free PDF fanzine "Diplomacy World" available here.

This edition (#128) includes articles on strategy and tactics, convention reports, feature articles and more besides.

I used to play a bit years ago and after a quick browse through this it makes me want to play again.  Time to sit down with a cup of tea, I think!
Posted by Prufrock at 10:41 AM 1 comment: