Phil Sabin's new book Simulating War arrived yesterday.  I've been browsing through it and thought I'd share some initial thoughts. 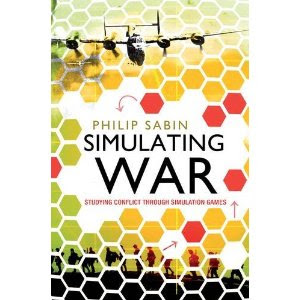 My first impressions are that it consciously positions itself within the tradition of wargaming 'overview' books such as those of Featherstone, Grant, Young, Gush and others, all of which act as introductions to the history and play of figure wargames.  In keeping with that tradition it also includes rules, information on suppliers, examples of games in play, tips on how to make up your own games/rules as well as discussion of various aspects of design philosophy.

Where it departs from the books previously mentioned is in its focus on board rather than figure wargaming (in this regard it is a direct descendant of the Dunnigan and Palmer books) and in its argument for the merit and validity of wargames as educational tools.

In Simulating War, Phil Sabin takes on the role of apologist.  If that seems a little odd or unnecessary to the converted, we must remember that while the average hobby gamer holds the value of wargames to be self-evident, the larger audience - especially the academics and military professionals within it - does not feel the same way!

At any rate, for those of us who like to tinker with rules or have ideas for games of our own, this book will be a very useful and informative guide.

As I say, I have only read a couple of the chapters from start to finish, but from what I have seen so far it seems that the torch lit and held by the giants of the past such as Wells, Featherstone, Grant, Young, Gush et al  has been taken up again, and it would be difficult to imagine a more worthy successor than Phil Sabin.

These are exciting times to be a wargamer!
Posted by Prufrock at 9:57 AM