A Campaign: The Iberian Adventures of Gnaeus Cornelius Scipio Calvus.

In 218 BC, with the war against Carthage just begun, the brothers Publius and Gnaeus Scipio found Hannibal had bypassed their position on the Rhone and headed inland for Gallia Cisalpina via a certain mountainous path.    As consul, Publius directed his elder brother Gnaeus to proceed to Spain with the bulk of their forces while he himself returned to see to the defence of Italy.

Thus Gnaeus, in command of around 2000 horse, 22,000 foot and 60 quinquiremes, made for Emporiae, and commenced working his way down the coast securing a base for future operations.

Hanno, the Carthaginian commander in charge of the area north of the Ebro, made haste to confront Gnaeus before the latter could enlist the aid of too many of the natives.  With only 10,000 foot and 1000 horse under his command, Hanno did not have much in the way of men with him, and despite an apparent enthusiasm for a fight was soundly defeated at Cissa.  He had had assistance coming in the form of Hasdrubal with 8000 foot and 1000 mounted, but Hasdrubal was too late: Hanno's army had been destroyed by the time he arrived.


Having researched this episode recently in an attempt to put together a Lost Battles' scenario for Cissa, it struck me that we have here an intriguing 'what-if':  suppose Hanno had waited for Hasdrubal to join him before he came to grips with Scipio; how might this have affected the battle for Iberia, and the Second Punic War at large?

As I've been looking to do a series of linked encounters to give some context to Lost Battles solo games, this seemed a perfect opportunity to start an alternative history campaign that has Hanno and Hasdrubal doing just that: joining forces prior to the battle of Cissa, meeting Scipio as a combined force, and forcing him to do a bit of hard fighting.

The campaign will take the form of a series of battles - interspersed with some other events I will dice for as I go along - and will follow Gnaeus' attempt to establish the Roman presence in Spain.

Below is a stylized map of the areas in play: orange shows Roman control; yellow shows Carthaginian control; white shows no control. 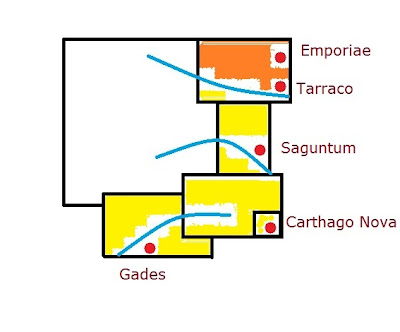