A Victory Lost with Andrea, Turn 5 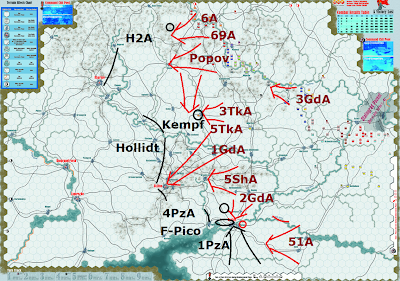 Carrying on from the earlier report (which can be found here) the current situation sees the Germans trying to do three things at once: keep a supply line open through Rostov for 1st Panzer Army's arrival from the south; set up a defensive line in the north; and prevent the fall of Stalino.

The first objective is achieved by virtue of a limited counterattack north of Rostov which holds off the 2nd Guards Army, but further north 5th Shock Army and 1st Guard army isolate and eliminate two divisions.

In the far north 6th Army and Popov's tank force destroy resistance east of Valuyki and take the city itself, but cannot dislodge the 268th infantry division from its position covering the road to Belgorod and thence Kharkov.  The infantry in this sector have, through their sacrifices, bought enough time for Kharkhov to be reinforced and have kept the armies in the north from advancing as quickly as the Soviet command would have wished.

Kempf is unable to extricate himself from a precarious position around Starobilsk, where the 7th and 19th Panzer divisions find themselves subject to a series of attacks by 3rd and 5th Tank Armies resulting in 7th Panzer being destroyed and 19th Panzer forced to fall back on the infantry support. To compound the difficulties, elements of Popov's command turn south from Valuyki to put Kempf's three remaining divisions out of supply.

Towards the end of the first week of February, 13th Tank liberates Stalino from German control, but strong German reinforcements arrive in preparation for a counter attack.

The Germans will have six chits in the cup next turn - two of which will be the magic Manstein chits - but it will be a difficult task to hold off the Soviets long enough to get 1st Panzer Army and Kempf's men out of danger while still be able to form a front capable of holding Kharkov and recapturing Stalino.

Below is a screenshot of the map showing units in place. 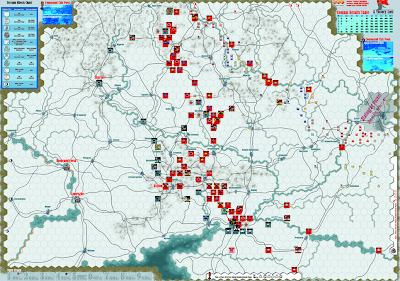