Paraitacene took place in 316 BC. between the forces of Eumenes and Antigonus One-Eyed.  Our source for the battle is Diodorus (XIX. 27-32), whose account can be found online.

According to Diodorus, Antigonus had 28,000 heavy infantry, 8500 horse (or 10-11,000 horse when using the numbers given for each individual contingent) and 65 elephants.  Phil Sabin's order of battle in Lost Battles includes an additional 10,000 light infantry and uses the higher cavalry total. Translated into Lost Battles terms, Antigonus' army is made up of the following units:

Diodorus gives Eumenes a force of 35,000 infantry, 6,100 cavalry and 114 elephants.  Again, the numbers are different when the individual contingents are added together.  Phil Sabin's order of battle is as follows:

Both Antigonus and Eumenes are classed as inspired leaders, and are attached to their veteran guard cavalry units.

The battlefield is a flat plane but for hills in an inverted L shape along Antigonus' right flank, with the short arm of the L extending into his right centre zone.

The deployment saw both Eumenes and Antigonus stack their right, with Eumenes refusing his left, wanting to use elephants there to blunt Antigonus' approach.  Eumenes has superior quality in his phalanx, but is inferior in numbers both in real and game terms, with his seven heavy infantry units matched against the eight of Antigonus.  Antigonus has eight cavalry units versus the five of Eumenes, so it is only in light infantry and elephants that Eumenes holds a pure numbers advantage.

So, to the refight!

This is a shot from Antigonus' left showing the original deployments of the two armies.  Antigonus' advanced right can be seen in the distance, abutting the hills.  Eumenes' veteran phalangites have advanced two zones to secure the centre, along with the light infantry and several of the elephants. 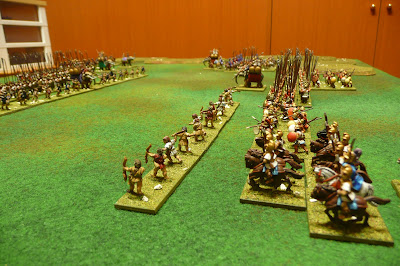 To give a clearer picture of the deployment, here is a scan of the set up from the Lost Battles scenario.  Note that I do not represent the zones on table - I judge the zones by eye and by the width of the stands.  Each zone is 24cm (six stands) across and 20 cm (five stands) deep. 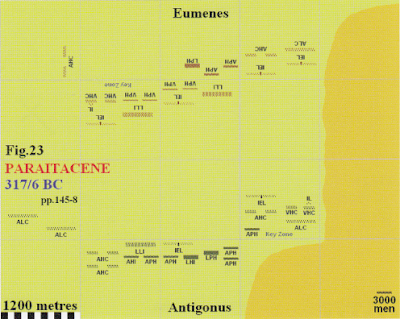 With the first move, Eumenes elects to move his phalangites forward into the Antigonid half of the battlefield, still keeping his left refused. 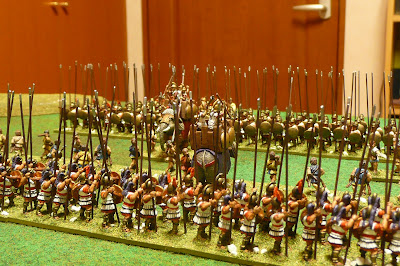 He leaves the unit of levy phalangites to protect his key zone and maintain a link to the left. To insure swift success on his right, he double moves the light cavalry from the left and a unit of veterans from Eumenes' command to reinforce the cavalry there.

Antigonus responds by advancing his right, also leaving a unit of phalangites to guard his key zone and outflank the advancing Eumenids.

Shot from Eumenes' left - with Antigonus and his men in the foreground - showing the stepped deployment of the phalanxes. 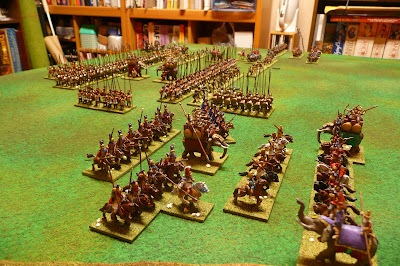 Shot of the armies at the completion of turn two, looking from Eumenes' right. 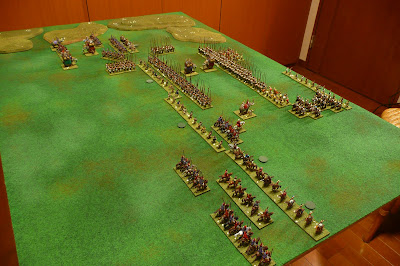 The fighting in the central zones is bitter, with both sides scoring hits on turns three and four.  The Eumenids have the better of it in their right centre and flank zone, while the Antigonid success mirrors this exactly.

The Silver Shields in line. 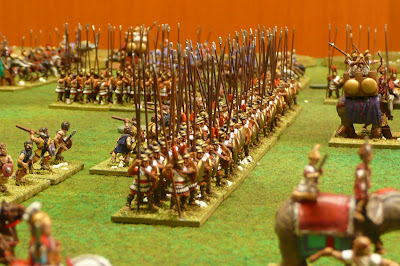 Antigonus begins to exert some pressure... 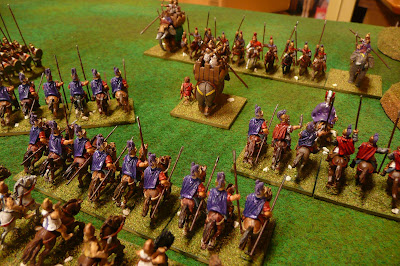 The lines engaged early on in the fight, with Eumenes in the foreground brandishing his sword.  The Antigonid elephants are having rather more success than their counterparts. 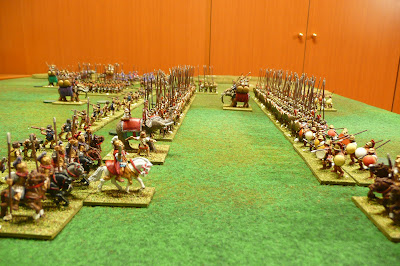 The first breakthrough occurs on Eumenes' right.  The light cavalry give way, and the Antigonid left centre is now all spent.

View from the extreme right of Eumenes' battle line. 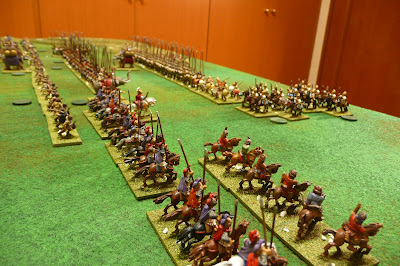 Meanwhile, on the other side of the field Antigonus is having even more success against the elephants.  Three hits are inflicted by this zone in turn three, leaving all units in the opposing flank zone spent.

Antigonus' zone on the charge. 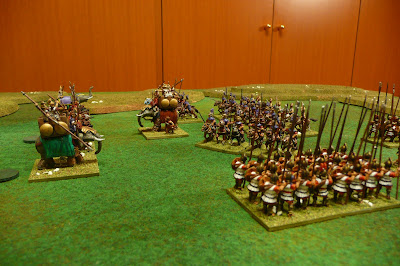 His phalanx is also making a good go of it.  Eumenes' centre is getting hit from two sides and is not coping well.

The hits are mounting on Eumenes' centre. 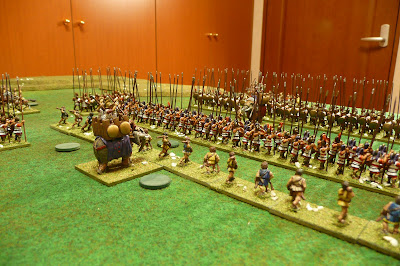 The Antigonid phalanx doing the business. 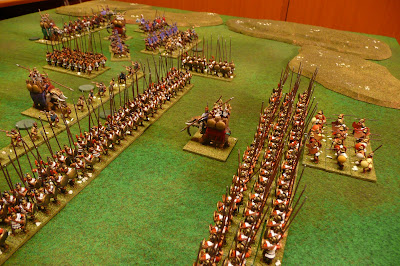 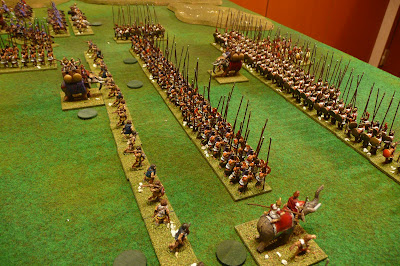 By the end of the fourth turn the Eumenid phalanx in the centre zone is entirely spent; nearby, the Antigonid left phalanx is also entirely spent.  The question is, which will break first? 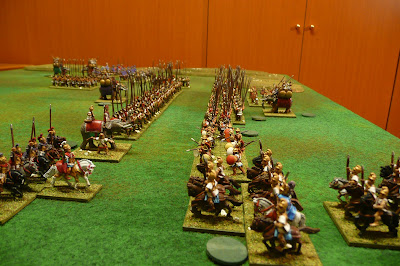 Antigonus has also all but broken the resistance on Eumenes' left, with just a solitary elephant unit remaining, and that spent.

A last-ditch stand on the left as Antigonus bears down on the last elephant unit. 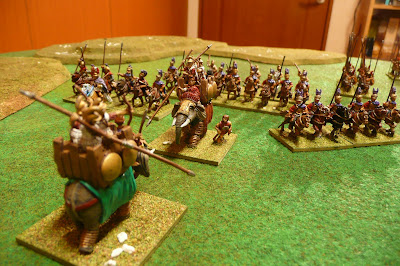 Seeing the danger on the left and in the centre, Eumenes redeploys this victorious cavalry from his right to shore up his centre. 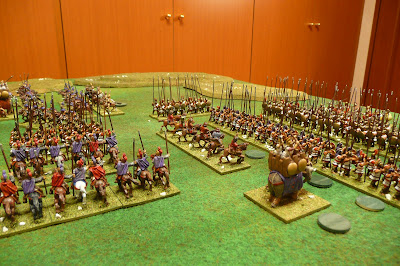 He also fluffs a royal chance to rout the Antigonid left.  His charge shatters one unit, but fails to do any more damage.  It is a critical moment in the battle, because... 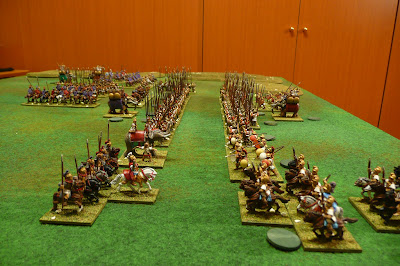 Antigonus' men make no mistake.  The flanking phalangites shatter the first of the Eumenid phalangites, and these take the levy light infantry with them in the rout.  The reinforcing light cavalry are also hit, so things are as bad as they ever were, and there are now no remaining reserves to throw into the zone.

The rot sets in.  View from behind the Antigonid flanking phalanx. 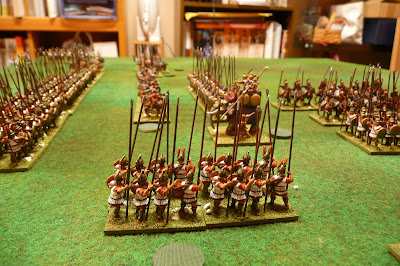 Antigonus then shatters the remaining elephant unit opposing his right. 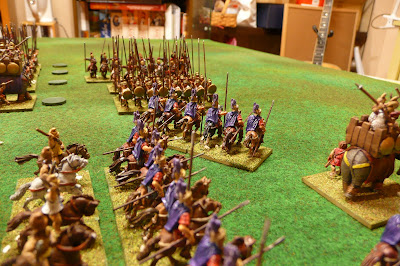 Eumenes is then hit as he attempts a rally.  He survives the scrape, but may not rally for the rest of the game and must also spend a turn to recover.  Despite this setback, the men in his zone are able to clear the enemy from their front, though again the centre fails to do much damage.

Eumenes a little dazed and confused. 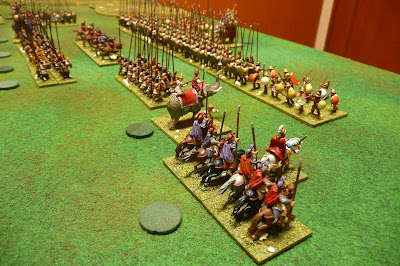 In his turn, Antigonus makes a crucial attack: three attacks see four hits scored and the entire zone routs.  The reinforcements have availed Eumenes nothing!

Antigonas launches the killer blow. He clears this zone in just one turn! 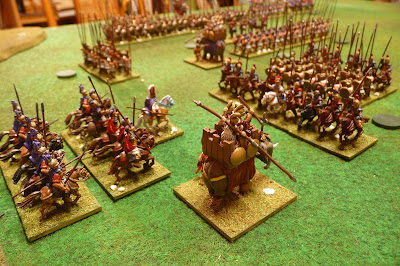 Now surrounded, the next hit on Eumenes centre has the zone at -2 for morale, and they all rout apart from two units of veterans, one of whom is promptly shattered to complete the victory for Antigonus.

The centre in a somewhat forlorn state... 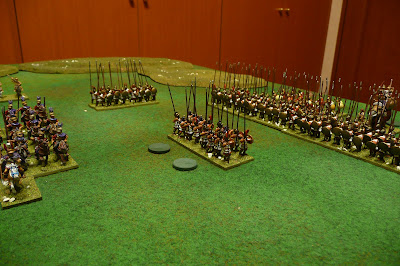 The view from Eumenes' zone in the final stages.  Antigonus can be seen behind the Eumenid centre. 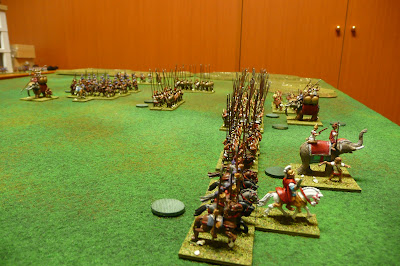 The final morale roll is a 1, and the game is over!

Antigonus in his triumph! 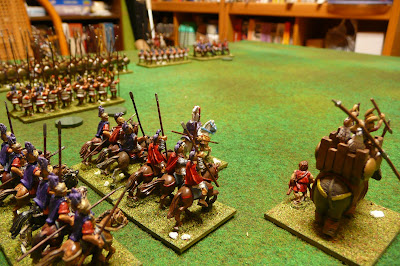 Casualties in the makeshift field hospital... 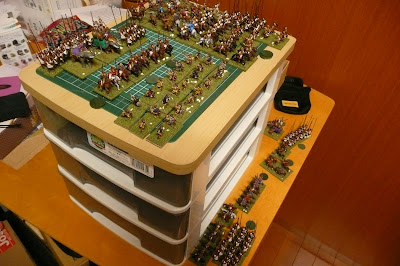 So all that was left to do was tally the points.  This is how they worked out:

With a victory point advantage of 60, Paraitacene is a major victory for Antigonus.

This was yet another interesting battle using Lost Battles, and when time permits I'll do a post with some thoughts on points that arose.