Following on from my last post on a solo refight of Paraitacene using Lost Battles, I wanted to note down a few points that arose, and do so while those points are still fresh in the memory...

To that end, here is a screenshot of the historical deployment taken from John Acar's VASSAL module. Eumenes, who has the first move, is shown on top of the screen, and has his units designated in red. 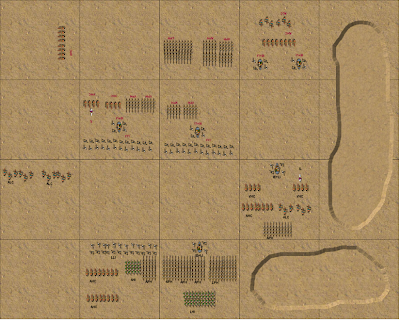 As it stands Eumenes is outmatched on both flanks, so he is confronted with an important decision immediately - does he shore up one flank or both? If so, how?

One possibility is to use some of the central phalangite reserve to support the weak left.  This is not ideal, however.  If the left stays in place it will take two turns for the phalangites to get into position (one turn to about face; a second turn to double move into the zone and turn to match the facings with the current inhabitants). If the left advances, it will still take two turns to reach them, but they will also have to weather the first attack from Antigonus, which may make the sending of reinforcements pointless anyway.

Another possibility is to use Eumenes and his two units of veteran heavy cavalry to reinforce the extreme right flank, hoping thereby to expedite the destruction of the light cavalry there and then turn Antigonus' left.  The problem with this is that is weakens the right centre zone, and Antigonus can conceivably withhold his own left centre and send cavalry reinforcements to support the light cavalry.

A third possibility is to weaken the left to strengthen the right, and this is the option that Eumenes took in this refight, mainly because he rolled a 6 for commands and had plenty of them to play with.  He thus double moved the average light cavalry (ALC) from his left to join the advancing average heavy cavalry on the right, while also sending in one unit of veteran heavy cavalry from Eumenes' zone.  At the same time he advanced his central (infantry-heavy) zones into contact.

This is what the move looked like in its entirety: 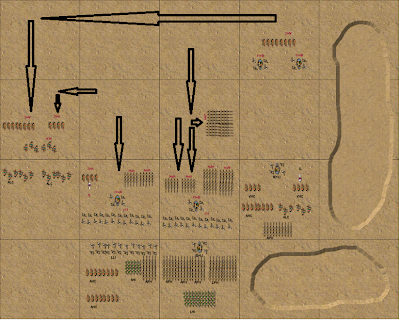 Antigonus' response was to advance on his right, leaving behind the unit of average phalangites to turn towards and outflank Eumenes' central phalanx, as is shown below. 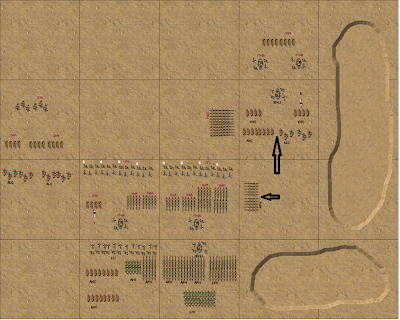 ﻿
The positions remained like this until turn four, at which time Eumenes' forces broke through on the right, and had also hit all of the units in the Antigonid left centre.  Less happily from the Eumenid perspective, their own centre and left were likewise spent, as is shown below: 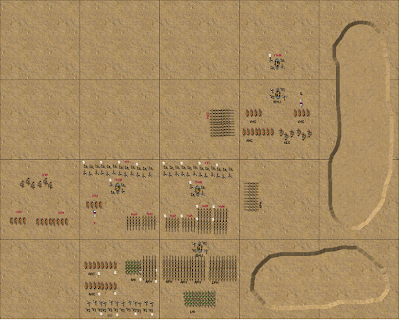 With it now his turn, Eumenes rolled a 1 for command.  This gave him seven commands for the turn, which was not very many to deal with the tricky position he was in.   When the units of one's centre are all spent and about to commence shattering, it is usual in Lost Battles to at this time think about invoking the free about turn rule to evacuate the central zone and fall back; but this move is not possible when (as in this case) the zone in question has enemy to its flank.   The centre therefore has no option but to stand in place.

That is not the end of Eumenes' troubles though: Antigonus will likely break through on the left later this turn, and will then be free to send his fast-moving cavalry behind the Eumenid lines, resulting in morale boosts for his men and morale penalties for Eumenes'.

Of course, a powerful attack on the right could possibly see the Antigonid cause stutter, but the centre is very strong and with all units fresh is not very susceptible to rout.

Eumenes elected to send his victorious right to try and effect a rescue.  He reinforced the central phalanx with the fresh light cavalry for 1 command; double moved the veteran cavalry to join the levy phalangites (1 command); double moved the average cavalry to the same zone (2 commands); attacked in the centre (2 commands), causing two hits; attacked with the elephant, causing no hits (1 command); and used Eumenes' command exemptions to attack from his own zone, causing one hit and shattering the lead unit of heavy cavalry.

This is how it looked: 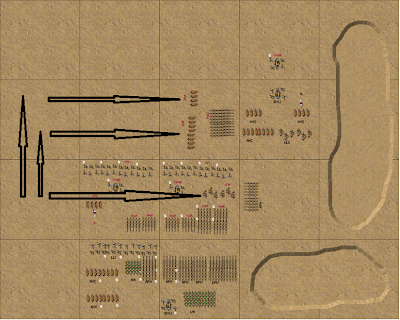 This was the highwatermark of Eumenes' battle.  As it turned out, Antigonus won the game over the next two turns, disposing neatly of all the reinforcing units to take the victory.

There were/are three critical issues for Eumenes to deal with in this battle:

The biggest mistake Eumenes made here was probably that of allowing his central phalanx to be flanked from the beginning.  This reduced the offensive power of the phalanx (cut out a beneficial combat modifier) and made it too command-costly an exercise to withdraw from that zone when the pressure came on.

There is plenty of room for musing on what the better options might have been at each stage of the battle...
Posted by Prufrock at 1:00 AM