I'm a couple of days into the painting of my last batch of Strategia e Tattica Romans.  There are 64 infantry and 19 cavalry underway, with these figures making up the numbers for the remainder of the allied legion and a 'blue shield' cavalry contingent.

Once these are done there will be enough figures for two consular armies at 48 figures per legion/ala (16 hastati and 16 principes, 8 triarii and 8 velites) or for one consular army at 96 figures per legion.  There will also be 27 'red shield' cavalry, 18 'blue shield' cavalry and 21 Minifigs chaps that can be pressed into service as needed.  With four command stands and 3 mounted commanders, I hope that this will have the Romans sorted for some time to come!

Here are some of the partially-completed principes, with triarii in the background. 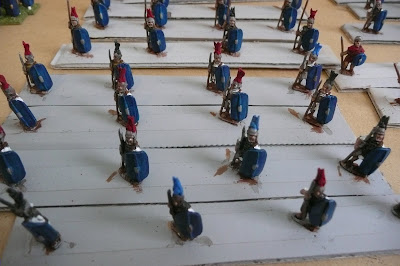 These were undercoated gray and given a dark brown wash (mixture of Future, Tamiya black and brown).  Next was a dark flesh undercoat, mixing flesh with red brown.  Shield backs and pilum shafts were then painted wood brown and the mail given a coating of Tamiya smoke with a touch of black dribbled in.  The tunics were blocked in in white; the hair done; the straps and belts done in burnt umber; the shoes/sandals done in red brown.  Following that the helmet crests were hit with red, blue or black and the shield faces painted a darker blue.  The flesh has been given a second coat, so it's time to move onto the final stages.

Next up will be the greaves, helmets and shield bosses in yellow bronze.  The scabbards will be done in a red brown after that.  Then will come a touch up for the pilum shafts and shield backs, a highlight for the tunics, highlights for the helmet crests (the 'pop' feature on these figures) and silver for the pilum heads.  The velites will have wolf skins done, then all figures will have their bases painted grass green and the last flesh highlight added.  To seal the job a coat of my own 'dip' will be applied, followed by two coats of Future and a spray of matt varnish.

After that it will be time to base them, and get a game underway!

They don't look like much now, but given another few days they will hopefully be in a more presentable condition... 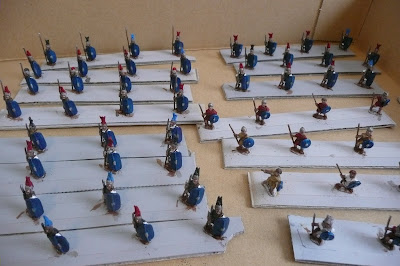