Well, our long-awaited, oft-delayed game day finally happened today.  Luke brought down some Dark Age figures and we had a crack at a few new sets of rules.

First up was Dux Bellorum. Luke took the Romano Brits with their cavalry while I took the Saxons with their, well, lack of it.  [Edit - see Luke's account of the day here]

The table was fairly open, with a bit of wood on my right and a hill for Luke's shieldwall (low aggression but hard to hit) to sit on. As my men were warriors (high aggression and cohesion but not so great in the protection stakes) the plan was to advance forward in two groups with a flank guard on each respective end and we'd see what happened

It started off reasonably well as we drove off one lot of cavalry on our left, but wasn't so flash on the right, where we got the worst of the opening exchanges as the noble Romano-Brit cavalry ploughed into our lower quality types. We did sneak our flack guard around the side, but it didn't seem to help much.

We were starting to take some casualties from Luke's lone unit of bow, so the call came to rush the hill using our quality and numbers to win there while we held off the horse on our right as long as we could.

Our attack on the centre and left met with good initial success, destroying the flank guard horse and the bows in the first two turns.  It was harder going against the shieldwall on the hill, but our numbers would tell, it was to be hoped...

At this stage there was some defeatest talk from the Romano-Brit side of the table, but I would hear none of it, sagely reminding our guest that I had form when it came to losing the unloseable.

Our right held out just long enough - even killing off a unit of horse - for us to get into superb position against the spears on the hill.

One more hit on the spear would force a bravery test for the Roman remnants and swing the game our way.  Sadly for us, a champion arose, and the spearmen resisted all 11 of our attacks.  On their own strikes, the spearmen then hit with 2 out of their 3 and pushed us back instead.

Their cavalry then charged home with zest on the other flank, destroying two units in one turn and forcing the decisive bravery test for a famous Romano-Brit victory!


It was a thoroughly enjoyable game. It's not often I find myself making battle noises, but I'm afraid I was guilty of it in this game. It was so good I didn't even mind losing the (apparently) unloseable yet again!

Second game was Shipwreck. Unfortunately, we didn't get very far because we seemed to be on different wavelengths from the designer and just couldn't make sense of apparent discrepancies. After about 90 minutes we decided we'd try something else. 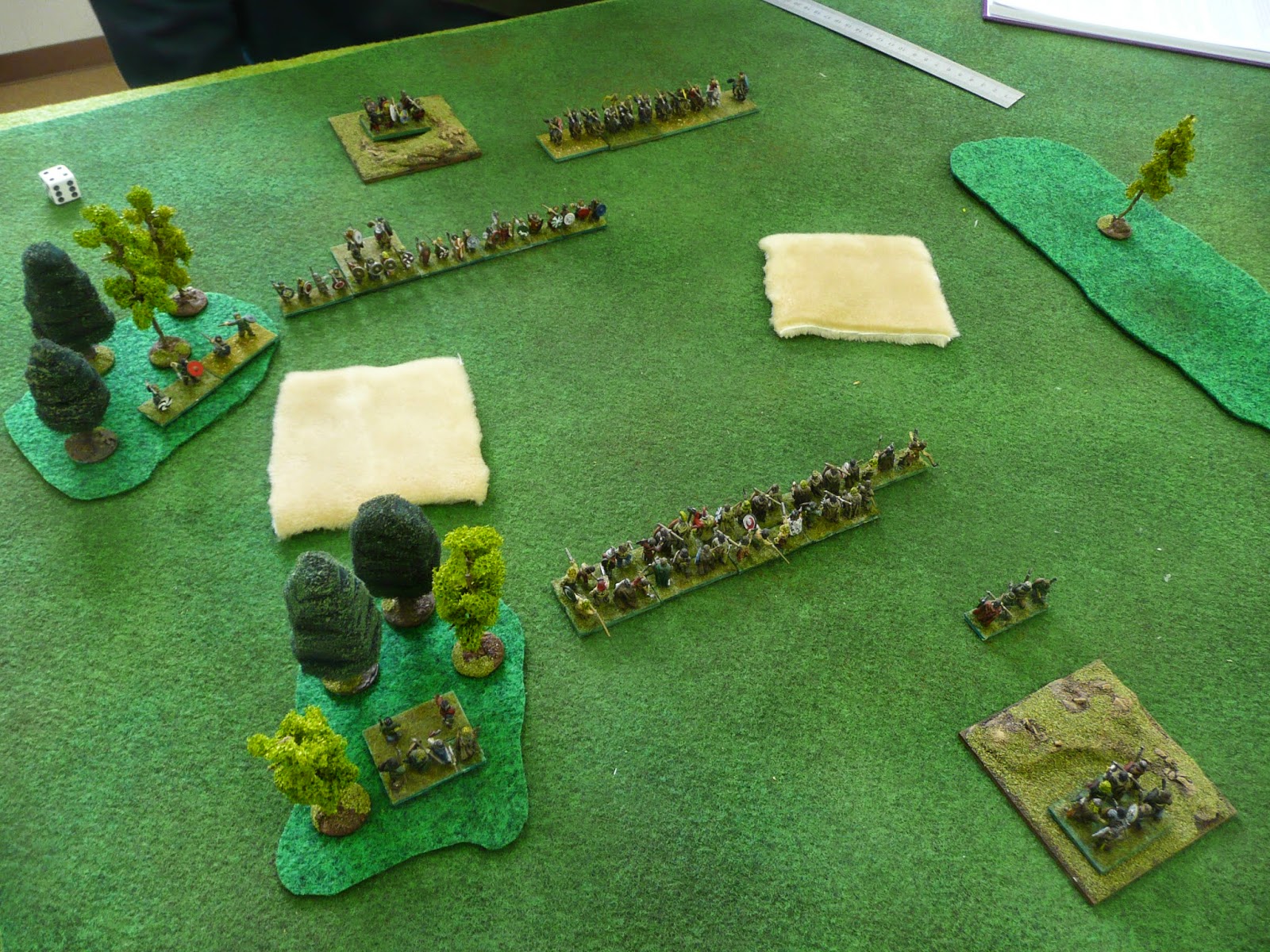 I took the Saxons again, but we couldn't effectively guard our open flank against the Armorican horse and got beaten soundly in this terrain.

Rinse and repeat (should probably have changed the terrain!).

So, three games down and my poor Saxons had taken a hammering.  We decided it was time to bring out the bigger guns - DBA 3.0 in double scale.

Despite some uninspired camp placement from myself as the Gauls (actually, let's not stop there, it wasn't only the camp that was deployed averagely by the Gallic host...), it was nothing that a few good combat dice couldn't remedy.


So, a great day's gaming, and thanks to Luke for making the trip down.

As a final word, I do like Dux Bellorum, but I don't think I'll upgrade to DBA 3.0. It's not a game I'm going to play solo (I still haven't played 2.2, which I went to much effort to track down a copy of a couple of years ago!), but it is nice to have a battlefield uncluttered by markers.  It'll likely be a 'play other people's copies' type of game.  That said, my shelves bear silent testament to the 'oh well, just buy it anyway!' attitude, so I may relent in future.

The other major thing to take away from today's session is the need to get some Shipwreck clarifications.  We really want to get this game working.