On January 4th six fellows turned up ready to play a multiplayer ancients game using some rules I'd cobbled together borrowing ideas from various different sources and adding in a few things of my own.

The Roman side was made up of 31 units totalling 162 points.  The left was commanded by Ben, the centre by Nikolai, and the right by the commander-in-chief, Pat.  The Seleucids, with 163 points in 32 units, were led by Luke on the left, Al in the centre and Matt on the right.

The battlefield was set in a plain between two small rivers, the first of which bounded the Roman position  behind the right flank and the second of which was behind the Seleucid right.  There was a prominent hill just right of centre on the Roman side of the field and a smaller one on the Roman left.  The Seleucid position had two moderate sized hills on each flank. 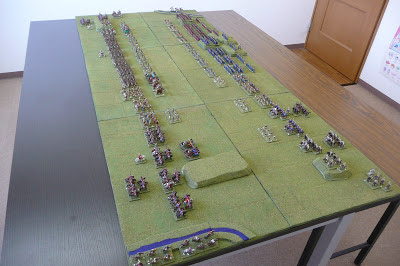 Overview of the battlefield from behind the Seleucid right.

The Romans deployed their four legions and allies in three lines (I know, that's a lot of Romans to be over in Asia Minor, but let's not let that disrupt us!) resting on the river on the right, with only a unit of Roman cavalry and another of Greek light cavalry for flank protection.  With the velites out front, the Romans presented a formidible sight, but that was not all - their Greek allies and the rest of the Roman cavalry extended the line another by 1600 metres to the left. 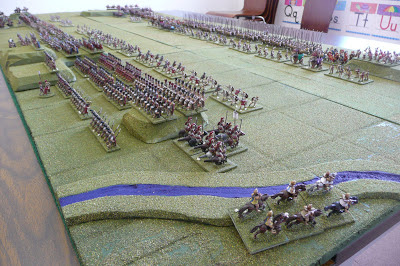 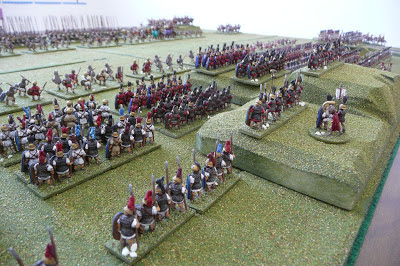 The centre of the Roman line. 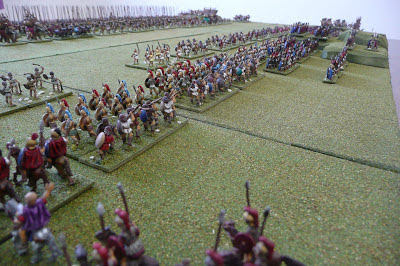 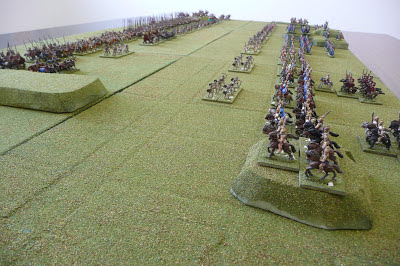 The Seleucids put their phalangites and the bulk of their heavy infantry opposite the legions, resting the left on the hill, with two units of heavy cavalry and another of over-strength light cavalry outside the infantry on the left, giving them a slight edge in horse if they could bring it to bear.  In front of the heavy infantry were units of light infantry, two troops of elephants, and some scythed chariots.   Farther to the right were cataphracts, heavy cavalry, more scythed chariots and light cavalry. 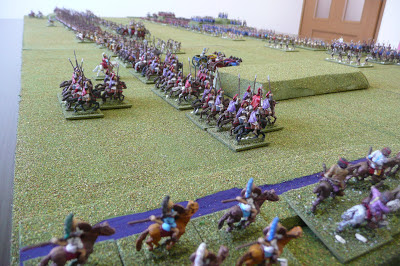 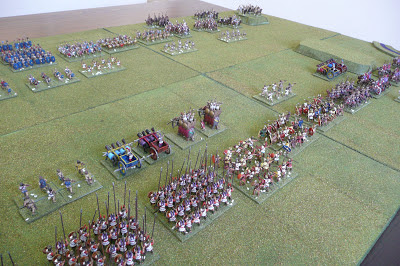 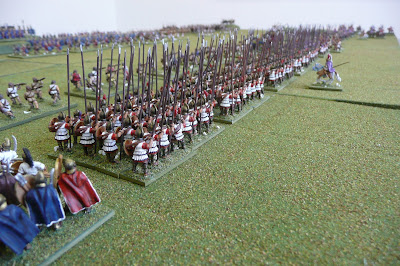 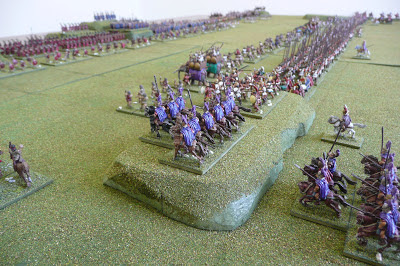 The Seleucid left, resting on the hill.

The Seleucids took the first move, and over the first few turns the light troops get themselves into missile range.  The scythed chariots are sent off to do their worst, and their worst they do, being entirely ineffective.

So too the elephants prove to be a liability for the Seleucid side.  They are unable to do any damage at all to the Romans, but managed to make life difficult for the infantry around them by periodically rampaging, causing a number of hits on friendly units.

On the Roman right some cunning play sees the Seleucid left under early pressure, and this in combination with the elephants' moodiness gives the Romans the early advantage on that side. 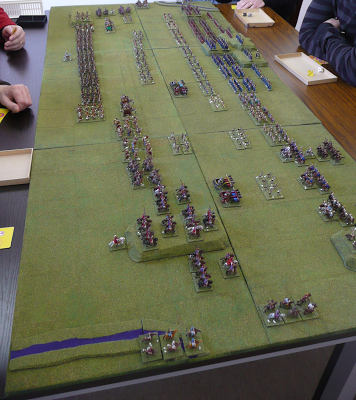 The early going.  Note the scythed chariots and lights streaking ahead of the main Seleucid line.

Over time the main lines move closer and the light troops begin to fall back, leaving the field to the heavy foot.  The Greek allied horse on the Roman left manage to isolate and outflank a unit of Seleucid cavalry that advances too swiftly as the melee there is joined. 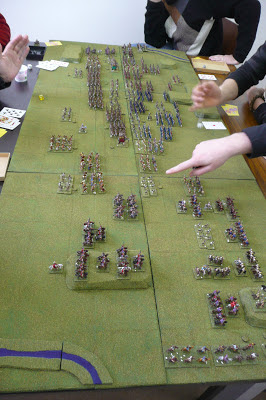 The centres come into contact; the lights begin to fall back; battle is joined on this flank, but the Seleucids appear loath to leave the safety of their hill. 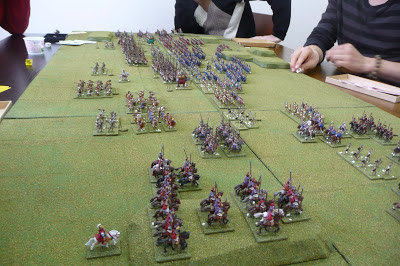 A closer shot of the action in the centre.  The damage markers on the friendly units around the elephant are the result of its frequent rampages.

Before long there is heavy fighting all across the battlefield.  The elephants are finally killed off on the left, but the ones in the centre stubbornly refuse to rout.  On the Roman left a swirling cavalry fight develops with units intermingled and confusion rife.  In what seems like a grave mistake the Greek light cavalry abandons the hill that anchors the Roman left. 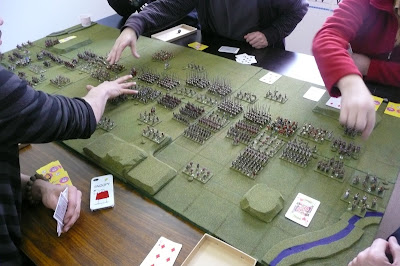 The scene around four turns in, looking from behind the Roman right. 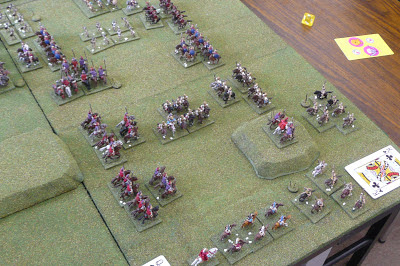 The Greek allied cavalry has abandoned the hill on the Roman left, allowing the Seleucids to occupy the high ground with heavy cavalry.

The Seleucids take the abandoned hill opposing their right, but in so doing over-reach, leaving their forward-most unit of cavalry unsupported.    The allied Greeks take advantage of this, isolating the unit and killing it off, but not before it scores a few hits of its own.

The pressure that the Romans are exerting in the centre finally tells, with the elephant of the centre routing, and the phalanx next to it also going.  A great gap in the line 400 metres wide opens up, and the Seleucids struggle to close it. 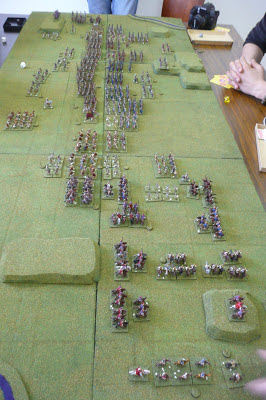 Centre with elephant and intact phalanx... 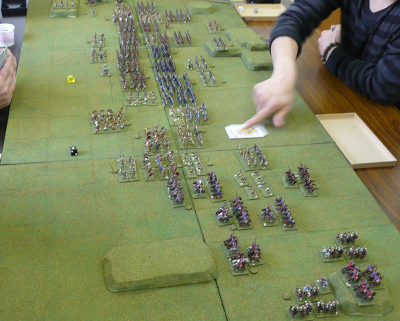 ...and centre without them!

The Seleucids are now in difficulty in all areas.  They have been outflanked on the left, have had their centre blown open, and are also in some strife on the right; but there at least they are there giving as good as they get.  The question is, can they hold the centre long enough for the phalanx to grind the legions down, and can Matt win a victory on the right?

Things get worse for the Seleucids - a daring attack on the left sees the Seleucid commander-in-chief captured and killed.  The army's morale is shaken as a result, and command and control is significantly reduced.  Despite this, as the fight in the centre continues, the phalangites' superior to-hit factors begin to tell.  The Romans have their line exchange, but the phalangites are now getting into their work.  In legion after legion the hastati are withdrawn and the principes move up as the casualties begin to mount.

The problem for the Seleucids is that they are losing too many units across the field, and in combination with the death of the commander, their morale is becoming increasingly fragile. 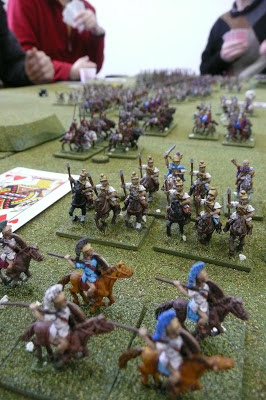 An example of the confused cavalry melee on the Roman left - Tarantine light cavalry under the Seleucid banner smashed in the flank by Thracian cavalry fighting for Rome.

By turn eight the situation is becoming tense for the legionaries as the hits mount and the line thins.  The phalanx has gained superiority at points along the line and the Roman centre is running out of reserves.

But then in the cavalry battle on the left there is a sudden flurry of action: the Roman cavalry destroys a unit of Seleucid heavies and in the subsequent morale test the entire Seleucid right flees the field, taking the phalanx with it. 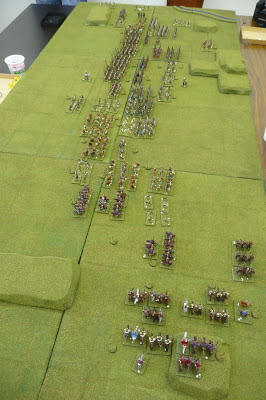 The moment before the rout...

So in the end it was a combination of accumulated losses, the death of the commander and an unfortunately low morale roll that ended it all for the Seleucids.  I would have considered allowing the phalanx to stay on field a little longer if two of the lads hadn't had trains to catch, but I think ending it at the point we did was appropriate anyway, given that the Seleucids had lost a third of their force even before the morale failure.

From my perspective as umpire it was a most entertaining afternoon, and it seemed that the players enjoyed themselves, so all went well.

There are certain aspects of the rules that need tightening up, but they were geared towards new players and I think the rules did what they were supposed to do in most respects.  I was pleased that the players were doing everything for themselves pretty quickly - except for morale tests, which were my job - and my role was soon simply handing out cards, recording losses, answering the odd question and keeping things moving when needed.  Given that three of the six players had never played a wargame before, the standard of tactical appreciation was pretty high, and except for special rules like withdrawal, line exchange and the odd movement subtlety they figured it all out for themselves brilliantly.

So, there we have it - the January war is over, and I've learned a lot from it.  A) how to make better terrain; B) that I can write rules after all; C) that people are perhaps more interested in giving wargames a crack than you'd think; and D) that I'm too old to go out drinking with the young blokes.