"To ensure the safe passage of NATO merchant shipping through the Strait of Gibraltar and on to Isreal, EUCOM (European Command) has ordered the US 6th Fleet to conduct high-tempo ASW operations against Soviet submarines in the western Mediterranean.  With most of 6th Fleet's forces committed in the Aegean Sea, COMSIXTHFLT (Commander, 6th Fleet) currently possesses only two subs with which to commence this sweep... 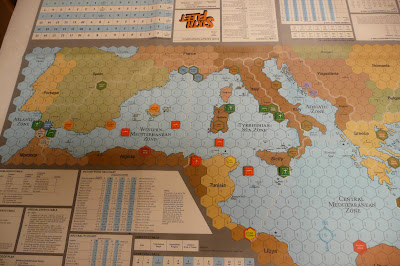 On the morning of day one the Soviets assign their single squadron of Tu16s to detection duties and it begins tracking the USS Baltimore, just north of Naples.  The US assigns two units of Orions to follow the Sumy and the Byngi. 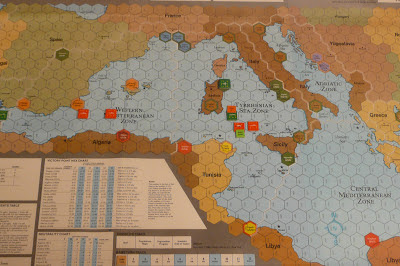 Baltimore is in turn shadowed by the Nezhen.  Unable to locate the enemy, Baltimore makes for the Corsican coast. 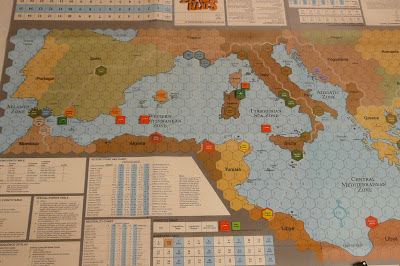 Nezhen's superior speed allows her bring Baltimore to bay under the very noses of the air cover on Sardinia. 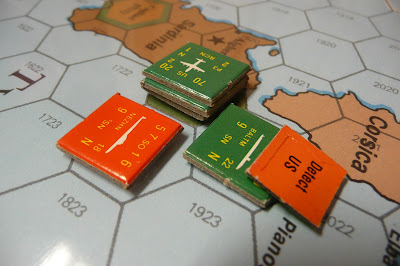 Baltimore desperately seeks to locate the enemy but is unable to do so and is sent to the bottom with all hands.

The Soviets shift focus to the USS Drum, which is detected in the AM by Tupolovs.  The US assigns two units of Orions to the Drabv and the Byngi.

Confrontation is not long in coming. 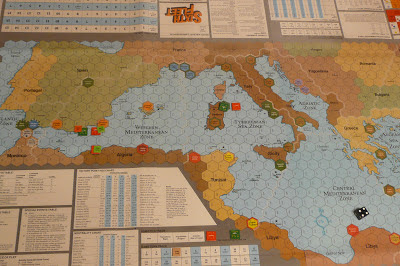 The Drabv is engaged and damaged by USS Drum, but the Byngi is in close proximity. 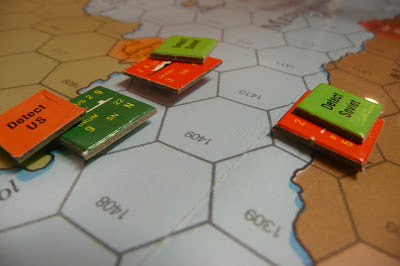 Drum is on her own for the time being and without air support to aid her she sustains damage as Byngi closes and strikes. 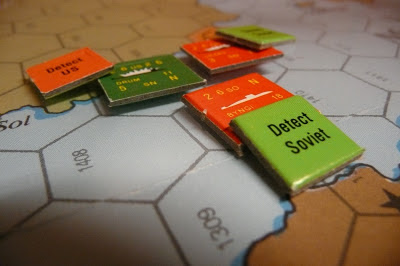 Fortunately, Drabv is too far gone to aid in the attack, and the Drum employs evasive tactics in the hope that an opportunity to strike will open up.

In the meantime, the Orions make an attack at 3:30, but are unable to hit the Drabv.  This is almost the last chance for the Drum, and tension is high as the Soviets close for the kill. 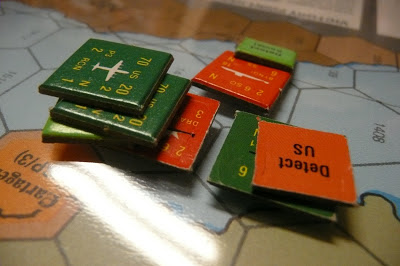 By 5:30 Drum has been sunk.  The Soviets, now unmolested in the western Mediterranean, can begin hunting the supply vessels coming through the Strait of Gibraltar.

This was my first game of 6th Fleet and my amateur tactics are testament to the fact.  By not assigning a unit of Orions to detect Nezhen on the first morning I made a real hash of the strategic air mission choices.  This meant that after destroying the Sumy Baltimore was blind and a sitting duck for the Nezhen, whom she couldn't outrun.

It has been a valuable lesson in the importance of setting the right units to do the right jobs at the right time.

This was a good and enjoyable introduction to the Fleet system, and while it's clearly going to take me some time to figure out good strategies the rulebook is not at all as daunting as you might think at first glance. That the first scenarios introduce players to the concepts in manageable progressive chunks is very useful, and I think 6th Fleet is the best example of this approach I've yet seen.

Next up will be Scenario 2, but I'm not sure if I'll be able to get it done before I'm off on holiday.  We shall see!