Diary of a Solitaire Caesar

It is 300 BC and Rome a small city possessed of some grand ideas. With five talents to play with (legions cost one talent, city building costs two or three, depending on how civilized the territory is) our hero commences carving out an empire.


I expand into North Africa via Sicily, and Gaul via Gallia Cisalpina and Hispania. Everyone tells me that even in these ghastly republican times it's clear that I am Caesar in all but name. 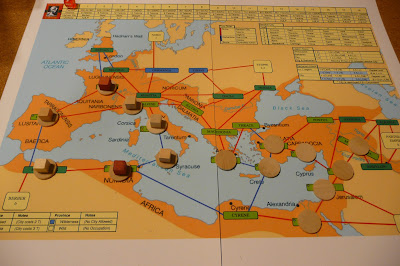 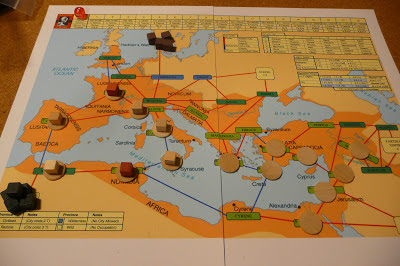 Ha! Puny barbarians.  They will dash themselves on my city walls and fall beneath a hail of pila.


Or not.  Rome narrowly survives a sacking, but we won't tell Titus Livius that.

At turn's end I control four cities, so four points are scored.

The barbarians in their turn dance naked long into the night, but are wary of crossing our borders.  They learn fast.


A grateful senate declares ten days of public thanksgiving and numerous triumphs.  Eight points are scored and the doors to the temple of Janus are closed.

As 100 BC rolls around I find another twelve talents in the treasury and promptly re-open Janus's doors, thus allowing my legions to sweep north from Egypt, verily all the way to Macedonia.  We have some problems with a pesky bunch in Jerusalem, but what's a legion here or there?

After celebrating another four triumphs and ritually strangling a wolf I fortify the northern borders and claim twelve victory points.

A grateful senate considers deifying me, but settles for declaring me father of the nation instead.  Furious, I pretend to refuse the honour.  Someone's going to pay for this.

I have a kind of weird dribble leaching from the corner of my mouth, but my wife assures me no one even notices it.  Thank Jupiter for that!

With another twelve talents to burn I build Caesarias in Macedonia, Thrace and Illyria.  This time the senate does deify me.  I have the censors declare my horse a member of the senatorial order.  How I laugh!

Barbarians demonstrate in a few places and smash the odd thing, but it's nothing to worry about.  Names keep being erased from the map tablet I keep beside my bed, but I'm sure it's just a mistake.  I kill my own mother, just in case.  Twelve points scored.

Someone's been pinching from the treasury.  I reckon it might be my younger brother, so I send him off up north to fight the Germans.  Ooops!  Was that poison in your drink, Germanicus?  How unfortunate!  Ha ha ha ha ha ha.

Capri is nice in the summer.

I learn an instrument and grow my hair long.  They say the Spanish are revolting and I agree with them.  Ten points scored.  I kill that uppity Hadrian fellow.  He was getting ideas above his station.  The larks' tongues taste much better without his endless pontificating spoiling the meal.

Things are going a bit to pot right now.  Personally, I blame the Christians.  I make an example of as many of them as I can and then split the empire into two.  It's getting too big for one chap to handle by himself, as my soothsayer so rightly says.

By the way, those uncivilized people are really starting to become annoying.  It's getting difficult to find a decent cloak these days.  They must be eating all the minks.  Five points.

Frankly, this whole empire thing is getting a bit boring.  I go to Rhodes to study rhetoric.  They all say I have talent.  I learn the flute.  Two points.

I have just got back from a lovely time with the king of the Persians, who invited me to be his foot stool.  Two points.  I close the academy at Rhodes, with a flourish.

I'm kind of holding out for a hero.  I want to go to both cities in my empire, but Pontus is so far!  I wish someone could take me there.  Perhaps I should try to find a Nordic bodyguard.  No one else seems to want to do anything but cower behind walls.

We eventually get there.  How exciting!  One point.

I'm feeling a bit fed up with all of this now.  My indigestion is killing me.  I think I'm going to go and lie down for a while.


After last week's game Pat very kindly gave me his copy of Warriors of God, and in it was the print and play game Solitaire Caesar.  I'd heard good things about it, so I've been looking forward to giving it a crack. Tonight, with New Zealand again performing miserably in the cricket and me as a consequence needing something to cheer me up, I got it to table.  It was excellent entertainment, despite my getting absolutely pounded.  I recommend it highly if you want a bit of solitaire fun.