I am currently enjoying a play-by-email game of Ted Raicer's Case Yellow: the German Blitzkrieg in the West with my email buddy Andrea.

Andrea is controlling the Germans (with razor-sharp precision!) and I am bumbling about as the Allies.  Things are looking pretty grim.   It would have been a lot worse but Andrea has managed to roll a ridiculous number of 1s in his attacks these last two turns, and his terrible luck has been considerably more influential in preventing catastrophic losses than have the actions of this Allied commander!

The panzers have reached the channel coast, so I've now declared Operation Dynamo in an attempt to salvage some formations by embarking them from Oostende and in so doing perhaps gain enough victory points to stave off a German game victory.

I don't think this is a game that I would want to play every week, but it has been very impressive so far to see the Germans in action.

Here's a clickable screenshot of the situation on May 21st (end of turn 3).  To concentrate on the positives, the Maginot line is holding up pretty well! 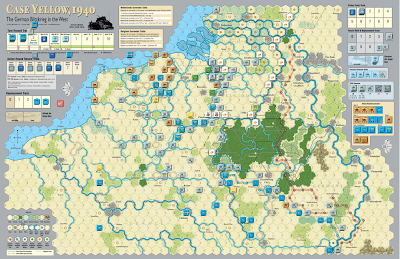