DungeonQuest with the kids

Today was a public holiday so with the kids starting to get restless mid-afternoon I roped them into a game of DungeonQuest.

If you don't know of it, DungeonQuest is an adventure game based around going into a dungeon and - you might have guessed it - finding treasure.  Each player starts in a different corner of the game board and must make his or her way to the dragon's lair in the centre by - here's the trick - drawing dungeon tiles.  These tiles show a room, corridor or tower, with between one and four possible exits.  When you enter a room you will, depending on what kind of tile you turn up, have to pull a card of some description, which might cause an encounter with a monster, set off a trap, uncover some loot, and so on.

It's a bit too fiddly for the kids to play properly, so we used some dad's rules, which boiled down to two key elements: the kids' characters can't die, and they must have fun.

To this end they got to choose a character figure and start on the corner of their choosing.  Each turn they drew a tile and moved onto it.  We didn't use any cards or complicated stuff; it was fun enough for them just trying to put their tiles together in a way that would get them to the treasure chamber. 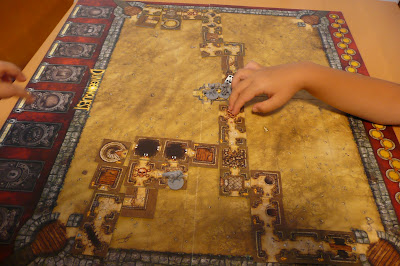 The adventurers on their quest...

Every second or third tile they drew I would reveal a monster figure and place it in the tile they'd just pulled, yelling "It's a (insert name of mythical beast), quick, roll the dice!" and the child in the hot seat would roll until they scored a 5 or 6.

Foreheads would be wiped in exaggerated fashion and exclamations along the lines of "phew, that was lucky!" would be made.

Once both kids made it to the central chamber (their old man was still floundering about near the entrance...) four monsters suddenly appeared, and they had to take turns rolling the dice until all of the creatures were dead. 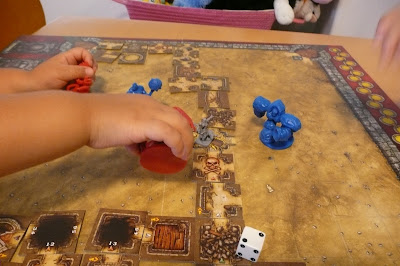 Oh no, it's four creatures flogged from World of Warcraft: the Boardgame!

Both kids seemed to have a great time and immediately wanted to play again.  Not only did they enjoy it, but so caught up in it were they they forgot to get into their usual grizzling match about who got to take first turn, who won and so on.

You wouldn't think it, but a game involving violent conflict made them much more cooperative and agreeable than a game involving matching cards, scoring points for picking up cheese, or saying words correctly.  Maybe there's a lesson in that...

Anyway, judging by the enthusiasm exhibited today, I think this game is one that we'll be able to come back to a few more times yet.