50,000 hits and a celebratory giveaway

After a couple of years blogging we are approaching the milestone of 50,000 hits.   I'm fairly sure that some of them have even come from people other than me (!), so to thank you all I'm going to do a giveaway.

Before we get to the details, I'd just like to say that while this blog's primary function is to keep a record of my wargaming activities, it has also proved to be a significant motivator in helping me to get more figures painted - and these done to a less shameful quality than I was previously accustomed to.

As good as this is, by far the most gratifying by-product of blogging has turned out to be the connections built up with gamers all around the world.   It is a constant inspiration to see what others are up are up to and to have people drop by here to take a look and/or comment is very encouraging.

So, to cut to the chase, as a thank you to all the folks who visit me here, I'm going to do a humble but heartfelt celebratory giveaway.

The winner will have a choice of two items.  For those who like boardgames there is a lightly used but complete copy of GMT's Guilford, the third volume in Mark Miklos' Battles of the American Revolution series.  It's a nice little game containing two scenarios and uses quite an interesting battle mechanism.  The counters are all punched, bagged, and neatly clipped.  It's probably not something you'll want to play every night, but you might get a few good games out of it. 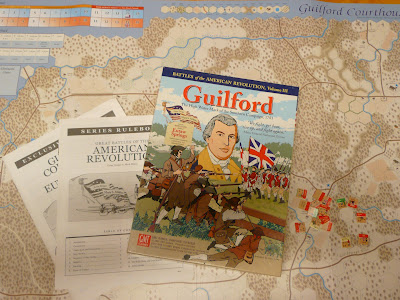 If boardgames are not your thing, you can instead take the poorer cousin: a set of EM4 Miniatures' Old West Heroes.  The box is slightly beaten up, but it contains five pre-painted 28mm figures, rules, and a CD-R with files for a printable western town.  The pre-paints are not going to win the Golden Demon, but they're not bad, and it looks to be a useful set if you like Wild West gaming and light-ish rules. 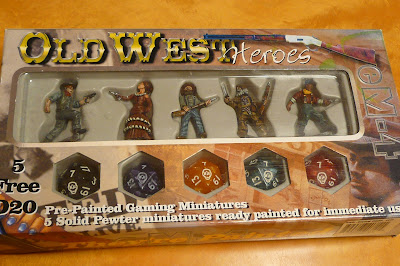 To be in the draw, there are two things you have to do:

1) be (or become) a follower here, and
2) leave a comment on this post saying what your favourite board and miniatures games are.

If you are a follower here but have changed your user name, profile or photo since you became one, you can always 'recommit' to be sure that I don't overlook you by mistake.

Once we get to 50,000 hits, the dice will be consulted to find a winner.  I will then announce the result here and ask him or her to contact me privately with a name and postal address and to indicate which item they would prefer.  After that I will send the game or figures off, hopeful that they will arrive in one piece, but conveniently avoiding all liability if they do not!

The dice roll will of course be done fairly, but people I recognize as especially valued visitors will get the equivalent of two entries in the draw.

There we have it.

Thanks very much again to everyone who has dropped in here over the past couple of years, and good luck!