An email buddy and I have just started a play-by-email game of A Victory Lost, the brilliant Eastern Front operational game by Tetsuya Nakamura.  This is Piero's first attempt at AVL, so it will likely be a learning game; but as I've been experimenting with taking screenshots before and after every activation, I'm going to post these here as a record of how events progress.

To get a general overview of the rules and feel of AVL you can take a look at an earlier post, found here, that I wrote on it back in February.


The screenshot below shows the positions at game start.  The Soviets have strong forces present in the vicinity of 1st Guard Army, 2nd Guard Army and 5th Shock and 5th Tank Armies.  The German line is weakly held in the centre, but there are powerful panzer divisions scattered about the south. 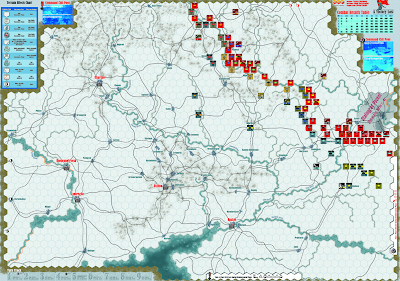 The Soviet attack commences: 6th Army attacks across the Don, dislodging elements of the Italian 8th Army from their positions and establishing bridgeheads for exploitation. 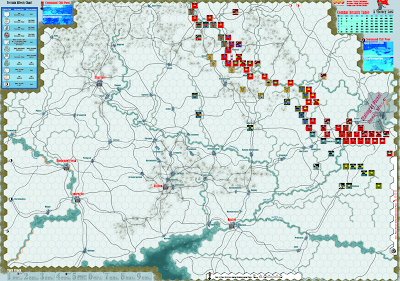 2nd Guard Army advances in the south, but unfortunate circumstances allow 7th Landwehr and 336th Division to hold their positions.  Stalin will have something to say to the random number generators... 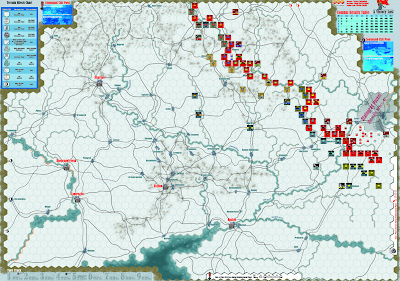 STAVKA is drawn from the chit cup, and the whole of the Soviet line activates.  The Germans are under pressure everywhere.  They are in danger of being overrun in the south, but again the line holds firm.  Grave fears are held for the future of 4th Panzer Army. 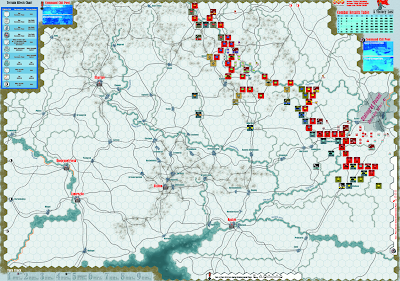 The Rumanian 3rd Army HQ authorises a pull-back towards Millerovo and Morozovsk which gives the Germans some breathing space. 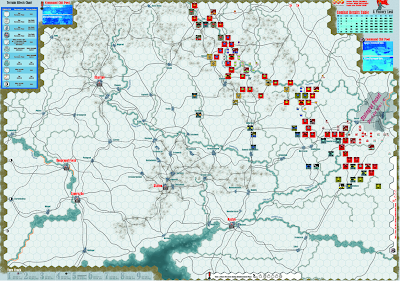 4th Panzer Army at last gets the order to withdraw.  The bulk of the panzer divisions are ordered north, crossing the Don to support Hollidt against 5th Tank and 5th Shock Armies.  15th Landwehr falls back to Proletarsk to hold the Manych River crossing and bar the way to Rostov. 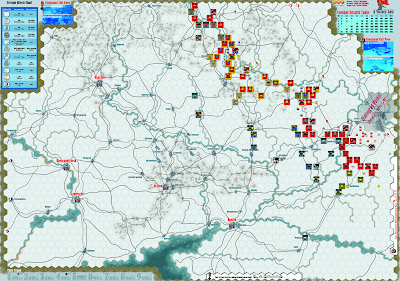 1st Guards Army closes in on the German troops in position at Rossosh in the north, driving back one division and cutting the other off in the town. The centre of the German line has been blown open and the north is in tremendous difficulty. 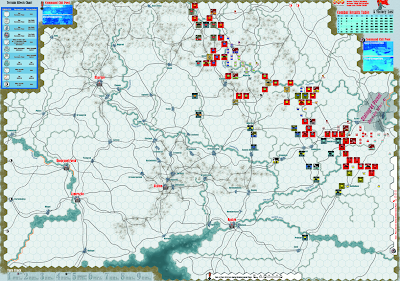 In the south, Hollidt orders a local counterattack north of Tsimlinskaia, giving 7th Tank and 5th Mechanised Corps a bloody nose and driving them back.  The line is briefly restored. 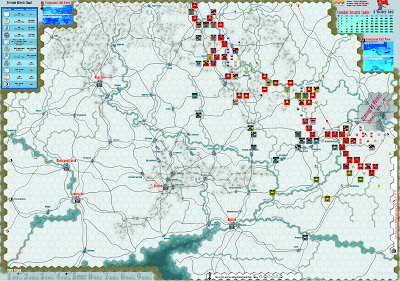 German reinforcements arrive - Kempf rushes north with two infantry divisions while Fretter-Pico sets up headquarters at Voroshilovgrad on the Donets.

Soviet 28th Army is due to arrive on the south-eastern flank of the German position, and elsewhere another tank corps makes its way to support the offensive. 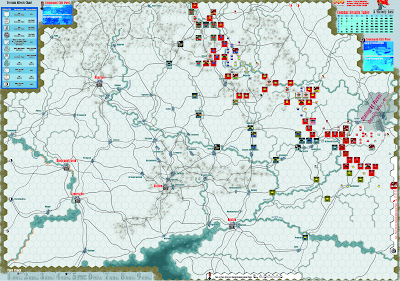 As things are - but dependent on how the chits come out of the cup - the Soviets are primed for success both north and south this turn as there are vulnerable German units at both ends of the line.  That said, the Germans will have 4 chits in the cup this turn, giving them more options and a better chance to fall back to better defensive positions.  Turn 2 will be very important (but they all are, really!).

(BTW, at the time of writing there are about 300 hits to go before the blog reaches the magic 50,000.  If you want to enter the celebratory thank-you giveaway, go to this link and follow the instructions there.)
Posted by Prufrock at 1:03 AM