A Victory Lost with Andrea, Turns 1-4

Here is the start of my PBEM game of A Victory Lost, played with Andrea. You can read the background here 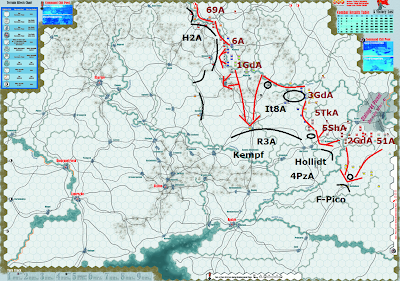 Hungarian 2nd Army comes out of the cup first, which sees the Germans change their positions slightly in the north.  In response, 1st Guard Army sees the opportunity to strike south, either catching the 27th panzer division at Millerovo or heading east to pocket Rumanian 3rd Army and put it out of supply.

5th Shock and 2nd Guard armies drive west and southwest respectively, catching 4th Panzer Army and taking a step off one of the panzer divisions.  Rumanian 3rd army falls back towards Millerovo, where 27th Panzer is attacked by advance elements of 1st Guard Army, losing a step in the retreat.

The Germans are in a critical position.  Hollidt's men have not moved and are in danger of being destroyed piecemeal.  Further south F-Pico takes over command in 4th Panzer Army's sector in the hope that he will be able to extricate the divisions there, where 17th Panzer is out of supply, from their difficulties.

The situation in the north is reasonably secure, as 1st Guard has gone south. 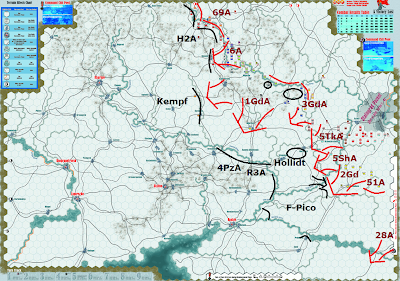 Hollidt launches a counterattack to free the 17th Panzer division trapped at Kotelnikovo.  It is a brave but unlucky attempt, and the division is destroyed soon after.  Near Millerovo the 27th Panzer division is also caught and eliminated by 1st Guard army, and another infantry division with it.
Enough time is bought however for a line to be established - flimsy though it may be - on the Donets.  There is stiff resistance put up in the south but 5th Shock and 2nd Gds Armies continue their march. 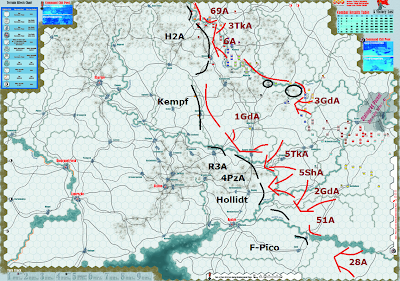 Some bold work from Hollidt and F-Pico sees the remaining panzer divisions in the south make it to safety.  Unfortunately, they are not able to prevent the Soviets from getting across the Donets.  3rd Guards army is in the process of clearing the pockets of resistance behind the lines.  Progress is slow in the north, but the Soviets are able to get some tank units across the river which sets them up for a drive in the following weeks. 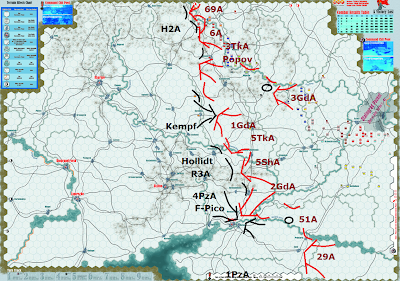 A bloody fight is developing over the Donets, with another panzer division destroyed and Rostov captured.  Kempf launches a feint in the north, and while the Soviets scramble to respond an inspirational counterattack (devised by Manstein himself) recaptures Rostov and opens the road for the reinforcing 1st Panzer army coming up from the south.
3rd Tank Army's arrival in the north coincides with an assault on the remaining Axis forces in that sector, opening the railway lines and allowing reinforcements to reach Millerovo.
The situation is (as it almost always is in this game) delicately poised!
6 German infantry divisions eliminated.
2 German panzer divisions flipped.
3 German panzer divisions eliminated.  VPs 25-15
Posted by Prufrock at 4:33 PM

Email ThisBlogThis!Share to TwitterShare to FacebookShare to Pinterest
Labels: A Victory Lost, after action reports, boardgames