My Favourite Games: A Victory Lost

One of my favourite boardgames is MMP's A Victory Lost.  Designed by Tetsuya Nakamura, its subject matter is the Soviet counter-offensive launched as Paulus' 6th Army was in its death throes at Stalingrad.  The game starts on Dec 17th, 1942, goes through nine turns, each lasting about 10 days, and finishes on around March 18th, 1943.  It thus includes Manstein's famous 'backhand blow' that stabilized the German front.

The game is very simple: blind pull HQ chit from cup, activate units within range of the HQ, move, fight if desired, pull next chit.  The Germans start the first turn with only 3 chits in the cup while the Soviets always have 4.  As the game goes on and German reinforcements arrive, the German chit count goes up, 4 per turn in turns 2 and 3, 5 in turns 4 and 5, 6 in turns 6 and 7, and then they reduce again to 5 and 4 for the final two turns.  They are also aided by Manstein, whose chit, when pulled, can activate any German HQ.  By turn 6 there are two Manstein chits in play, so they can get quite a bit of momentum going.

The Soviets also have some special rules for their chits.  They have STAVKA, which activates all Soviet HQs at once and is obviously very powerful; but to balance this, at the start of the game the Soviets must secretly select 6 of the 12 HQ chits they have available, with the others being discarded.  The discarded HQs stay on the map but cannot be put into the chit cup.  This means that the Soviet player may only put combinations of these 6 chits into the cup.  One of them of course will be STAVKA, but as you can imagine, deciding which of the others to ready for action makes for some interesting choices.  You will often find that you'd like to have x HQ chit in the cup, but if you didn't choose that one early on, tough luck!  The later game can become a nightmare if you are unable to activate the HQs you'd like.

The game is won by controlling territory and eliminating enemy units.  The five victory cities are worth 5 VPs for whoever controls them.  The Soviets get 1VP for each German (not allied) infantry unit eliminated and 3VP for each panzer or motorized division knocked out.  The Germans get 1VP for each Soviet tank unit they destroy.

The Germans have the advantage of interior lines, greatly superior mobility, powerful panzer divisions and more flexible commands, but the Soviets have numbers and surprise on their side.  It's a very different game depending on which side you play, and even though the rules are simple there is great depth to the strategy.  The usual pattern is for the Germans to get pounded for the first three or four turns, but if they can survive that early stage their powerful reinforcements and increasing chit count will allow them to launch some fearsome counterattacks without the Soviets being able to do very much about it.

The game I'm playing now is with my Italian play-by-email buddy, Andrea.  No matter what game we play, not only is he a thorough gentleman, but he's also a tough and determined opponent.  Although this is his first time playing the Germans (and it really helps to have had experience with them before to be able to play the Germans well) he has handled the situation with no little skill.

This is the set up.  The Soviets' main strength is in the 1st Guard Army, 5th Shock Army and 2nd Guard Army regions.  The Germans have to decide which three HQs they will put in the cup.  Do they try to pull back in the north or concentrate on getting their panzer divisions out of danger in the south?  It can be a tricky choice. 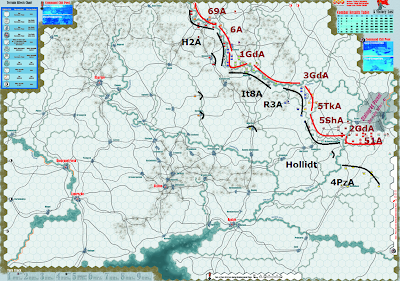 Cities in red type are VP cities.  It's also worth checking out the roadways (crucial for fast movement) and the railway lines (which bring reinforcements).  Bridges across the river are of course very important, as are the supply sources (see symbols in the north for the Soviets; in the west for the Germans).

You can find the report on turns one to four here.  Hope you enjoy!
Posted by Prufrock at 4:30 PM