Planning for a Modern Spearhead game

My wargaming buddy in Osaka, Luke, is putting on a game of Modern Spearhead for me at his this weekend.  We'll be using Keith McNelly's scenario generation system and Luke's newly painted Czechs and Poles, with me taking the Poles this time around.  This will be the third MS game we've played, but the first with figures, and I'm very much looking forward to it.

Moderns has not been my area in the past but I've warmed to it and after spending the best part of a week with my army OOB and the rules I haven't any excuse for putting up a bad show.  It's been a challenge working out how the various weapons systems interact, but I'm thoroughly enjoying myself (and feeling like I'm learning a thing or two to boot).

Here's the map that Luke has sent me of the battlefield (click to see a larger image).  Each square is 12" x 12".  We will be fighting over five objectives: the two towns on the river, the two road-junction towns, and (exceedingly kindly!) the hill in the centre of my position.  It will be a meeting engagement, so both sides will be on the attack. 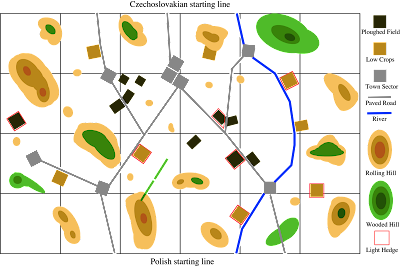 Right now I'm working out what support platoons should be attached to which battalions and thinking about what my initial orders will be.

Luke has a knack for putting together beautiful battlefields, so no matter whether I do OK or slink away with my tail between my legs, the game will be a spectacle!
Posted by Prufrock at 1:28 AM