Last Sunday I ventured up to Luke's with rules and OOBs for 1979 in hand.  I'm not quite sure what the back story was, but it was not my job to worry about that - my task was simply to follow orders and pit my two regiments of Poles against his two regiments of Czechs in open battle.

Below is a photo of the table, with my orders superimposed.  Two battalions were kept in reserve; one of motorized infantry in the centre and another of T55s on my left.  The plan was for my very large tank regiment (the 18th), with one unit of motorized infantry protecting its flank, to engage the bulk of the enemy forces head-on.  The remainder of my forces would then slam the engaged enemy in the flank, allowing us to sweep towards our objectives: the town in the centre and the river crossing.

That, at least, was the plan. 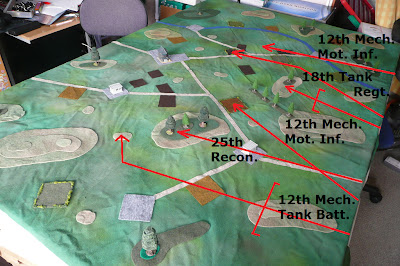 The crafty Czechs had a somewhat different idea about how to proceed.  From what I can gather, it looked a little like that overlaid on the photograph below... 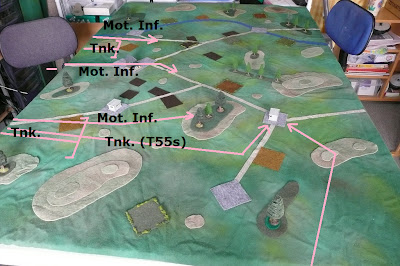 The units arrived on the table in staggered fashion (and not just because of the lunchtime beer).  First my recon, then two of my mechanized battalions, which proceeded towards the river and the 'Vodka Gap' respectively.  Luke then brought on two Mot. battalions of his own.  One of these secured his left (top of the picture above) and the other the town in the centre. 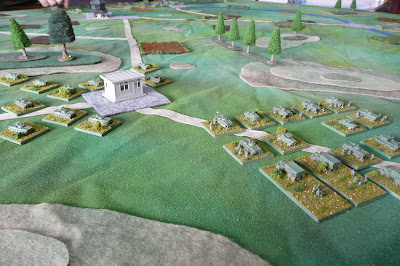 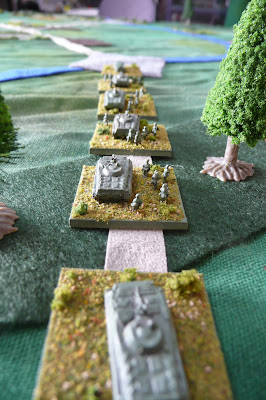 Elements of 2nd Battalion, 12th Mechanized.
On turn three my other two battalions from the 12th Mechanized arrived; T55s into a reserve position on my left and the Mot. Inf. into reserve in the centre.

Luke then brought on his T55s and the remaining unit of Mot. Inf.  These were both positioned on his right or right centre. 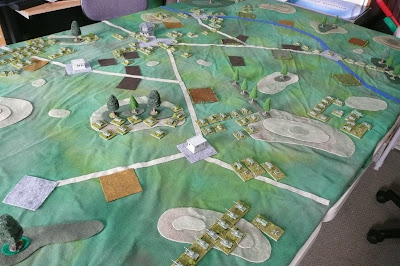 Turn 4, looking from the Polish left.
My recon won the race to the hill, where they proceeded to call down fire from above upon the hapless enemy while mostly avoiding getting hit themselves.  On the Czech left two platoons of T72s got into a nice little firing position on artfully positioned rises which combined with some anti-tank to began causing casualties amongst the BWP-1s and OT 65s on my right. 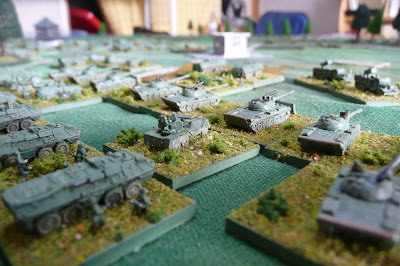 Czech mates.
Turn five saw my tank regiment arrive on table and the commitment of my reserves.  The T55s on my left were ordered to make for the Czech formations advancing on the recon unit and my infantry in the centre were given timed orders to secure the hill in front of them and later drive the enemy before them. 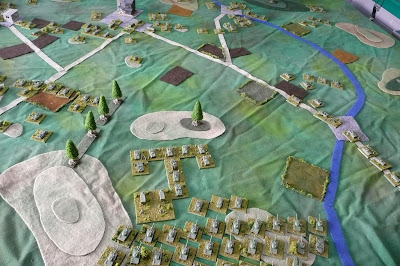 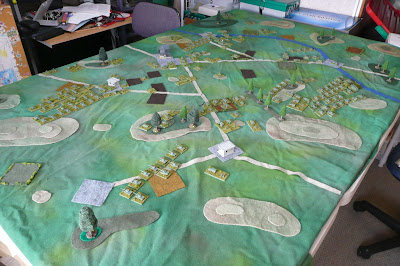 Things are looking promising!
It was just at this point that Luke declared he had a flank march to roll for.  It needed a six to arrive this turn.  I laughed. 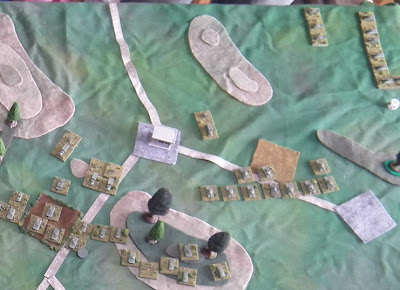 Flank march drives in from the rear quarter of my T55s...
(Photo courtesy of Luke, who kindly signed and framed a hundred copies for me to send to selected acquaintances)
We were now in a pretty pinch.  To make things worse, Luke had managed to locate my regimental HQ using electronic doodackies, and promptly blew the HQ to smithereens with counter battery fire.

In some areas however we were still doing all right.  We managed to successfully order our central motorized battalion to relocate left to fight off the flank march.  The right was advancing steadily - and was giving as good as it got in the fire exchanges - and we were holding our own in the centre (or we were until the fire phase arrived, at which point our recon on the hill found itself in range of some T55s!). 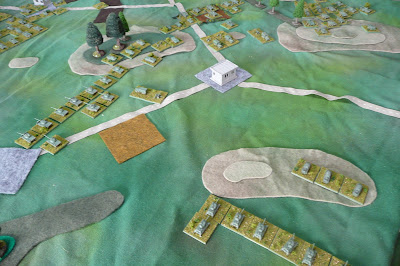 The recon try to get off that blasted hill, while the T34s deploy in the foreground... 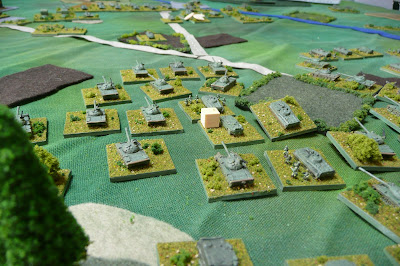 Meanwhile, the advance continues on the right.
The T55s on our left kept advancing in the hope that they wouldn't draw the attention of the T34s to their rear.  Unfortunately, we forgot about that next turn and halted to get stationary fire - with predictable results! 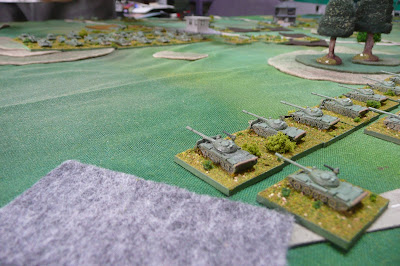 The T55s get their last shot in.
We did have a successful artillery phase just prior to this though, in which a forward observer called down fire  that knocked off seven platoons and suppressed a further two.  It wasn't enough to save our tanks though - they got caught like a sausage in a sandwich.  'The Polish got it wurst', was the call. 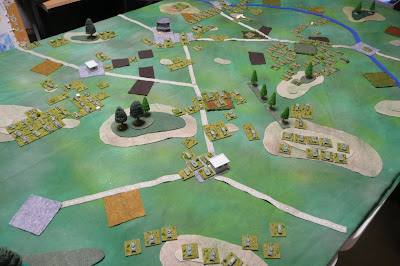 The battalion-sized gap where my T55s used to be!
At this point it was time for me to catch the train home, so we called the game.  We had not really got to grips properly on the right yet, but our left was in grave difficulties.  If the motorized infantry could get their ATGWs into action against those Czech flankers we might be in with a chance, but there were more where that came from so it was not going to be pretty.

In the end it was clear points decision in favour of the Czechs.  Well done to them and to their esteemed commander, to whom I shall leave the last word on the battle! 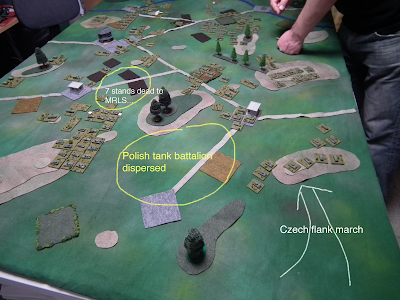 Thoughts:
It was a lot of fun, even though we didn't quite get as far through as we'd have liked.  It was great to see so many of Luke's beautifully painted figures on the table, and I do enjoy the Spearhead rules.  In the modern version it can seem a little as if you sit around waiting for the arty to do its work (or it does when your plan fails as badly as mine did!), but Luke's flank march showed that in the end tactics still have their rightful place on the battlefield.  I do wish there were some way to shorten the artillery phase though and to bring more skill into it.  As it stands it's just point, roll dice, and hope.  I suppose though that it does require skillful positioning of recon/FO units, but it still does seem a lottery, and a powerful one at that.  Perhaps smaller games with less artillery are the way to go in the future.


Lessons for me:
Don't be so aggressive; set up firing zones.  Keep getting lucky with calling in rockets and remember that Luke likes to flank march.  Finally, don't commit reserves too early...

Thanks to Luke and family for the game and the hospitality.  It was a most enjoyable day.  I must also thank Keith McNelly and Robin Sutton for their pre-game advice, and apologize that I didn't heed it more carefully!