Continuing on from the last 'brown wash' post, I'll just show some examples of what happens in later stages of the painting.  To recap, the composite shot below shows a figure primed grey and then a figure with the brown wash. 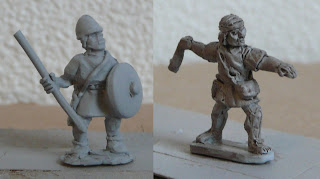 Notice how the wash brings out detail in the figure, showing the folds in the clothes, the eye sockets, the lines of the fingers, hair and so on and so forth.  When block painting in the next set of colours the recesses can be left unpainted to allow the brown to show through, or a thin coat of paint can be used to still leave dark patches where the recesses are.  A thick application of paint can also be useful at times if it is not desireable to have brown shadowing in a particular area.
The second series of pictures shows three more miniatures at different stages of the painting process.  The first has had the skin blocked in with a very dark mix of flesh and brown earth (to match existing figures) which will later be given mid and highlight coats.  The tunic has also been painted a dark sandy yellow, and by leaving the brown to show through in the deeper folds the need for later, time-consuming washes to create depth is eliminated.  It can also be seen that the brown wash here was much darker than that in the preceding example. 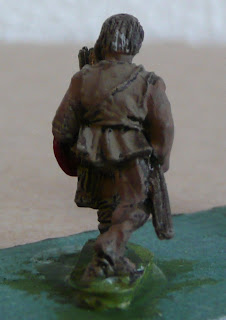 Our second sample figure has also had a dark flesh coat put on while the tunic has been given its mid and  highlight coats. Note how clearly the wash has delineated the different details on the figure: the tunic, the arms, belt and the sword sheath. It makes block painting very easy when the lines are this clear, and it looks neat and tidy when completed (provided that one stays within said lines of course...).  Unfortunately, it does also show up lazy prep work, like the long unfiled ridge on this poor fellow's arm! 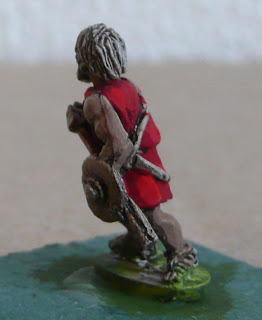 The third figure has only had the mid coat for the tunic applied, but I'm showing it so that it's possible to see how the wash acts on armour.  The mail here is sculpted a little crudely, but it will scrub up well enough given a couple of coats of Tamiya smoke to add a black, faintly metallic sheen.  That will probably be all that's necessary to have the armour looking the part.  Again, the darker wash prevents any trace of the primer showing through, clearly marks out the different areas of the figure and its equipment and will make painting the rest of the figure significantly easier. 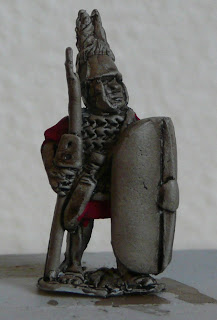 After the block painting and the highlighting has been done, it's time to consider whether any more washes are needed.  With a command figure I might give a coloured wash to a cloak or tunic, but I usually won't bother to do that with ordinary troops unless they are particularly nice figures or I've botched up somewhere along the line.

Mistakes are fairly easy to avoid (and easy to correct if they can't be avoided) when painting is done in a logical sequence and the old hand is reasonably steady.  To this end, experience shows that a gin and tonic is a far better aid to a steady hand than a third cup of coffee, but perhaps that says more about me than I would like!  I usually do mid coats of tunic and flesh first, followed by spear or javelin shafts, shoes/sandals, weapon sheaths and crests.  Then I do a quick black or Tamiya smoke wash on spearpoints and blades.  This is followed by highlights for the flesh areas; then I'll do the belts and the tunic highlights.  The order will change at times, but that's the basic formula.

When painting and washes are done, due consideration must also be paid to the dip.  While that is for another time, I'll just say that it works very well on pteruges and on lighter natural colours, so I tend to use it more for figures on which these items and colour schemes feature.

Finally, here are some shots of completed figures that were done using the wash technique.  You'll notice that these are all rank and file figures, as my main purpose is to paint large lots that are 'good enough' as quickly as possible.

On each side we've got Greek javelinmen and the central figure is an Illyrian light cavalryman.  These figures are not first-class jobs, but hopefully they illustrate the strengths and weaknesses of the brown wash technique.  In my opinion these look fine on the table, and they are nice and simple to paint. 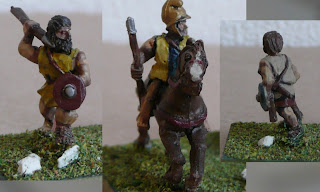 Well, that's about it for the brown wash section.  I'll have a think about which technique to look at next.
Posted by Prufrock at 3:04 PM