A friend came round today for an afternoon of wargaming and we decided to give Warhammer Ancient Battles a go.  We put together two 3000 point armies with 15mm figures based for DBx and used a ruler I'd made up for an Armati conversion on which each inch was reduced to 17mm.  This seemed to work pretty well.

Here's a shot of the deployment (as usual, photos can be enlarged by clicking on them): 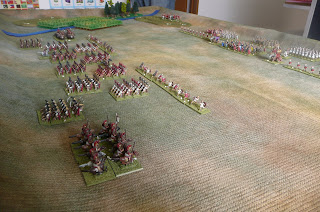 And another shot, this time from the Carthaginian side. 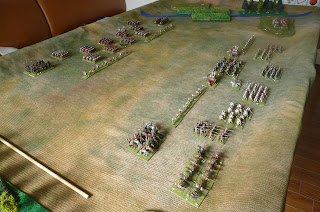 Shaune started off confidently, advancing his elephants and warband early to commence the assault.  It was a very good move.  Although here we see one of the elephants rampaging... 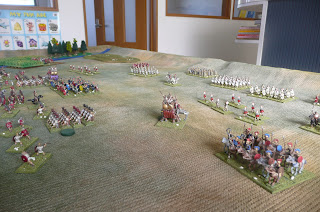 ...it was not before they had made such an impression in their approach that all but three of  the callow Roman legionary units had fled in terror! 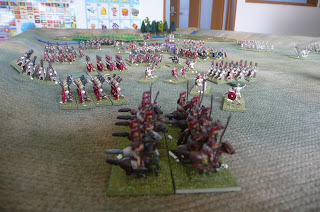 While the Romans attempted to rally their centre before it fled off the board, the warband and other elephant destroyed one of the few units of hastati that had decided to stand its ground. 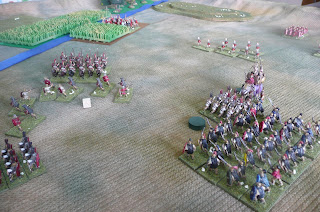 The warband were in turn hit by the returning troops with results that were not pretty.  Out of respect for common decency the following shot shows the charge rather than the carnage that ensued: 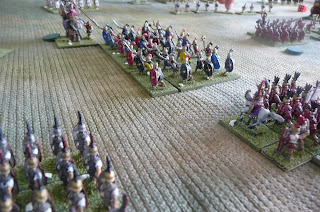 The cavalry eventually engaged on both flanks with the Romans getting the better of it due to the presence of the rampaging elephants as these effectively prevented support from being brought up to aid the Spanish and Punic horse.  With important help from Shaune's shocking dice rolls, the enemy cavalry was beaten off.  Huzzah! 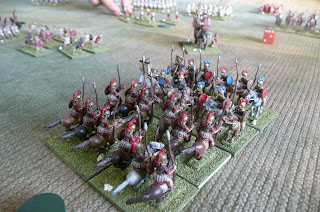 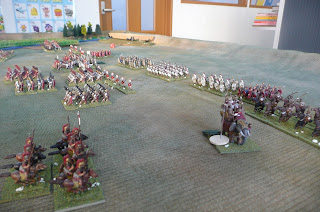 The hesitation induced by the great beasts allowed time for the Romans to rediscover their mettle, with the situation in the centre largely restored (barring three units which had hied off over the lip of the pool table  back towards the camp). 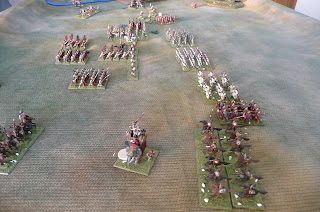 The centres now engaged in a whirling fight with outflankings and outflankings-of-outflankers aplenty.  The final situation saw rough parity achieved in the centre, but the damage had been considerable and we decided that the Carthaginians had done enough to carry the day.  Well done to Shaune! 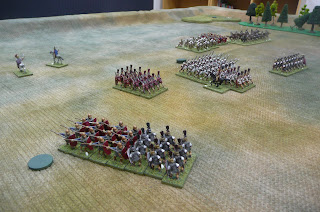 It was a lot of fun, and we didn't do too badly to finish a 3000 point battle in about four hours on our first time playing, I thought.  We weren't too religious with rules interpretations and no doubt did a few things wrong here and there but it was no matter and the game was played in great spirit.

As a final note, the conversion of the rules to 15mm seemed to work fine so we'll give this a go again.

All in all it was a most successful day!
Posted by Prufrock at 11:05 PM