Have got a few more Italians done over the last couple of days. These chaps are (again) from the Strategia e Tattica Polybian Roman range, and although they are nominally hastati in attacking poses, they are going to be used primarily for my Roman Civil Wars armies, and have been based accordingly. With their mix of equipment and different coloured tunics they could be locally raised legions pulled together in a hurry, renegade Latins, slaves armed and fighting for their Roman masters - or slaves fighting against their Roman masters - Roman-trained Numidians, deserters in the east, disaffected Italians fled to Sertorius, Spanish armed as legionaries, ruffians gathered around Catiline, toughs pulled in to intimidate a crowd on voting day, etc etc. In short, they could be anyone or everyone. Should be quite useful, I think. 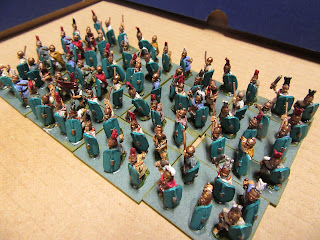 The painting is nothing special; I just wanted to get them done. 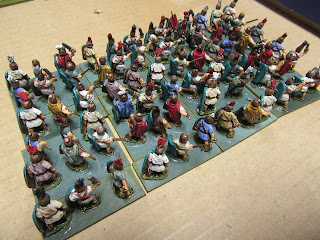 They can be fielded as six units of 12 if veterans, or four units of 18 when poorer quality.