With the 'primed-and-ready-to-paint' boxes almost empty, I've been rummaging around in cupboards looking for figures that a) I feel like painting, b) might be useful and c) won't require spray priming in the current summer heat and humidity.

Fortunately, I found a box of Republican Romans I got in a deal with someone, and on looking more closely saw that all the cavalry was ready for paint, so I decided to make a start on those.

I actually feel a little guilty about this lot.  It is made up of a mixture of Chariot and Strategia e Tattica 15mm figures, which is a bit of an unusual combination. I know, because I did a post here suggesting that the two go together reasonably well.  Anyway, someone had bought selections of figures from the two lines, primed them, and then decided that they didn't really want to paint them up after all. I saw him advertise this fact, got in contact with the chap, and bought them off him.

The guilt comes from my wondering whether my original post (which I'd also put up to a wider audience on TMP) had been somehow instrumental in him making the purchase, and then of course in his being disappointed.

I hope not, but in any case, the best way to deal with the situation is to paint them up and use them!

So, to the painting.

These were done a little differently to my old style of painting Romans. I didn't bother with washes or stains prior to painting; my conversion to the dip method means that I now leave that to the end.

I did the horses in various shades, did the browns, the flesh, then cloaks in different reds. I did give a quick black wash on armour and spearheads, then painted on the bronze and silver. Shields were next, then plumes, belts, horse furniture and, finally, whites on the tunics and pteruges. There was a little highlight for cloaks and plumes, and then it was time for the dip. 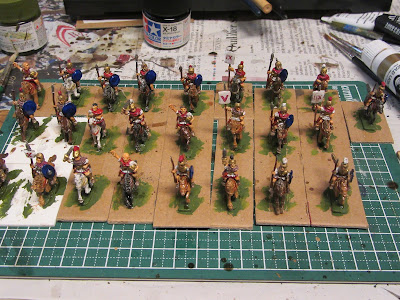 There is quite an over-representation of command figures in this lot, but I'm sure I can find a use for them! 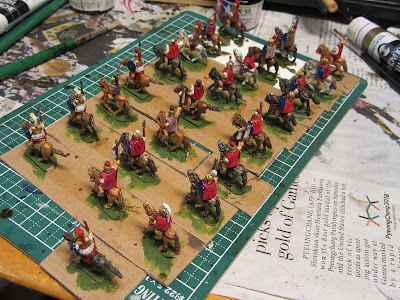 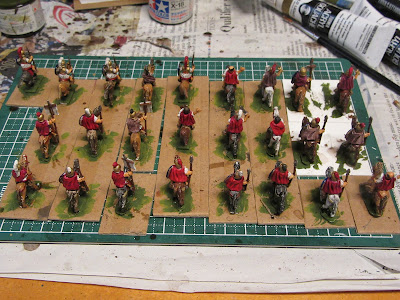 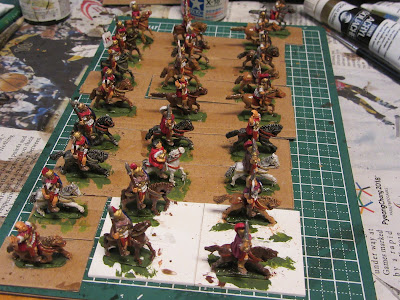 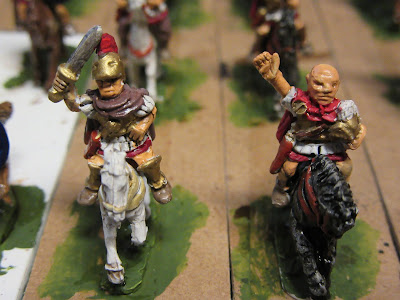 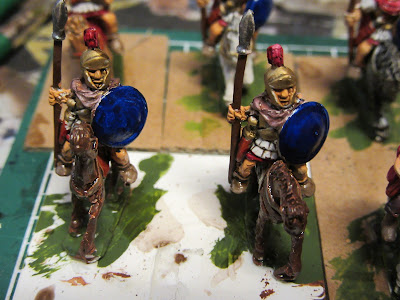 The photo above shows the problem that comes from skipping the pre-paint wash step I used to do - you can see I've missed a couple of spots on the hand and scabbard. If I'd used a brown wash to begin with those would not have been so obvious. Fortunately, due to the wonders of digital technology I've now seen them and can go and fix that up! 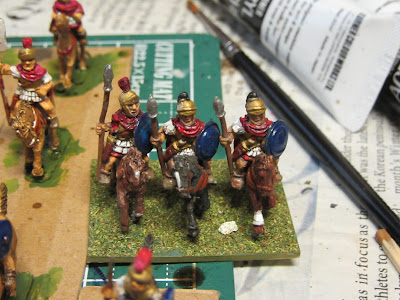 Here is a comparison with the older style painting. 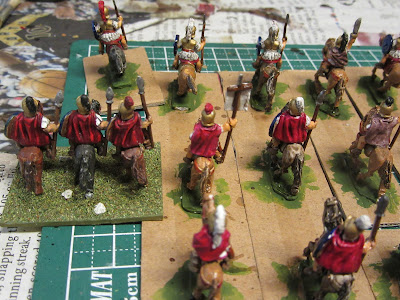 You can see that the cloaks are darker and the folds more pronounced. I do quite like the slightly more cheerful look of the newer paint jobs though. Six of one, half a dozen of the other...

To finish these completely I'll bash out a few blazes and socks on the horses, then it's a case of waiting till autumn so I can give them a hit with the spray varnish.