It's been quite a while between drinks, but I've finally managed to finish off the final 16 Quick Reaction Force cataphracts I bought about seven years ago (note the quaintly optimistic 'I hope to get a unit finished in time for my game on Friday.' If the Friday in question were two years later, I might've had a shot!).

The first lot was finally finished in 2014, but it wasn't a great experience to prep and paint them and I now see it's taken me four years to do the rest.

They have a lot of flash to remove in tricky places, and require spears. Unfortunately, the hands don't lend themselves to drilling, so you just sort of have to glue and hope. On top of that, I didn't really enjoy painting the armour, had other figures I could use in the meantime, and just sort of put them off, then put them off again. 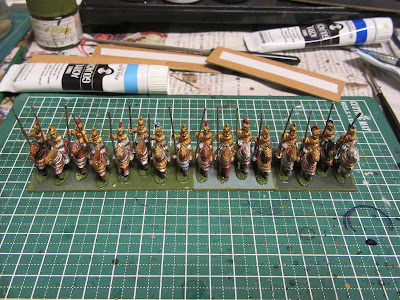 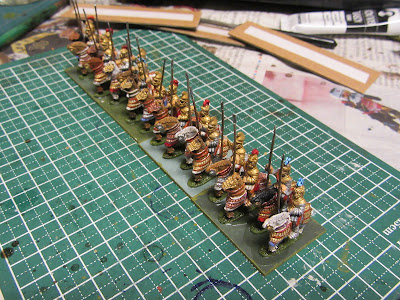 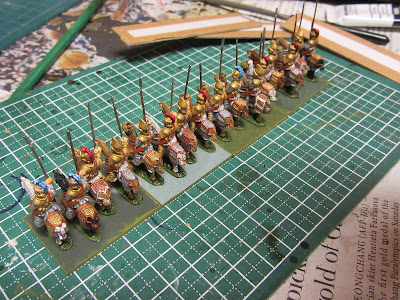 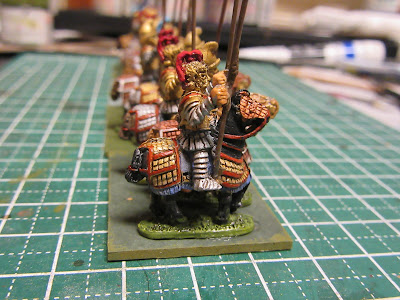 And to finish, here they are with their cousins painted in 2014. I thought I'd done a better job on the new batch, but they don't really look all that much different! These will have to wait for their coat of matte varnish. Summer here is not kind to sprays, and nor is winter, which is what the season was when I finished the last batch. I'll have to give both lots a nice going over with matte when spray conditions improve...

Thanks for viewing, sorry for the whinging, and may all readers' cataphract models be completed in a far more reasonable time frame!
Posted by Prufrock at 12:45 AM