As promised some time ago, here are some comparison shots of my Strategia e Tattica Polybian Romans matched up with some figures in the same scale from the Chariot range.  Chariot are of course sold by Magister Militum, while Strategia e Tattica can be found on their home site in Italy and are also carried in the UK by North Star. 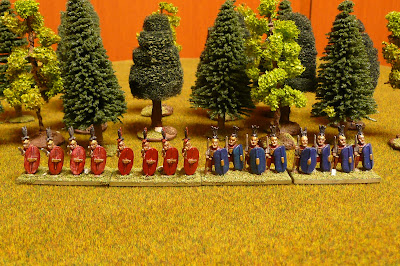 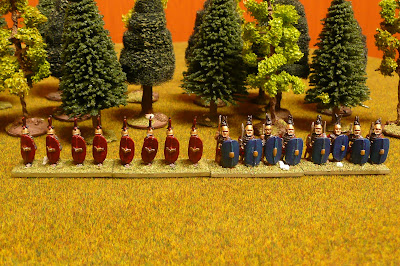 Moving on to the triarii now, you can see that the Chariot shields are very narrow here, even by comparison to the other figures in their range, and while the figures are quite nice to my eye the moulds are aging and there was terrible flash on the figures.  In the close up you can see there is still some unwanted flash on the shields and faces that I was unable to remove.  It's not quite so obvious to the naked eye, but it certainly is here.  The SeT triarii are again a good match in height and chunkiness.  They also have good variety in their standing poses, and make an impressive group, in my opinion. 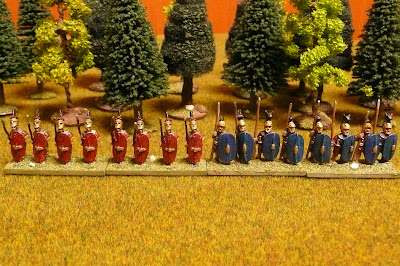 Lastly, we have the velites (the cavalry will have to be posted another time - they aren't painted yet!).  These figures are a very good match, and I actually use them in the same unit. The shield are almost the same size and the height and chunk match well, as per usual. 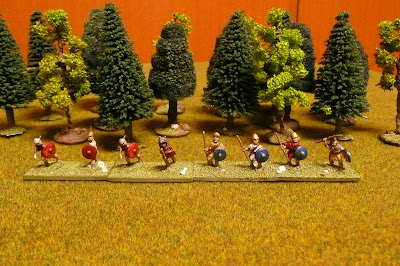 In conclusion, the heavy infantry figures work quite well as different legions/alae in the same force, and the velites can be mixed together in the same unit to create a nice selection of compatible poses.  Overall, I prefer the SeT hastati and triarii, with the Chariot principes having the edge over their SeT counterparts at this stage.  That might change when the second batch, with its better overall sculpts, is painted up.

I would certainly recommend the Strategia e Tattica infantry for anyone looking for some different figures for their Polybian armies.
Posted by Prufrock at 12:10 AM