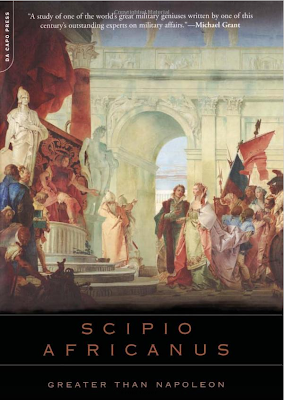 (Image taken from Amazon.com)
Basil Liddell Hart, the somewhat controversial British military theorist, published this biography of Scipio Africanus in 1926.  In it he narrates and celebrates Scipio's many achievements and, as the subtitle "Greater than Napoleon" intimates, argues that the Roman deserves a place in the foremost rank of the great generals of history.

"Scipio's battles are richer in stratagems and ruses - many still feasible to-day - than those of any other commander in history", he writes.  Study of Scipio's campaigns, he continues, is still relevant, "because the moral objective was the aim of all his plans, whether political, strategical or tactical".

As the above quotations are taken from the preface, it can be seen that Liddell Hart states his position early, and from it he does not budge.

The book covers the whole of Scipio's career, from his heroic intervention at the Ticinus through to his retirement from public life.  The author makes frequent use of anecdotes from Livy and Polybius - often quoting long sections verbatim - to tell the story of Scipio's rise.  All of the battles and campaigns are covered in some depth, as are his motivations, so far as they are known.  His actions, exploits and stratagems are explained, interpreted, analysed - and in some cases rehabilitated - in a engaging manner.

One of the interesting things about Liddell Hart's treatment of his subject is that it is not composed in isolation. Scipio's career is portrayed not just as an example of great generalship but also as an illustration of twin themes: that heroic failure is more celebrated that unleavened success, and that successful prosecution of war requires a keen understanding of the relationship between mental, physical and moral elements.

These are themes to which he returns elsewhere.

But if we put aside our reservations about didacticism, the narrative is clear and interesting.  Aided by helpful geographical and battle maps, the wargamer is able to clearly envisage the events described, and I found it gave me a better understanding of the events, particularly those in Spain, than I received from either Lazenby or Goldsworthy.  As mentioned before, he uses a lot of direct quotation from Livy and Polybius, so a more learned (or more cynical) man than me might say "you may as well just read the original texts"; but as an interested amateur I appreciated the way in which he weaves his own commentary into the narrative, giving a good sense of the strategic significance of the events described and providing a welcome overview of the course each campaign took.

I found the book complements other sources on the era, and as long as the author's biases and didactic purpose is taken into account it provides a useful and readable account of Scipio's career.  While a lot is made of Scipio's character, there is enough focus on the military exploits to give the wargamer plenty of material to work with.

In short, if you are interested in the man and the era and can find a cheap copy I would recommend it, but I do caution against taking Liddell Hart's conclusions wholly at their face value.

The Strategy of Indirect Approach

Why Don't We Learn From History?
Posted by Prufrock at 11:13 AM